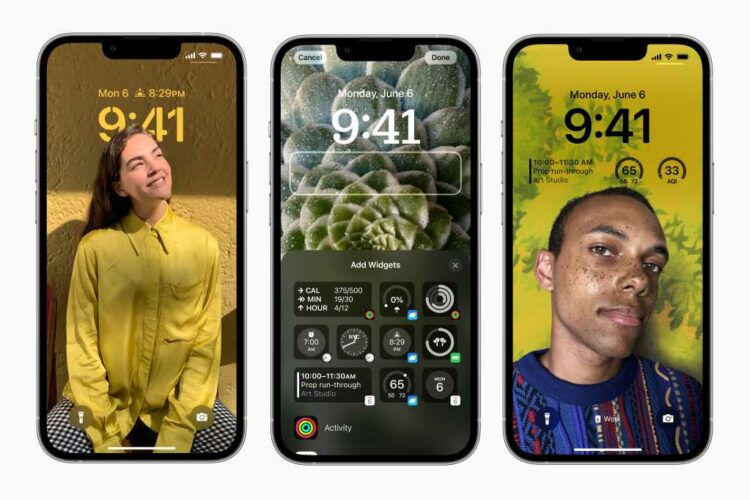 With iOS 16, the lock screen of your iPhone is much more than just a long list of alerts and a clock over your background. Here, one can change the font and color of the clock on the first screen that appears on the iPhone. Adding widgets to the lock screen will also give rapid access to an application or information. On September 12, Apple released iOS 16. Here, one can install it right now. After users updated, the redesigned lock screen received a lot of attention, and for a good reason. Simply put, using it is too much pleasure.

Therefore, let’s take a look at everything one needs to know about selecting a dynamic wallpaper, personalizing the clock. As well as adding widgets in the sections below.

How to set a personalized interactive wallpaper

Widgets are a crucial component of the iPhone’s new lock screen experience. But the entire setup begins with the ability to change wallpaper and clock. Even before unlocking the iPhone, it’s possible to do some fascinating things with lock screens, photographs, and the clock.

Making a new lock screen will bring up a screen with a variety of wallpaper selections for you to choose from. Suggested Photos and Photo Shuffle are other sections in Apple’s Featured section that include handpicked wallpapers.

How to alter the clock on the iPhone lock screen

Return to the edit overview by long-pressing on the iPhone’s lock screen. After that select the Customize option below. Especially the wallpaper you wish to modify. Tap on the time again to reveal eight font choices. To see a preview of how it will appear with your specific wallpaper, choose from the available fonts.

You’ll notice that the time hides behind an object in an image if your background is a photo. You’ll also notice no widgets below the clock. Although not all photographs can take advantage of this special feature, when you can, it’s very cool.

How to Install Lock Screen Widgets on Your iPhone

Apple and third-party developers can design widgets that you can set on your lock screen so that you can access glanceable information without having to do anything. Other than waking your iPhone. Or else you can quickly peek at the always-on display if you have either of the new iPhone 14 Pro models.

Developers could start submitting app updates that make use of iOS 16’s new features. It includes the new kind of widget as soon as it was released in early September.

Modifying the data that a widget displays

Once a widget is added to the viewing area, you can tap on it to change the information that it displays.

When you add the calendar app to your lock screen and then tap on it again. However, you will automatically be prompted to choose a specific calendar to use.

Especially in contrast to the calendar app’s default behavior of showing you all of your upcoming appointments. The simplest approach to determine whether a widget offers additional customization is to add it. You’re stuck with its default information if nothing appears.