How to Play Checkers: A Complete Guide on this Game 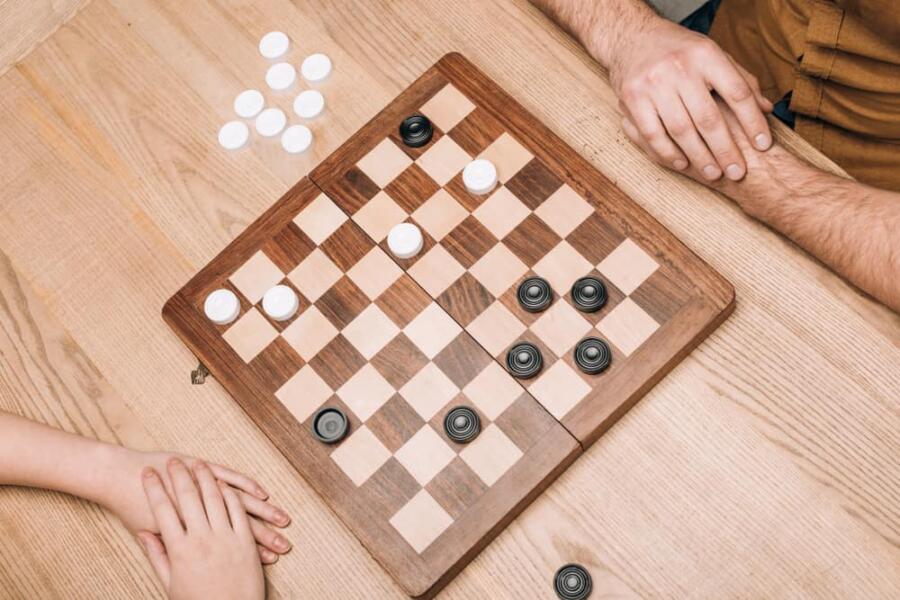 Draughts, or checkers, is a simple and entertaining game that has been played since the 12th century. A checkers game aims to stop your opponent from moving by capturing or blocking their pieces. Jumping your opponent’s pieces and taking them off the board will let you move more quickly. While checkers’ basic idea is straightforward, there are ways to increase your odds of success. So, if you don’t know about the game of checkers or how to play checkers, then this article is a must-read for you! We’ll go through checkers’ basics with you and will guide you on how to play checkers!

In this article on how to play checkers, firstly, we’ll talk about game setup.

Put the board in between you and your opponent as you sit across from each other. The board should be positioned so that each player has a light-colored square in the corner of the board on their right side. In eight rows of eight, 64 squares on the board alternate between dark and light. Both the light and dark squares total 64.

Have them arrange their pieces on the 12 dark squares in the first three rows closest to each player. These three rows should each include a total of four checkers. Keep in mind that on the dark squares, checkers are only allowed to move diagonally.

Each participant has five minutes to move during a game of checkers in a competition. Before you start a game of checkers, set a timer near the checker’s board if you wish to time each other’s moves to keep the game moving.

You’ll take turns moving when the player with the black checkers has made their initial move, followed by the person with the white checkers. During a standard turn, just one checker may move diagonally forward. Checkers must stay within the shadowed areas.

You can jump and take your opponent’s checker if your checker is on the diagonal spot closest to your opponent’s. Move two diagonal spaces in the direction of the checker you’re assaulting, as if you’re hopping over your foe’s piece, to capture a checker.

Put one of your captured pieces on top of a checker to crown it as a king checker. The dark squares allow the king to move forward and backward diagonally, making it simpler for your king checkers to capture your rival’s checkers.

To eliminate all of your opposition’s checkers from the board, keep jumping and grabbing them. When all of your adversary’s checkers have been caught, you have won the game!

If we are talking about how to play checkers, then you must be waiting for some pro strategies and tactics to increase your chances of winning the game.

Beginners might be inclined to keep their pieces near the board’s edges and avoid their adversary’s checkers as much as possible, but this is a bad idea. Instead of specializing in guarding your checkers, focus on capturing your rival’s checkers. If you manage to take more of your adversary’s pieces than they do, it doesn’t matter if some of your pieces are taken.

Maintaining a full back row is the most effective technique to stop your adversary from crowning his pieces. Your opponent will have a piece crowned and harder to grab if they move it to your back row. Additionally, it will make it simpler for you to stop any enemy pieces from getting close to your back row.

You should concentrate on crowning as many pieces as possible while preventing your opponent from crowning any of his. As you progress in the game, this should be your priority. Crowning your pieces, however, should avoid the loss of numerous checkers along the way. Be informed about when to crown your piece.

If you can, try to block his active pieces so that he must use pieces from the back row to play. The game is over if all of your adversary’s pieces are immovable and blocked. Working on seizing more of your opponent’s pieces or winning your own can also be productive.

Watch a professional checkers player live or on television. You can learn a lot by simply seeing how a pro moves their pieces around the board. Pay attention to what the specialist performs in specific circumstances.

So, here, we taught you how to play checkers, game setup, rules, strategies, and tactics. These above-mentioned instructions will surely help you understand or, say, win the game of checkers!