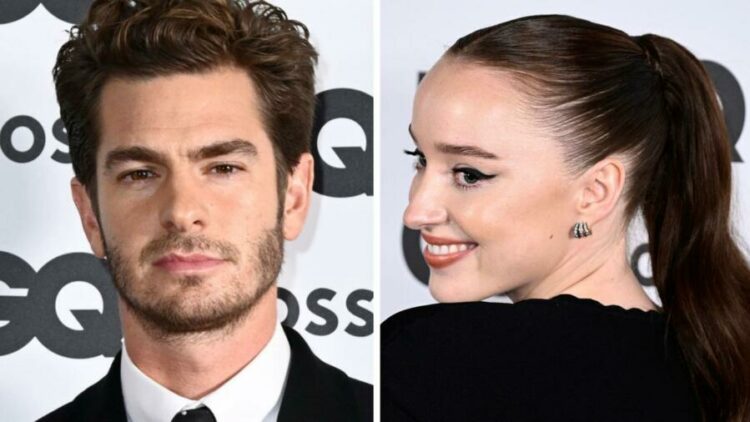 At the moment, the world is seething with romance rumors of the Spiderman: No Way Home star and Bridgerton actress Phoebe Dynevor. Thus, it appears as if Andrew Garfield is off the dating market for now. According to a report by The U.K. Sun, the Hollywood heartthrob, met The Color Room actress at the GQ Man of the Awards. It took place in London. The two met on Wednesday, November 16, 2022.

Let us tell you that the media outlet informs us that the two of them have been inseparable ever since then. Indeed, theirs is one whirlwind romance. They instantly started to grow fond of each other.

Reports are saying that Andrew Garfield is dating Phoebe Dynevor

The two met each other at the GQ Man of the Year Awards. Reports have it that the media spotted the pair getting cozy at the after-party. The after-party was happening at London’s Mandarin Oriental Hyde Park Hotel. Let us tell you that an insider divulged to the media outlet that Andrew and Phoebe clicked straight away. They were in sync right from the start.

Indeed, there was an immediate attraction that’s electric in nature. They happen to know each other through various acquaintances in the business. In fact, they have plenty of qualities in common. Thus, it is the sweetest kind of journeying into an inseparable bonding.

Indeed, the two of them departed from the star-studded event together. The source further added that this is surely no one-off encounter. In fact, after taking their departures together from the award ceremony, they are behaving like a proper couple.

Also read: Check Out How Simone Ashley Landed The Role in Bridgerton

Before Andrew and Phoebe started getting romantically drawn towards each other, The Eyes of Tammy Faye star was in a relationship with model Alyssa Miller. However, the two of them parted ways owing to their busy schedules. The erstwhile couple dated for almost eight months. In fact, we even saw them together at February’s Screen Actors Guild Awards.

In fact, he stated another very sweet thing. He asserted that he believes we would love absolutely anybody if we happen to know their story. Indeed, this statement rings true.

Before making fresh headlines because of dating rumors with Andrew Garfield, Phoebe Dynevor was linked to the Saturday Night Live comedian Pete Davidson. The pair shared a relationship for almost five months. However, they separated earlier this year, in August. At that time, a source revealed that Pete and Phoebe’s romance was a true whirlwind.

The source went on to say that both of them were totally committed right from the start. However, things changed and the two of them are no longer together. The source also stated that their love was wild while it lasted and that they both really can’t stop caring for each other. However, the distance has affected their sweet, earnest relationship.

Thus, this factor of distance is not only true to them but also personal to many of us. Thus Pete and Phoebe’s erstwhile love story possesses an universal appeal. The source sheds light on how distance nibbles and slowly eats away an otherwise fulfilling relationship.

Also read: Tristan Tate: All You Need To Know About Him