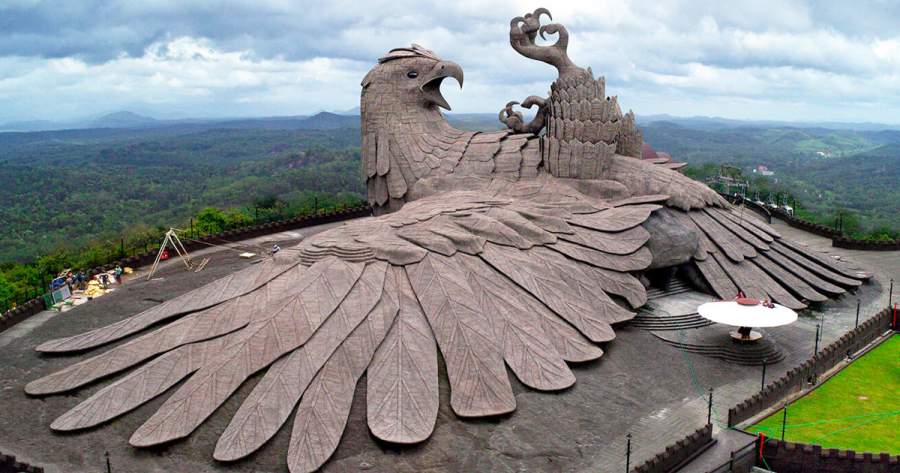 India is a land of wonders. Here, you’ll get to see something fascinating in every few steps. One such fascination that has lately grabbed the world’s attention is Jatayu bird sculpture. People from all over the world flock to capture the sight of this mountainous bird sculpture. Being the largest sculpture in the world literally spellbinds the people. If you’re already intrigued and planning to visit Jatayu bid sculpture, let me tell you the location.  It is located in the God’s own country atop rocky hills of Chadayamangalam in Jatayu adventure park of Kollam district.

How to get there

Since it is located on the peak of a hill, you’ll need to use ropeway to get there. The other option is the helicopter ride. In fact, it is better. With the helicopter, you can capture the bird’s eye view of the sculpture from the high above. To reach Jatayu Adventure Park, you can hire the local cab and taxies. Kollam is the nearest railway station and Trivandrum International airport is the closest airport, which is respectively 38km and 51km from the park.

Size and construction of the sculpture

Other than its stellar craftsmanship, the thing that makes the sculpture notable is its giant size. The statue is 200ft long, 150ft wide, and 70ft high. Having such a colossal size, it the largest bird sculpture in the world. The sculpture is designed in the vulture shape with every single feature. In fact, it imitates a real vulture. Of course, the size is much larger, but the features are exactly like a real vulture. You would be surprised to know that it took almost 10 years to construct this grand bird sculpture.

The story behind its name

There is a story behind the name of every place and so it with Jatayu bird sculpture. The historical saga of this statue is associated with the Indian epic Ramayana. In Ramayana, Jatayu is depicted as a noble and divine vulture. He is known to rescue Seeta Maa, the wife of Lord Rama when demon Ravana was abducting her. While rescuing her, Jatayu battled with Ravan and lost one of its wings.

After losing its wing, where it fell down, the place was called Jatayupara. Today, this giant statue is built in the same place. Since Jatayu lost its life fighting for the dignity and honor of a woman, Jatayu sculpture is built high to pay a tribute to it as well as its respect for the women. The statue also represents the unconditional love between humans and other creatures of the earth.