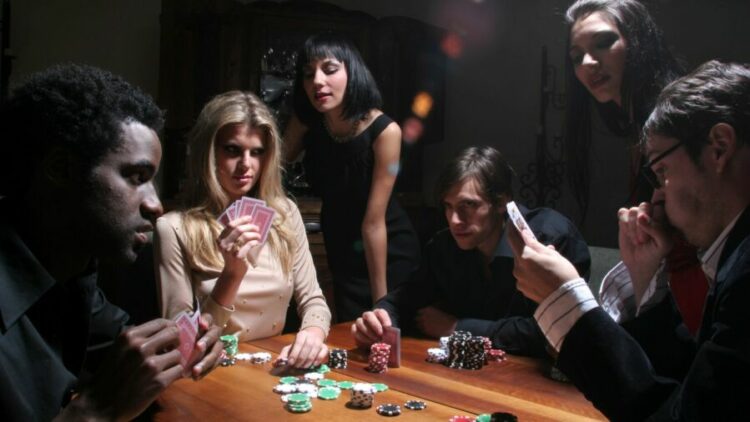 If you enjoy playing poker, would you like to increase the bets? Consider playing a flirtatious and mature version of the traditional card game, where adult players risk losing everything they own—and possibly more. When playing strip poker, participants bet on clothes they are currently wearing.

By the time the game is over, several players are typically down to their underwear or even naked.

Instead of offering the game after everyone has assembled, make sure that everyone is an adult who is willing to participate. If they choose not to participate, bringing it up at the moment could make some individuals feel awkward.

2. Suggest a game of strip poker and make certain everyone agrees

If someone doesn’t want to engage, don’t pressure them or make them.

3. Agree on the rules of Strip Poker

Decide which of the strip poker variations listed below you wish to play.

4. Make sure everyone begins with nearly the same amount of clothing

Make participants remove or add accessories until everyone is wearing an equal amount. For example, if some girls wear dresses and the guys wear socks, ties, and belts. Even though this is optional, it improves game fairness.

Poker is a well-liked card game in which players are dealt cards and wager on the potency of their hands. People play it with a standard deck of playing cards. Make sure your buddies understand how to play and rank the standard poker hands—starting with the high card and moving on to pairs, flushes, four-of-a-kind, straights, a full house, and so on. There are several well-liked poker variations, but not all are ideal for strip poker.

6. Deal cards and play hands as you would in poker

The goal of strip poker is to maintain your clothing as the losing players take it off one piece at a time, unlike standard poker, where you play to earn chips or money.

The game isn’t fun if you can’t enjoy losing and winning, so have fun with it! Maybe do a flirty dance when it comes time to remove a significant piece of clothing.

8. Keep playing until someone is entirely naked, or possibly until everyone but the winner is down to their underwear.

This marks the game’s usual end. After a winner is announced, everyone should get their garments back!

1. Let the winner choose who strips

This variation is excellent for revealing flirtations and crushes that are going on behind people’s backs. Play each hand as usual, and at the end, the player with the highest hand gets to pick one group member to remove a piece of clothing.

2. Bet clothes instead of chips

Deal out the hands and allow players to wager on an item of clothing instead of using chips; anyone who wishes to call must match the bet with an article of clothing of equal or greater value. Players that don’t have strong enough hands may fold. The players that stayed in and lost the battle took off the clothing they bet.

Play a standard game of poker with chips or real money bets, but permit players who are out of chips to trade in their clothing to the bank or another player in exchange for a loan of chips. This game variation features betting, bluffing, and strategy the most closely.

4. Play heads-up with your lover

Although strip poker is traditionally a group activity, you can modify it to become a fun foreplay activity with your partner or potential paramour. Deal out the hands and make the results visible since only two players exist. The person who has the lower hand loses an item of clothing.

1. Stop the Strip Poker game if someone gets upset

Ensure that everyone is participating in the game out of pure enjoyment and don’t make anyone stay who doesn’t want to. Cut your losses and let everyone go back to the house if something happens to spoil the positive vibes.

Seeing someone else see them naked while playing strip poker with your loved one or a buddy you find attractive can make you feel uncomfortable. You may spoil the game for everyone very quickly if you act petty or furious, so control those feelings.

3. Don’t sexualize or objectify other players

It’s acceptable to flirt a little, but overdoing it will turn off everyone.

Follow the rules carefully, and you are all ready to play your best poker!

Also read: What are Some Secrets to Know About Online Casinos in Canada?

Tags: How To Play Strip Poker

How To Become a Better Casino Player