Labrador Vs Labradoodle – Which One is the Right Breed for You? 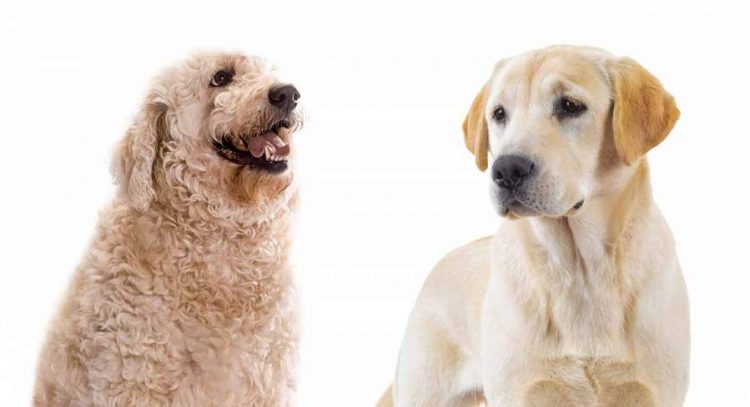 1. Difference Between a Labrador vs. Labradoodle

The Labradoodle size varies based on the size of the Poodle as below:

Labradoodles can be anywhere between low-shedding to non-shedding. Labradors are known to shed a lot since they have thick straight double layer coat that does not catch falling hair. Labradoodles have the gene of a Poodle parent as well hence they have curly thick coat which catches the shed hair before it falls hence reducing any allergen.

Both the breeds are loving and affectionate hence you will definitely end up with a dog that is a mix of both.

Labradors are intelligent, friendly, affectionate and love to be around family and are friendly with starters as well.

Labradoodle is a mixed genes dog, hence its temperament depends on the dominant gene. The generation of this breed will affect its nature. If it is F1B generation Labradoodle, then it has 75% Poodle traits this means they will be intelligent and affectionate but not very friendly with strangers. Whereas a first-generation Labradoodle will have the best of both breed traits.

Both of them are family dogs hence you cannot go wrong there.

Both these dog breeds need a lot of exercise physically and mentally. We are talking about standard sized Labradoodle. Medium and mini breed of Labradoodle require low to almost no exercise.

Both Labrador and Poodle come under 10 of the smartest dogs. This only means they can be easily trained. These dogs have people-pleasing traits, which means they will want to get trained. Also, they are not small dogs; hence, it is essential to train them before they become full-sized.

Labrador generally has a lifespan of 10 to 12 years, and a Poodle can live for 10 to 18 years. This means a Labradoodle has a minimum lifespan of 10 years and may live longer.

The Bottom Line- Which Dog Is Right for Me?

Well, both dogs are friendly and a good family dog choice. They have their own traits, and it is up to you to choose the ones that suit your family’s needs. If someone in your family is allergic, then a Labradoodle should be your default option. If not, pick anyone, and you will get immense love and attention from your furry friend.

Also read: The Benefits And Costs of Dog Ownership For Young Families