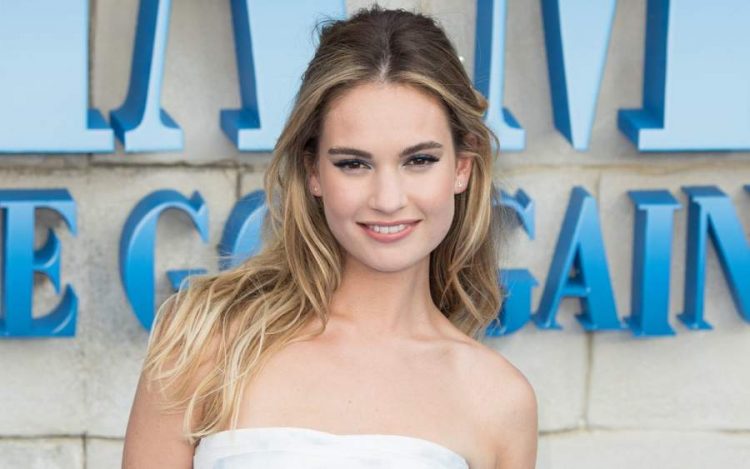 Lily Chloe Ninette Thomson also known as Lily James is a popular English actress. She attended the Guildhall School of Music and Drama located in London. She started her acting career in the TV series Just William in 2010. Then she became notable for her role in the Downtown Abbey series. After that, she got the chance to play in Cinderella live-action move in 2015. This film became her breakthrough role. She is 31 years old now. Recently, she acted in many excellent roles. Know more about Lily James Biography.

The birthplace of Lily James is 5 April 1989 and her birth date is Esher, Surrey. The names of her parents are Ninette Mantle who was an actress and the late James “Jamie” Thomson who is a musician. She has an elder brother and a younger brother. The name of her grandmother is Helen Horton who was an actress.

From a young age, she wanted to become an actress. She went to Tring Park School for the Performing Arts and then to Guildhall School of Music and Drama located in London. She graduated from the school in 2010. Later she signed with the Tavistock Wood management for her acting career.

James’ first acting stint was the BBC production of Just William. Then she acted in Secret Diary of a Call Girl in 2011. Then she played the part of rebellious Lady Rose in the historical drama Downtown Abbey. She also acted in many stage adaptations of the plays. In 2015 she came to Cinderella and also sang the songs in the film. In 2016 she played the role of Natasha Rostova in the War & Peace series.

The actress also became the part of Pride and Prejudice parody Pride and Prejudice and Zombies. In 2017 she acted in many big films. She acted in Darkest Hour, Baby Driver, The Exception, Mamma Mia! Here We Go Again, The Guernsey Literary and Potato Peel Pie Society. In 2018 she is set to star in the adaptation of Rebecca a gothic romance.

Lily James took up her father’s first name as her second name because there was already an actress in the industry with the name Lily Thompson. She also wanted to honour her father. At first, she was in a relationship with Matt Smith a well-known actor. But they broke up in 2019. Then in the coronavirus lockdown, James got spotted in an outing with Chris Evans. Many reports are saying that they are dating. But there is no news from the actress.

The net worth of Lily James

The net worth estimate of Lily James is $4 million. As she has acted in many blockbuster films she is a rich actress. The actress does the character roles well. She is more interested to act in historical romances. Now she is going to be part of an amazing film. In the future her net worth value may get higher.

Lili James is a wonderful actress. She is passionate and hardworking. More than popularity, she likes to act and perform. She is going to act in many great films in the future.