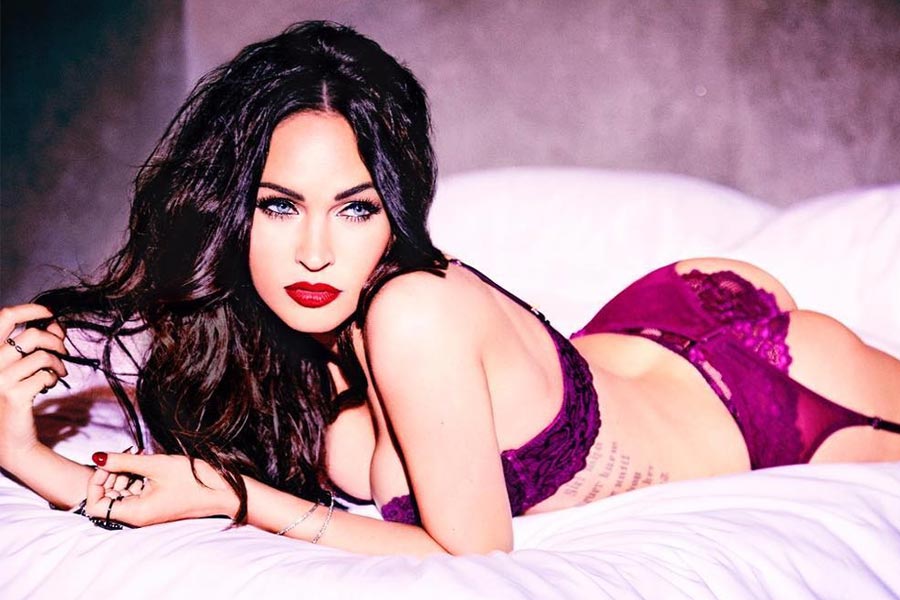 Megan Fox is an American model and actress. She started her career in the year 2001 with small roles in television and movies. She then debuted in movie Confessions of a Teenage Drama Queen. The actress is well known for her glamorous roles in the films. She appeared in many magazines such as Rolling Stone, FHM, and Maxim. To know more about the early life, personal life, career and net worth of Megan Fox have a look at the following information below.

Megan Fox was born in Oak Ridge, Tennessee in 1986. The name of her mother is Gloria Darlene and the name of her father is Franklin Thomas Fox. She grew up in Rockwood. Fox’s father worked as a parole officer. But he and his wife divorced when Fox was three years old. Fox’s mother later raised her and her sister. She got married to Tony Tonachio who became Fox’s stepfather. The family was a strict Pentecost believer but Fox after some years attended the Catholic school. While she was living with her parents she did was not allowed to have a boyfriend. She lived with her mother until she found work.

She began training for dance and drama at age five. Megan went dancing at the community centre in Kingston, Tennessee, and was part of Elementary School’s chorus. When she was ten years old she moved to St. Petersburg, Florida, and continued with all the training. Then she began her modelling training at age thirteen. She won several awards in American Modelling and Talent Convention situated at Hilton Head, South Carolina. At age seventeen she came to Los Angeles, California to move up in the career.

In an interview, Megan talked freely about her school life. She was a victim of constant bullying. The actress avoided eating lunch with others because she was always afraid of attacks with lunch packets. She shared that the issue was not with her appearance and she always got along with boys more than girls. As she was aggressive many girls do not like her personality. She had only one girlfriend all her life. The actress also shared that she was never interested in studies and thought that it was irrelevant.

When she was fifteen she acted in her first film Holiday in the Sun released in 2001. She played the character of a spoilt heiress Brianna Wallace who is a rival to character Alex Stewart. She also appeared as a guest actor in the movie What I like about You and Two and a Half Men. In 2004 Megan Fox acted in movie Confessions of a Teenage Drama Queen alongside Lindsay Lohan. She also got a regular role in a Television Series Hope & Faith.

Then the actress became a part of the popular movie Transformers. She played as the love interest of character Sam Witwicky. This was one of her breakthrough performances and she got nominated for three Teen Choice Awards for this role. She then became a part of two more sequels in the Transformers franchise. The director of the film Michael Bay ordered the actress to gain 10 pounds for the role that sparked lots of controversies.

For the third installment of movie Transformers: Dark of the Moon, Fox was not requested to act because of her hateful comments about the director. She compared his manner to that of Hitler and got fired from the job by Steven Spielberg. Fox then played the lead role in a horror film Jennifer’s Body. In 2009 she acted in the movie Jonah Hex. She played a gun-wielding pretty woman and paired opposite Josh Brolin. This film was the worst picture of the year because of its poor performance in the box office.

Megan Fox played the female lead in Passion Play with Mickey Rourke. This film also received a poor reception from critics and the audience. Then Fox voiced one of the dolphins in a documentary movie Naya Legend of the Golden Dolphins. Furthermore, Fox appeared in a video single of Eminem and Rihanna called “Love the Way You Lie” with Dominic Monaghan.

In 2012, the actress for a short time appeared in Sacha Baron Cohen’s comedy called The Dictator. Then she was also part of another comedy This Is 40. She voiced Lois Lane in Robot Chicken DC Comics Special.

In 2013 the Megan Fox promoted the Brahma beer for a Brazilian commercial. In 2013 Fox reconciled with the director Michael Bay and worked with him in Teenage Mutant Ninja Turtles reboot. Moreover, she was the female lead of the movie Zeroville. In 2016 Ninja Turtles: Out of the Shadows the sequel to the first movie, Fox again played the role of April O’Neil.

In 2018 Fox starred in a Korean Film as an American news reporter. The name of the film is The Battle of Jangsari. In May 2019 there was an announcement regarding the release of drama Big Gold Brick. Fox is going to play a supporting role in this upcoming drama.

Fox met actor Brian Austin Green in the sets of Hope and Faith and started to date him even though he was thirty and she was eighteen. The age difference did not matter to her because she tried to prove to him that although she is eighteen she can be responsible. They got engaged in 2006 but ended it again in 2009. But after several ups and downs in their relationship, they finally tied the knot in June 2010 at Four Seasons hotel situated in Hawaii. They have three sons.

Megan Fox is now thirty-four years of age. She is a beautiful woman with an amazing body. Her hair is black and her eyes are sparkly. Her height is 1.63 m and her weight is 52 Kg.

The Net Worth of Megan Fox

The net worth estimate of the beautiful actress Megan Fox is $8 Million dollars. She was a part of many large budget films such as Transformers so that is why her net worth is huge. She is a great model also and appears in many magazines. The model and actress are also popular on Instagram, Twitter, and Facebook. Her dressing sense is appealing to all the spectators.

Megan Fox’s career shows us that through hard work and determination we can do anything. Even though many of her films were not successful she never let her confidence dwindle.