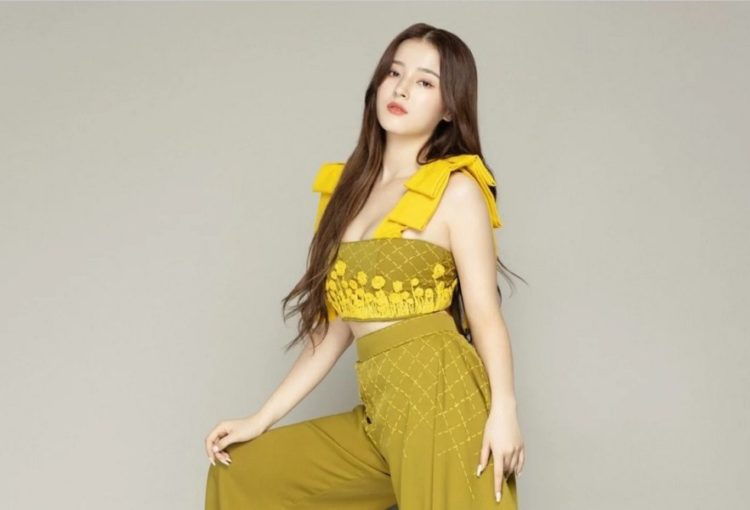 Korean singers are all the rage. They are taking over the world by their charming style and attitude. Here you can find the details of the popular South Korean singer Nancy Momoland. Also, she is a well-known model and TikTok star. She is from South Korea and her age is 21. Her real name is Nancy Jewel Mcdonie. But she is known by her name Nancy Momoland. She is part of the band Momoland. Further, she is a lead singer in it. In Tiktok her funny videos, lip sync videos, and romantic videos are popular. Here you can find all the details about this beautiful singer.

Nancy Momoland finished her schooling in Hanlim Multi Arts High school in Daegu, South Korea. Then she graduated from college in South Korea. Also, she became a student in the musical department. After that, she tried her luck at modeling.

Momoland has a Korean mother named Lee Myeong-Ju and an American father named Richard Jowel McDonie. She has an elder sister and her name is Brenda Lee McDonie.

In 2011 Nancy Momoland became part of a hip hop group called “Cutie Pie”. Then she joined the auditions for ‘Korea’s Got Talent. Her group was able to reach the semi-finals.  Then she showed her talents in many television series. She appeared in The Unlimited. In 2012 she took part in the Mar Ee Rae Show: Just Do It Expedition. Then in 2016, she became a contestant in Finding Momoland. She came in second place and became a part of the Momoland group.

She released a single called Wonderful Love in 2017. Through this, she became a famous star in South Korea. As a model, she has worked on lots of music videos. Then she posted some of her videos on TikTok that helped her to get lots of followers.

In 2019 there was news of Momoland getting roped to act in a miniseries titled The Soulmate Project. She is going to portray a Korean-American girl living in the Philippines. The production for the drama was planned to begin in 2020. But because of the Covid 19 pandemic, the project is put on hold.

Nancy Momoland is now living in the United States. In an interview, she shared about her childhood in South Korea. But she grew up in Ohio, USA. She is a girl from mixed heritage. When asked if she was unaware of the South Korean culture, she shared that her mother told her that Korean and American schools are different. When she studied in Korea for some time she did not know Korean. But her friends helped her to learn it.

As Nancy is a part of the group Momoland, the members of the group are her close friends. Also, one time she reunited with her Filipina friend Charlie Dizon. She is a member of the talent management of ABS-CBN films. One day Momoland and Dizon surprised their fans by chatting live. They both are best friends and Nancy spent lots of time with Charlie in the Philippines. Also if they get any free time they always catch up.

Nancy Momoland is single now. Many of her fans want to know if she has a boyfriend or not but she has never revealed it. Sometimes her name gets linked with other South Korean stars but it is all gossip. She has never really publicly shared about her dating life. So she wants to keep her relationships private from the media.

What is the Net Worth of Nancy Momoland

In 2020 Nancy got chosen as an endorsement model for skincare brand “Some By Mi”. The representatives of the brand shared that they chose Nancy because she has healthy and pure skin.

Nancy Momoland is a great singer. She is world-famous because of her talents. Also, she is an adorable girl.

You may also like: Cool Biographical Details of Payton Moormeier

Meet Simone Giertz, The Inventor Of The Tesla Truck