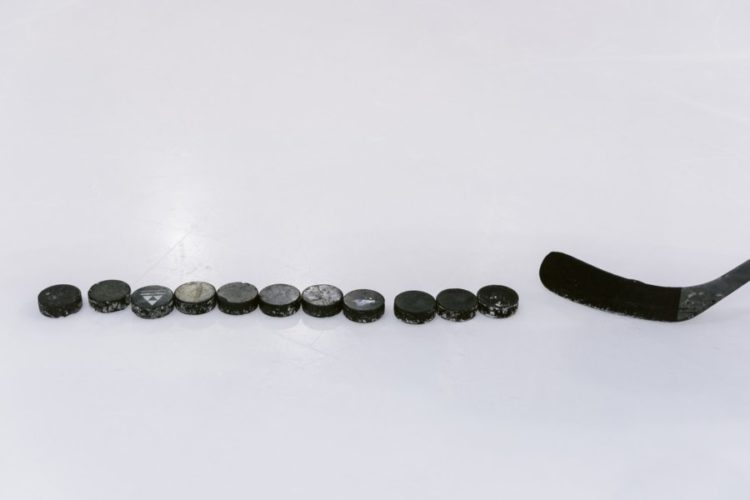 Every hockey player wishes they could skate twelve months a year, but getting the ice time is difficult and expensive. Even in regions with ice rinks open all year round, you’d be bankrupt soon if you had to pay every time you wanted to work on your skills. Practicing a wrist shot with a tennis ball on pavement may be fun. But it won’t directly translate when you go to shoot a puck on ice. Let’s check out some of the equipment that lets hockey players keep practicing their skills.

If you practice picking the same top corner over and over, sure, you get better. But you may get bored soon, and game conditions never require you to shoot in the same place twice, never mind endlessly.

Today, industry leaders like HockeyShot have interactive drills that keep shooters alert, just like they’d have to be in a real game. Light-up indicators that are mounted in the net change sequences, so shooters don’t know where they’re going to aim until they’re ready to release the puck.

Such targets force you to keep your head up. The lights can be programmed to change randomly and at different speeds, changing up drills and making them easier or harder.

Snipers need a shooting pad that lets the puck glide the way it would on ice, simulating game conditions more faithfully without chewing up expensive hockey sticks. Stick weights and weighted pucks make training difficult and more effective. Once you can shoot pucks hard with the added weight, see what happens when you take it off!

Make your shot powerful and accurate by using the right equipment when practicing.

Players maintain puck possession by keeping it on their stick. Whether you’re buying time cycling down low in the offensive zone or trying to skate the puck out of your zone, the team counts on you to maintain possession. Today’s stickhandling training tools can be interactive. The best ones have various colored dots on shooting pads, while anindicator lights up different colors, guiding players where to stickhandle.

If you want to go old school and train using non-interactive equipment, Edge Danglers are perfect. Made of high-grade steel and a durable and robust polyethylene base, you’ll weave pucks in and out of these tools for years without damaging the equipment.

Keep your head up with the puck and keep changing the drills. The exercises need to replicate game conditions, so you’ll want to stickhandle with soft hands, evading opponents however they come at you. As every player surely knows, you’re liable to get bodychecked to the ice if your head is down staring at your feet.

Practice makes perfect in hockey, like in so many things. If you can’t access ice to keep repeating these hockey skills, get the equipment that simulates game conditions. You can fantasize about scoring the Stanley Cup-winning overtime goal in your driveway, but it’s better if you have the practice tools to make you an elite player.

You may also like: 5 Tennis Drills the Pros Use to Make You a Better Tennis Player