Protein Production Utilizing Recombinant Technologies: What You Need to Know? 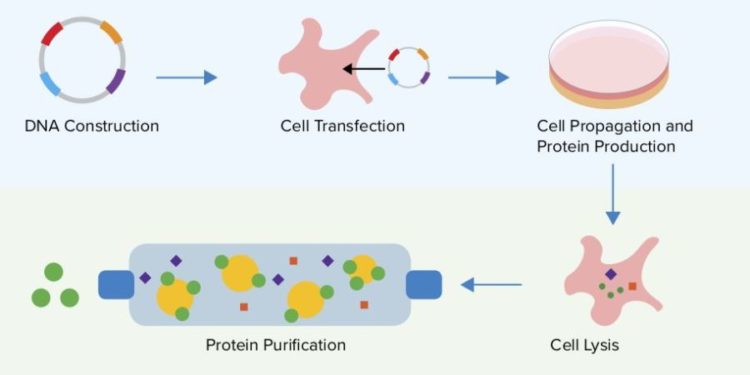 Because of their important properties, proteins are usually utilized for nutritional, medical, and industrial applications. A key way to produce a large amount of a specific protein is called the recombinant DNA technology.

This involves using genetic recombination to bring genetic materials from several sources to create DNA sequences that are normally not found in the genome. And, proteins that are produced through the recombinant DNA technology are popularly called recombinant proteins. This post discusses protein production utilizing recombinant technologies: What you need to know.

Proteins can manage various biochemical reactions, offer structures to organisms, and many more. Besides this, proteins can also transport important molecules and even use antibodies to defend the organisms.

Depending on molecular biology’s central dogma, the blueprints for proteins are kept in DNA. You also need messenger RNA which is an intermediary template to transfer from the DNA the genetic information to the protein through the transcriptional and translational processes.

The first step involves protein expression that targets a large amount of proteins. This gene-to-protein process has two key steps called transcription and translation. It is usually achieved by manipulating gene expression in a particular organism so that it expresses a large amount of a recombinant gene. To get adequate amounts of the protein you desire, then codon optimization, strain selection, fusion systems, and many more techniques are used.

Protein purification tends to focus on chromatographic purification of protein when it comes to research scale. Before you can identify and study properties of a specific protein, you need to separate and purify the protein. This uses several processes that intend to isolate a single or a couple of proteins from complex mixtures.

Protein yield may also be optimized by choosing the proper lysis reagents as well as the right purification resin. You can express many recombinant proteins as fusion proteins and have short affinity tags like glutathione S-transferase or polyhistidine, that allows selective purification of the desired protein.

There are many firms out there that offer purified protein and gene services. That said, it’s worth noting that protein production refers to the biotechnological process you can use to produce a specific protein. Some of the commonly used production systems are insect cells, bacteria, yeast, mammalian cells, and many more.

Protein purification simply means protein fractionation and it’s also known as downstream processing. You must remember that there are several processes associated with protein purification like pumping and ultrafiltration. Further, protein tags are a crucial and convenient way for streamlining protein purification, improving solubility of a recombinant protein, and allowing you to have a simple way to keep track of a protein during protein expression and purification.

For applications that need protein purification involving fairly small and high amounts of protein, you can choose chromatography to selectively purify the desired protein.

There are several basic steps required to produce a recombinant protein. These include amplification of the gene, inserting into cloning vector, sub-cloning into expression vector, transforming into protein expressing system, testing to identify recombinant protein, large-scale production, isolation, and purification.

It’s also worth noting that there are many factors you need to consider. You need to figure out the ideal host system to select and the best way to isolate and purify a recombinant protein.

However, it can be hard to choose the right expression system or to utilize the proper purification method, especially when you have to consider the characteristics of the desired recombinant protein. Some of the things you need to consider include solubility, membrane bound, single or multi domain, size, and where to express it.

For example, biological companies can help you when it comes to transcription and translation.

Transcription happens in three steps in eukaryotes and prokaryotes, which are initiation, elongation, and termination. Keep in mind that transcription starts when you unwind the double-stranded DNA so that there can be binding of RNA polymerase.

When you initiate transcription, DNA releases RNA polymerase. Activators, repressors, and chromatin structures in eukaryotes can regulate transcription at various levels. In prokaryotes, there is no need for any special modification of messenger RNA and translation of the message begins before the transcription is done.

Protein synthesis or translation refers to a multi-step process that needs macromolecules, such as ribosomes, protein factors, transfer RNAs, small molecules like ATP and amino acids. Remember that there are particular protein factors required for each step of translation. The entire process is quite similar in both eukaryotes and prokaryotes, though there are some differences.

Protein factors and sequences in messenger RNA are usually involved when it comes to recognizing the initiation codon as well as the creation of the initiation complex. In elongation step, tRNAs can bind to the designed amino acids, the process called tRNA charging and move them to the ribosome to be polymerized and form a peptide.

After translation, polypeptides can be modified in several ways to finish their structure. Also, they can designate their place or regulate their activities in the cell. A post-translational modification refers to the multiple additions or changes to the chemical structure and are important features of the entire cell biology.

Forms of post-translational modifications can include polypeptide folding into globular proteins with the assistance of chaperone proteins to get to the low energy state and modifications of the present amino acids. Others are disulfide bridge reduction or formation, Protein production modifications that help binding functions, and addition of functional groups to regulate protein activity.

The uses of recombinant proteins

Recently, RP microarrays used for checking protein to protein interactions are becoming quite popular. With this approach, many researchers usually seed a slide with many immobilized proteins. They then treat with various molecules to check how the two agents are interacting with each other. Using this system, researchers have studied how proteins interact with other peptides or proteins, small molecules, enzymes, nucleic acids, and lipids. This allows high throughput when you are studying protein to protein interactions.

Some of the common therapeutic proteins are antibodies, hormones, enzymes, interleukins, and anticoagulants. But human proteins that are obtained via genetic engineering can play a crucial role when it comes to the therapeutic medicines market. For example, one of the RP vaccines that was approved by the FDA is called the Hepatitis B vaccine designed to prevent infection that is caused by subtypes of the Hepatitis B virus.

Recombinant human insulin was first utilized in treatment in 1982. There has now been a significant growth of the recombinant protein production industry. Today, there are many recombinant proteins that the United States FDA has approved but just for clinical use.

But there are more recombinant proteins that are generated and utilized in medicine worldwide. Also, recombinant human insulin was an early example of how biotechnology can be used in drug development. Recombinant proteins are mostly good medicines that you can use safely, and they tend to take a shorter period to generate.

Recombinant proteins can also be used in agriculture, food production, and bioengineering. For instance, in the breeding industry, you can add enzymes to animal feed to improve the nutritional value, reduce feed costs, and enhance animal performance. Above all, lactic acid bacteria have been utilized for years to produce fermented foods.

You may also read: How Supplements Can Make You Stronger and More Fit