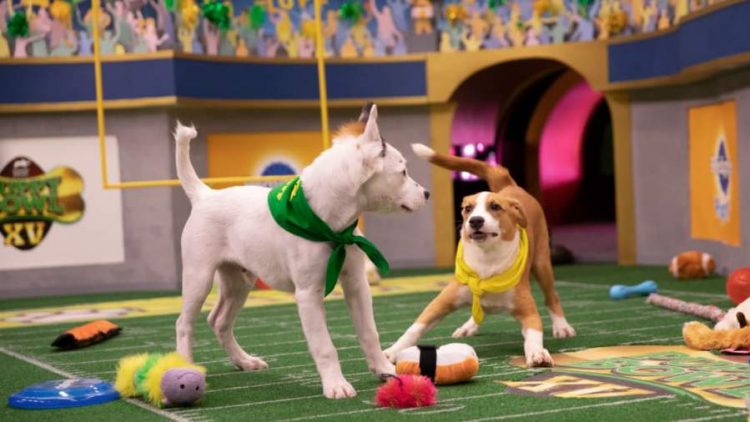 All the dog lovers are happily anticipating the Puppy Bowl 2021 which is going to happen soon. The adorable and active puppies are ready to showcase their excellent skills. The winning puppy team will receive a trophy at the end. Each of the competitors in the matches is a rescue dog so they may get a forever home through the event. The Puppy Bowl 2021 will start at 2 p.m. EST and will air on Animal Planet and Discovery+. The correspondents like Sheena Inu, Rodt Weiler, and James Hound, are going to return this year.

Moreover, the on-field reporters Herman Shepherd and Brittany spaniel will also be part of the event. The dogs will get the support of Steve Levy the ESPN Monday Night Football announcer and Sage Steele. Dan Schachner will return as the referee and he is doing the job for over ten years.

Some of the celebrity guests will be part of the event like Kristen Bell, Duff Goldman and Valerie Bertinelli. Some special program will get conducted by the feline dance party members. Therefore, this program will also be very entertaining. Some of the adoptable kittens from the party will also get showcased.

The competition between Team Ruff and Team Fluff

It is pretty tough to choose between the teams because all the pups are cute. However, the most talented team will win in the end. You can identify the team members by the colour of the stylish scarves they will be wearing. The pictures of the seventy competitors with their respective scarves will get displayed for the viewers. The stories of the dogs will also get revealed during the event.

Who are the hosts of the show?

According to the sources, Martha Stewart and Snoop Dogg are going to co-host the Puppy Bowl 2021. The duo will also host the ultimate tailgate party that will happen before the three hours event. They are going to root for all the pups in action from the shelters like Annenberg Pet Space, Paw Works, and SPCA LA.

Martha Stewart is a lifestyle mogul who at seventy-nine is a famous personality and she is going to join Rapper Snoop Dog, forty-nine, to represent the teams. Stewart will support the Team Ruff and she will wear an orange jersey to signify it. Then Snoop will be wearing a blue jersey to support Team Fluff.

Stewart’s French Bulldogs like Crème Brûlée and Bête Noire and Chow Chows Empress Qin and Emperor Han will join her to support the team. Moreover, Snoop’s French Bulldogs Juelz Broadus and Chalk will vouch for Team Fluff. The three-hour special program will contain seventy adoptable dogs from the shelters of northeast U.S. and they will take part in the competition to get the prestigious “Lombarky” trophy.

The wisdom panel will give us the details of the puppies DNA so we will learn how their breed will give them the advantage for each challenge. The event will happen in the brand new GEICO Stadium. The players will have a large area to exhibit their skills. For the first time ever, there are going to be cheerleading pups to cheer up the puppy players.

The Puppy Bowl 2021 is going to a happy show because the seventy puppies are ready to take over the audience with their cuteness and talent.

Also read: Doga: Why is it the Best Fitness Activity to Keep You and Your Dog in Shape?