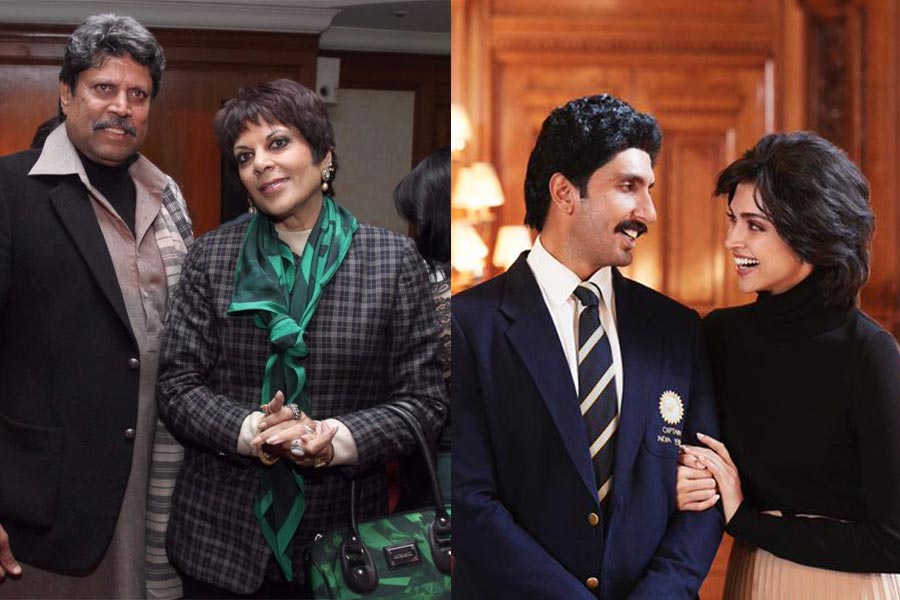 The power couple of Bollywood, Ranveer Singh and Deepika Padukone are preparing themselves for their upcoming film 1983. Ranvir Singh has grabbed the best actor award for his most famous movie “Gully Boy” and Deepika for her latest movie “Chhapaak”. Most of the cine-goers and cricket fans have been long waiting for this movie. In this movie, Deepika Padukone is featured as Kapil Dev’s wife, Romi Dev and Ranvir Singh as ‘Kapil Dev‘. The makers of the film have tried really very hard to make them resemble with Kapil Dev and Romi Bhatia. If you will have a look at them, you will not be able to recognize them and differentiate with the real Kapil Dev and Romi Bhatia.

Ranvir Singh could be seen dressed in the formal outfit white shirt paired with a tie and the official Indian captain blazer while Deepika is seen clad in a black turtle neck tee paired with a beige coloured skirt. They both are seriously winning the heart of everyone.

Fans started pouring their likes, hearts and fire emojis after the photo was shared on the social media. One of the fans posted on their picture, “Super looks”.

Another user wrote, “U can carry all the looks so elegantly!!”

The duo is very excited about their upcoming movie

Ranvir and Deepika are quite excited about their upcoming movie. The film hs been directed by Kabir Khan and is slated to release on April 10, 2020.

About her role, Deepika said, “To be able to play a small part in a film that captures one of the most iconic moments in sporting history has been an absolute honour. I have seen very closely the role a wife plays in the success of her husband’s professional and personal aspirations in my mother and 83 for me in many ways is an ode to every woman who puts her husband’s dream before her own.”

We wish them all the very best for their upcoming movie which we can’t wait to watch.