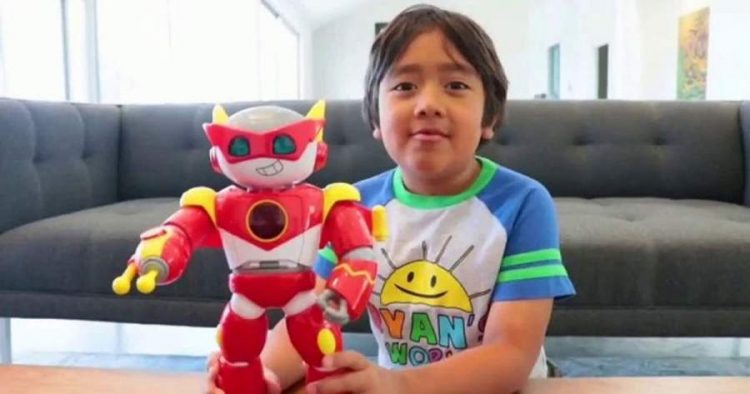 Ryan Kaji is a popular YouTuber who appears in his channel Ryan’s World. Ryan Kaji is 9 years old. He comes in his YouTube channel with his family. Ryan Kaji’s YouTube channel releases videos every day for entertaining the fans. One of his videos Huge Eggs Surprise Toys Challenge has received more than 2.0 billion views. As of 2020, his channel has 27 million subscribers. It is one of the top 100 most-watched channels in the US. He is one of the youngest highest paid YouTuber in the world.

Know all the details about the amazing Ryan Kaji here.

Ryan’s family changed their real name Guan to Kaji to serve as an onscreen name. They are from Texas, United States. His mother was a chemistry teacher. She left her job to create a YouTube channel full time with her son. The YouTube career started when Ryan was watching the YouTube videos were children of his age served as the main stars.

He asked his mother why he is not on YouTube when all the other children are there. So they decided to go live on YouTube. Ryan Kaji parents are Shion Kaji and Loann Kaji. Then he has two sisters who are Emma and Kate.

Ryan’s Youtube channel started in 2015. On 2017 the parents signed a contract with PocketWatch which is a startup children’s media company founded in 2016. This company does marketing and merchandise for Ryan’s Youtube videos. On 2018 the Youtube channel by Ryan Kaji called Ryan ToysReview joined with PocketWatch and WildWorks to create an app called Tag with Ryan. This was an endless running game that targeted children. It is available in both Android and Ios.

On 2019 they also created a television series with twenty episodes for the pre-schoolers with the title Ryan’s Mystery Playdate. In the same year, Outright Games unveiled the video game titled Race with Ryan. It was a racing game that released in many consoles like PlayStation 4, Xbox One, Microsoft Windows and Nintendo Switch.

The channel stated that they will release a live-action animated series Super Spy Ryan in the Amazon Kids+ on November 27, 2020. Recently, they released information that they are going to release a new game on gaming platform Roblox.

How has Ryan influenced the toy’s sales?

The toy reviews of Ryan in his channels have influenced the toy brands sales in the past years. The videos that get millions of views will increase the sales of the toys also. The founder of PocketWatch Chris Williams compared Kaji to the character SpongeBob in SpongeBob SquarePants. The description in the channel states that the toys shown in the video are later given to charities. Ryan’s mother shared that Ryan does not keep all the toys he gets as he shares it with the family and friends. The family is now managing nine channels on Youtube.

The net worth of Ryan Kaji

Many people are wondering about how does Ryan Kaji earn money? He gets $30 for unboxing the toys on YouTube and reviewing it. Moreover, his likes and dislikes determine the sales of toys in the market. He has made $29.5 million (as per The Guardian) for his Ryan’s World and then he got $200 million from the branded toys on the channel. Then, he signed a multi million-dollar deal with Nickelodeon for a TV series.

Amidst many controversies on his videos because of advertising unhealthy food, he is still making a lot of money. He has become a brand because businesses like Walmart are using his name to sell his products.

Ryan Kaji is a great child influencer on YouTube. He and his family have many plans to entertain and influence the vast majority of the audience they have gathered over the years.