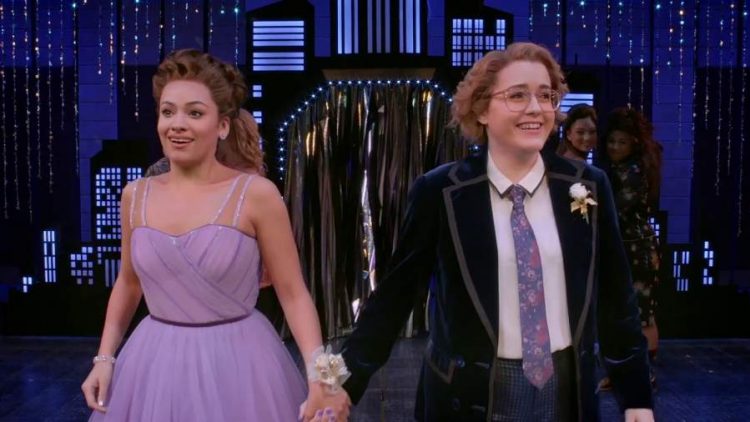 The Prom is a new upcoming Netflix musical film made by Ryan Murphy. It got adapted into the screen by Chad Beguelin and Bob Martin from the Broadway musical of 2016. Many popular actors are going to act in this musical film. This is one of the projects that belong to Eddie Murphy’s five-year contract with Netflix. It is his third film as a director. So it is one of the highly expected films of the year. Know more about the details here.

The Prom is set to release on December 11, 2020, by Netflix. It is one of the best releases of the year as many are waiting for the film after its excellent poster. It consisted of the neon-lit marquee in a board lighting the cast member names. It was both minimalist yet impressive. The bottom of the board reveals the date of release of the film and the Netflix logo. Therefore, stay tuned for the release this year.

The plotline of The Prom

It tells the story of a girl named Emma Nolan who is studying in high-school. She has a girlfriend and wants to take her to the Prom in her school however gets banned by the school’s conservative notions. Then she gets help from unknown quarters. She meets with a colourful theatre group who come from New York City to Indiana to help her.

The theatre group consists of members like two times Tony Award winner Dee Dee Allen and her colleague Barry Glickman. They plan to create a musical on First Lady Eleanor Roosevelt however it fails. Because of it, their career ends in disaster. They decide to find a cause to safeguard their reputation. A chorus girl Angie Dickinson joins their cause. That is why the Broadway group travels to Indiana to help Emma Nolan and her girlfriend Alyssa as they feel that they are going through the same situation as them.

A lesbian girl who is unhappy because she is not able to go to the prom with her girlfriend as the people in her hometown are conventional.

She is an excellent musical actress who loses her career because of getting bad reviews for her musical production.

He is the partner of Dee Dee who assists her in making a production that gets bad reviews.

She is a woman who worked in Broadway theatre as a chorus girl. She joins Dee Dee and travels to Indiana.

She is the girlfriend of Emma who gets banned by society from going to prom. She is a popular cheerleader of the school.

He is the principal of the school where Emma and Alyssa are studying in.

He is a publicist.

The Prom musical is going to be a great hit.  It talks about the pressures experienced by people when they feel left out and what they do when their ideas get rejected by the people around them. Get ready to watch the film as it talks about important things in life.