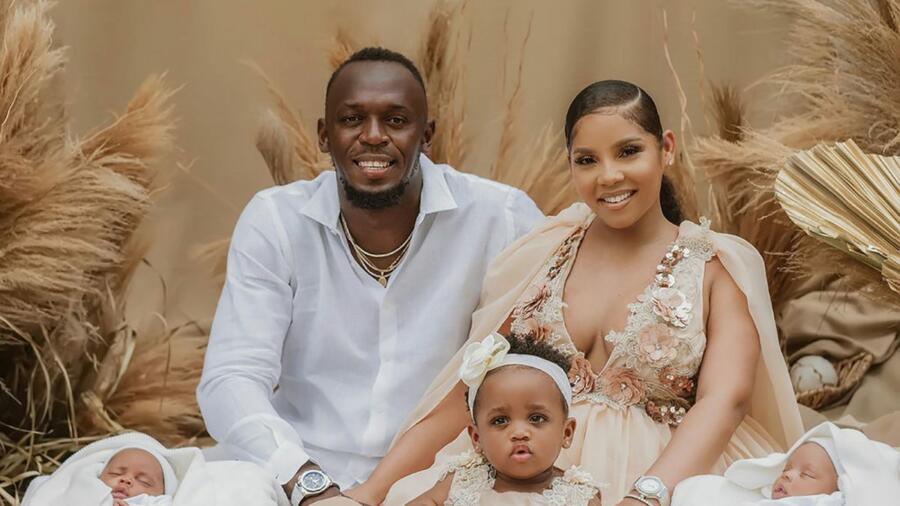 If you are a fan of sports personalities, you must have heard about the world-famous sportsman athlete Usain Bolt. Needless to say, he is a legendary personality who has already set numerous records in his sports career. However, today, we will shift our discussion from the legendary sportsman’s life to the lives of his twin sons, Saint Leo Bolt, and Thunder Bolt.

Pretty recently, the legendary sprinter Usain Bolt and his Kasi Bennett welcomed their twin sons. In fact, they also fitting names. In fact, Bolt announced on Father’s Day that his daughter Olympia Lightning is now an older sister. Moreover, he also shared an adorable photo of the family of five with the lightning bolt emoji next to each of his children’s names. However, the Jamaican sprinting sports icon did not specify when the twins were born.

Who Is Usain Bolt?

There are very few people who are not aware of who this personality is. Even if you do not watch sports, you must have indeed heard about this Jamaican athlete. As per the sources, Bolt was born on 21st August 1986 in Jamaica. Therefore, he is presently 36 years old.

Needless to say, he is widely considered the greatest sprinter of all time. In fact, he also holds the world record in the 100 meters, 200 meters, and 4×100 meters relay. At the same time, he is also an eight-time Olympic gold medalist.

He is the only sprinter to win Olympic 100 m and 200 m titles at three consecutive Olympics. However, he gained worldwide fame for his double sprint victory in world record times at the 2008 Beijing Olympics. This also made him the first person to hold both records. Moreover, he is an eleven-time World Champion.

Who Is Usain Bolt’s Girlfriend?

Many of you probably know that Usain Bolt has been in a relationship with Kasi Bennet for a long time. In fact, they also have a daughter, Olympia, and recently they welcomed their twin boys, Saint Leo Bolt and Thunder Bolt.

The couple has been dating since 2014. However, they have not revealed how they met each other since they have kept their relationship a secret from the world for a long time. So in an interview with The Telegraph in 2016, Usain Bolt revealed about Bennet for the first time. Later on, they also confirmed their relationship on Instagram.

Now let us share with you who Kasi Bennett is. As per the sources, she is a resident of Jamaica and has also showcased her best skills throughout her career. In fact, she is a popular model who often shares pictures from her gorgeous photoshoots on Instagram. She has around 388,000 followers on her Insta profile.

In addition, Bennett has a degree in law, which is also mentioned in her bio. She holds a Master’s Degree in Business Management (MBM). So we can say that she has a successful career in marketing. As per the sources, she is also the Managing Director of Elevate Marketing House Ltd. In fact, she is also involved with several charity organizations.

When Did The Couple Welcome Their Eldest Daughter?

As per the sources, the legendary Jamaican athlete, Usain Bolt, and his girlfriend welcomed their first daughter, Olympia Lightning Bolt in May 2020. Bolt retired from the sport in 2017. In fact, this year will be the first Olympics since 2000 in which the sprinter won’t take part.

The couple announced the birth of their daughter, Olympia, last year with a series of adorable pictures. “We have started a new chapter together with our daughter Olympia Lightning Bolt. I look forward to what the future will bring for us but be reassured that I will be the ROCK for this family,” said Bolt at the time. Currently, their eldest daughter is 2 years old.

When Did Usain Bolt & Kasi Bennett Announce The News Of The Birth Of Their Twin Sons?

Many of our readers are probably hearing the news for the first time that Usain Bolt and Kasi Bennett have recently welcomed their twin boys recently. It was on Father’s day that the Jamaican athlete shared a post on his Insta account regarding the birth of his twin sons, Saint Leo Bolt and Thunder Bolt.

The posts show a family photo with Bolt sitting next to his partner Kasi Bennett, their eldest daughter Olympia Lightning and their newborn twins. In fact, just like their sister, the boys have been given equally fitting names —- Thunder and Saint Leo Bolt. However, the couple did not share any details regarding when they were born. However, we can assume that they were born pretty recently.

Needless to say, the names of the twin boys are absolutely fitting. All three of Usain Bolt’s children have appropriate names like their father. As of now, we are not sure what the future holds for them, but we can assume that they might choose the same profession as their father. Even though they are infants and are still not much aware of their parent’s celebrity status, they have already stolen the spotlight with their adorable pictures.

If you follow Bolt or his partner Kasi Bennett’s page on social media platforms, you will see cute pictures of their kids. In fact, you can also see videos of the kids which their parents often upload. So you can follow their profiles on social media to see all their recent pictures.

So as we conclude, we can say that Usain Bolt is such a name that has not made his entire country proud but also has taken it to a much-elevated platform all over the world. Even though he has recently retired, people are always curious to find out about his personal life. Pretty recently, he and his partner Kasi Bennett welcomed their twin sons, Saint Leo Bolt and Thunder Bolt. We hope all three of their children remain happy along with their celebrity parents.

Also read: Plunge Into the Truth Behind The Conjuring’s Bathsheba Sherman