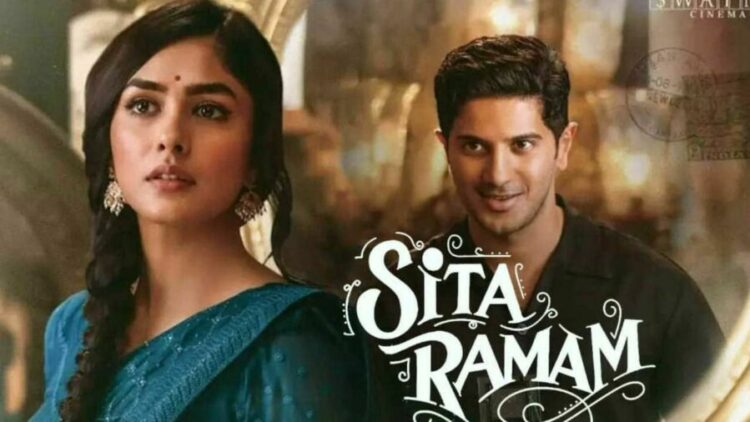 Written and directed by Hanu Raghavapudi, Sita Ramam is a Telugu romantic drama movie made by Vyjayanthi Movies and Swapna Cinema. Since the filmmakers released the first look, Sita Ramam movie has generated buzz. After the trailer was released, interest in the movie increased significantly.

Everyone is appreciating the period drama and its leads, Dulquer Salmaan and Mrunal Thakur, now that the movie has finally been released.

Info on the Sita Ramam movie

Afreen (Rashmika Mandanna) is a rigid Pakistani agitator who was a student in London in 1985. She has a strong distaste for anything and everything that is Indian. Despite coming from the other side of the border, she still reflects the feelings of children on this side of the border today. She is told early on in the movie that she uses love as a remedy for her unjustified anger, but she dismisses this advice as the sayings of an older man.

However, she is sent back to 1964 when she reluctantly decides to deliver a lost letter to India, where the poetic love story of Lt. Ram (Dulquer Salmaan) and Sita (Mrunal Thakur) plays out. She is a woman with a secret she can’t reveal, while he is an orphan. Afreen may end up picking up some lessons along the way even as she and her reluctant partner in crime, Balaji (Tharun Bhascker), learn everything there is to know about Sita and Ram.

Sita Ramam movie appears to be nothing more than a love story about two people from very different worlds who fall in love while exchanging letters. However, if you look past the luxury, vintage glamour, stunning attire, VFX butterflies, and lavish sets, you’ll discover a tale with its heart rooted in love and humanity. Hanu does an excellent job of demonstrating rather than lecturing how no matter what god you pray to or what nation you belong to, all that matters is humanity.

Ram and Major Tariq (Sachin Khedekar), though not everyone in the armies on either side of the border believes this, unintentionally start a chain reaction with their empathy that not only touches many lives but also makes them better off. Beyond that, Ram and Sita have a love story that encourages you to support them.

The movie is not without faults, though, as there may be logical inconsistencies that nag you after you’ve enjoyed it all for a while. Not to mention, Sita Ramam doesn’t get going until a specific sequence results in Ram receiving a deluge of letters from people all over the nation who moved enough to reach out to a stranger. You also gain knowledge about Ram and Sita as Afreen does.

In contrast, if you pay close enough attention, you can predict everything that happens along the way, including Sita, Vishnu (Sumanth), a fellow soldier who always seemed envious of Ram, and even Afreen. However, how the story develops assumes that you couldn’t have predicted anything about these characters. Although it is admirable that Hanu tries to tie up all the loose ends and give Afreen, Balaji, and us adequate explanations, it also means that some questions remain unanswered.

Undoubtedly Dulquer and Mrunal take the spotlight in Sita Ramam movie. It would also help if you emotionally invested in the characters’ stories for a movie like this to succeed. The actors also did an excellent job of achieving that. They give their characters life, and it helps that Mrunal looks stunning in the movie. While Vennela Kishore and Murli Sharma are hilarious, Rashmika, Tharun, Sachin, and Sumanth perform adequately.

Many talented actors, including Priyadarshi, Rahul Ravindran, Tinu Anand, and Gautam Vasudev Menon, also make brief appearances in the movie. Vishal Chandrasekhar’s score, PS Vinod’s cinematography, and Shreyaas Krishna’s photography all significantly contribute to bringing Sita Ramam’s world to life. But a special thanks must go to costume designer Sheetal Sharma and art director Irfan Rashid Sheikh for bringing the audience so convincingly back to the 1960s and 1980s.

Shortly Hanu successfully tells a moving story and creates a beautiful and appealing film with Sita Ramam. If you’re looking for a break from all the mass masala, you should surely watch this one. On Ibomma, you can watch and download Sita Raman movie.

Fans also showered the lead actors with love on the film’s release day. Therefore Sita Ramam movie quickly rose to the top of social media trends. Simultaneous releases of Sita Ramam in Telugu, Tamil, and Malayalam have also been made. Vishal Chandrasekhar composed the soundtrack for the film. It was produced by Ashwini Dutt under the Swapna Cinema banner and was presented by Vyjayanthi Movies.