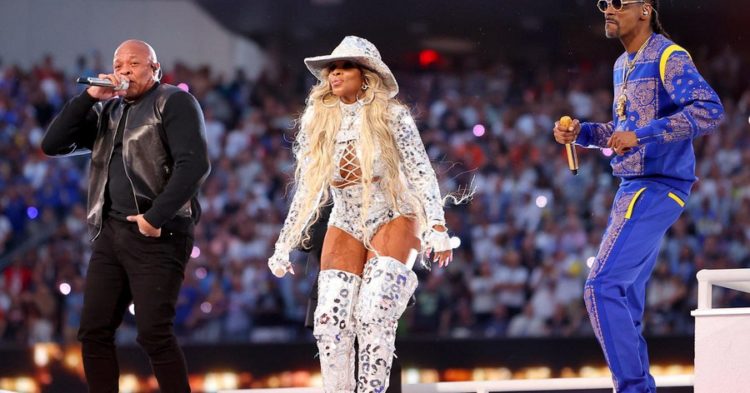 Are you eager to know what happened in the Super Bowl? The Super Bowl half-time show was a big success this year. It was a grand event produced by Dr. Dre. It featured a bevy of stars like Eminem, Snoop Dogg, 50 Cent, Mary J. Blige, and Kendrick Lamar. The classic tracks like “Still Dre” and “In Da Club” stirred the hearts of the millennials. It was clear from the start that the target audience for the show was them. The Super Bowl LVI was posted on the Youtube channel of the NFL.

It was rumored that Tupac is going to give an appearance through a hologram. But the surprise performer was not Tupac but 50 Cent. He performed his hit “In Da Club” in front of the house full audience. Besides, this year’s super bowl consisted of complete hip hop headliners. It was a move on part of the NFL to connect with fans and artists who became alienated after the league’s stance on Colin Kaepernick’s national anthem demonstration. We can say that the League arranged a good event this year.

HBO’s classic series called The Sopranos made an iconic appearance in the Super Bowl with Chevy’s first electric truck. The frame-for-frame scene showcased Chevy’s 60-second ad that was similar to the opening sequence of the 1999-2006 show featuring late James Gandolfini’s Tony Soprano in a Chevy Suburban. The 2022 version of the scene became a great hit.

In the driver’s seat sat Jamie-Lynn Sigler the actor who played as gangster Tony’s daughter Meadow. She sat next to her father in the famous scene. But instead of a cigar, she has a lollipop. Then in place of Tony’s gold chains, she wears a tennis bracelet. Plus, instead of paying toll, she used the electronic E-ZPass. This video was directed by David Chase.

The rocking performance of the performers

The Super Bowl became special because of the performances of Eminem, Kendrick Lamar, Dr. Dre, Mary J. Blige, 50 Cent, and Snoop Dogg. It happened at the SoFi Stadium on February 13, 2022, in Inglewood, California. These singers and rappers were the main stars of the show. What amazed the viewers was the surprise appearance of the legendary rapper 50 Cent. He joined the performances of the main headlines of the Super Bowl LVI halftime show.  The colorful dancers wearing shiny outfits were a sight to behold.

Mary J. Blige gave a wonderful performance as she serenaded the crowd on a separate stage. Along with her backdrop dancers, she gave an electrifying performance. The ones to kick start the occasion were Dr. Dre and Snoop Dogg. They performed the live version of the 2000 hit “The Next Episode”. Then Kendrick Lamar performed his famous records like “Alright”. After him, Eminem hyped up the crowd by rapping the Oscar-winning song “Lose Yourself”.

Further, there was a surprise appearance of Rapper Anderson.Paak. He played the drums alongside Dr. Dre.

Eminem kneeled down when Dr. Dre performed the piano. It was a moving sight. One of the best moments in the show is the homage paid to Los Angeles and the West Coast. It has been twenty-nine years since Los Angeles has hosted the Super Bowl. The halftime show was a love letter to the city. It was wonderful and out of the world.

Then at the end of the performance, the artists came to the center stage to give a grand exit to the halftime show.  In this style one of the most anticipated events of the year ended.

Super Bowl was a success. There were lots of splendid movements that will get a place in history.

Also read: An Overview on How to Bet on The NFL Super Bowl LVI