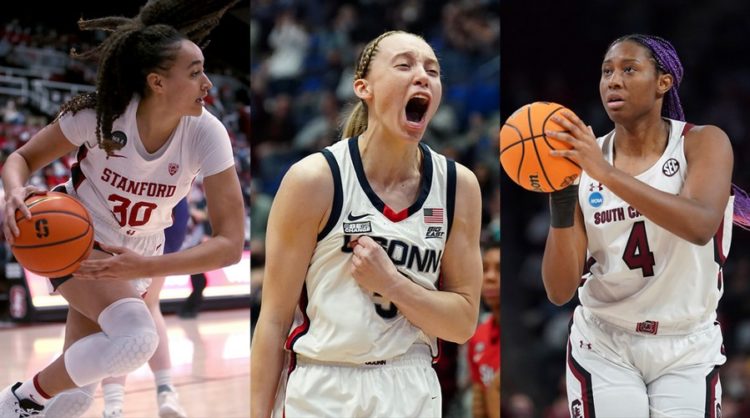 Basketball is one of those highly popular sports among men and women. Especially the NCAA Tournament is highly popular among players of both genders. So if you are a regular user of social media platforms, you will know that just 16 teams are remaining in the NCAA Women’s Tournament. Therefore, what’s better than re-ranking those teams? This will also help us determine which squads should be in the favorites and which are not.

Some of the Important Details about the NCAA Women’s Tournament

Now that only 16 teams are remaining, we can re-rank them and see which is the best one among them or the worst. Here is a video on the reranking of the teams

So here we are, re-ranking the remaining 16 teams of the 2022 NCAA Women’s Tournament. Stay with us if you want to know all the details about those 16 teams. Here are the top four teams:

As per the rankings, the No.1 seeds maintain their topmost position. Therefore, South Carolina, despite scoring only 49 runs in the winning match over Miami, remains at the No.1 position. Stanford’s win over Kansas  (91-65) could not place it in the first position.

This is because the Gamecocks defense held Miami to 33 points. In fact, they still have that non-conference win over Stanford from December along with a win over NC State. Moreover, due to a similar reason of impressive defense, NC State remains above Louisville.

If we discuss the fifth and sixth positions among the Sweet 16, Texas is above UConn. In fact, the Huskies were scraped by UCF in the second round; however, Texas had an amazing win over Utah. Needless to say, Texas’ defense is presently far better than UConn’s offense. Therefore, we can assume that they can make it to the final four in the NCAA.

Among the other teams, it is very difficult to rank these teams. This is because all these teams have shown some nice flashes in the tournament. So if we are to rank among them, Michigan will be at the top position, as they beat the Americans at 74-39 and Villanova at 64-49. However, they need to work on their defenses.

Next comes Iowa State, who redeemed themselves quickly in a match, beating Georgia in a 67-44. In fact, presently, Ashley Joens is playing her WNBA draft stock up. Lastly, we can talk about Indiana, which just barely got by 11-seed Princeton, and finally won by 56-55. It is concerning here that their defenses are somewhat similar to that of Michigan. Therefore, they need to improve it to ensure that they win their upcoming games at a better score.

We can place North Carolina in the tenth position. If you have seen their matches, you will know that despite being a five-seed, they proved to be one of the best teams in the top 10. In fact, even with Deja Kelly struggling from the floor, the North Carolinas have still found a way to win big.

Even though they are not in the top 10, Maryland’s 89-65 win over FGCU was indeed a big one. As per the views from the experts, this team can probably hang with anyone from an offensive perspective. Only they need to work on their defense.

You can group these three teams together under “good but not great.” Even though Notre Dame got a higher spot after winning over Oklahoma, it still needs to work in its defenses. On the other hand, Tennessee was initially doing well; however, later on, it couldn’t get back its winning streak. In addition, Ohio State, even after doing well in the first round against Missouri State, was knocked out in the second round.

As we end the rankings, we can say that even though both these teams have put on an impressive display in the making it this far, we cannot place them in the top 10 because of their performances.

Needless to say, the NCAA Women’s Tournament is one of the biggest events in basketball. Therefore, if you would like to know more about it, you can have a look at the re-ranking of the Sweet 16.