The 8 Best Rivers for Whitewater Rafting in The US 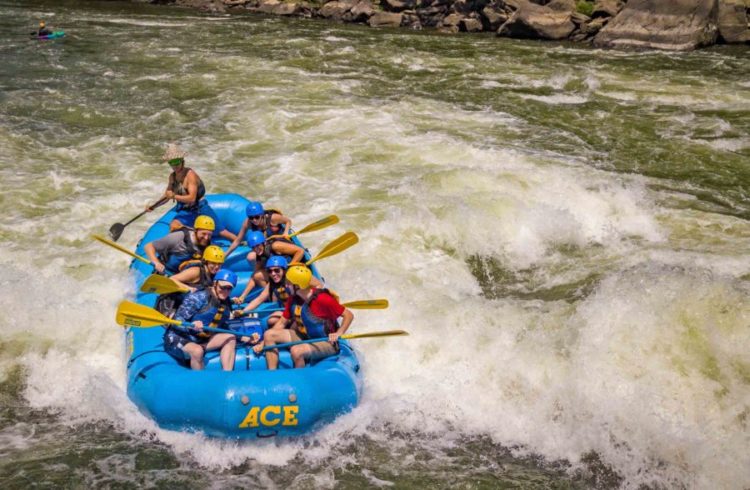 Whitewater rafting is an exciting and adventurous way to experience nature and spend time outdoors. There are several well-known destinations for whitewater rafting, like South America, Italy, and Zimbabwe, but the U.S. remains one of the most popular. The sheer number of options and varied terrains draw every outdoor enthusiast.

What is Whitewater Rafting?

Whitewater rafting is a leisure water sport that involves riding in a raft down a fast-moving river. The type of raft used can vary, but most involve inflatable boats made from durable rubber or vinyl.

Unlike river rafting, which involves rafting down a smooth and slow-moving river, whitewater rafting occurs in the fast-moving parts of the river that include white water. This means that the ride is rough and often far from relaxing. In fact, whitewater rafting can be quite dangerous. But for many rafting enthusiasts, this is part of the appeal.

Although whitewater rafting dates back to the early 1800s, it wasn’t until the 1970s that rafting took off as a mainstream sport.

The Types of Rapids

If you are new to whitewater rafting, you probably wonder where to start. River rapids are divided into classes, based on difficulty.

The 8 Best Rivers for Whitewater Rafting in the US

Narrowing down the list of ” best ” rivers for river rafting can be a challenge because it often depends on what time of year you go. Factors like temperature and rainfall can also affect the rafting experience.

Below is a list of some of America’s great waterways that also make for excellent whitewater rafting destinations.

The Snake River, in Jackson Hole, Wyoming, is the largest tributary of the Columbia River. It winds to the Pacific Ocean, just west of Astoria, Oregon. When you ride the Snake, you will travel through forests and mountains, often encountering wildlife along the way.

The Snake has eight to ten sets of thrilling rapids, including Class III Lunch Counter and Class III+ Big Kahuna.

The Colorado River is great for rafting because it has a class variety that can fit every experience and adrenaline junkie level. 226 miles of the Colorado winds through the majestic Grand Canyon, providing a unique perspective of the canyon that few get to see.

The rapids in the Gauley River in West Virginia are so incredible, people line the sides of the river near Pillow Rock, Iron Ring, and Sweet’s Falls just to watch people go down the rapids. Upper Gauley is one of the most difficult rivers to navigate—its series of Class V+ rapids should only be ridden by experienced rafters.

Who says you have to travel to the Caribbean to find white sand beaches? The River of No Return, Salmon River in Idaho, has stretches of soft white sand, hot springs, and winds through a picturesque, rugged canyon.

Running through Frank Church, the River of No Return (so-called because it is nearly impossible to traverse upstream) was established as a protected wilderness area in 1980. Rafting trips run from beginner to expert, with some of the most thrilling stretches happening at Middle Fork, where fast-paced alpine rapids offer an exhilarating experience.

Montana was originally nicknamed the Treasure State because of its abundance of “oro y plata,” “gold and silver.” Today, one of the state’s greatest treasures is the gorgeous Yellowstone Park, extending from Wyoming into mountainous Montana.

Make the most of the Wild West with a Yellowstone river rafting trip along the Yellowstone River. This tributary of the Missouri River is one of the last undammed rivers. It runs 671 miles, connecting with the Missouri and then the Mississippi, before eventually ending in the Gulf of Mexico.

Yellowstone River is known for its Class II & III rolling wave rapids, so riders will get wet and have a blast without any real threat of danger.

The Chattooga descends an average of 49 feet per mile, which adds to the ferocity of the rapids. Even the US Forest Service emphasizes that the river does not discriminate, so every rafter must use the utmost caution.

Engulfed in the lush green of the Pacific Northwest and traversing through forested canyons, the Rogue is 215 miles of wondrous waterway running from Crater Lake to the Pacific Ocean. Seeing Crater Lake, formed by a sleeping volcano almost 8,000 years ago, is worth the trip alone.

The best rapids can be found at Fish Ladder in Rainie Falls, Mule Creek Canyon, or Blossom Bar.

Starting at Yosemite, the chaotic Cherry Creek is a whitewater rafter’s dream, with an emphasis on the words white water. Cherry Creek has 15 consecutive Class V rapids. Some consider the upper Tuolumne to be the gold standard for whitewater rafting. The Tuolumne River runs through Central California, from the Sierra Nevada mountain range to the Central Valley.

With over 250,000 rivers, the United States has more freshwater rivers than almost any other country. Approximately 49 of those rivers, located in 24 different U.S. states, are known for their excellent whitewater rafting. It is no wonder that the U.S. has become known as one of the premier rafting destinations on the planet.

Whitewater rafting can be a thrilling experience, but it can also be a dangerous one, too. When choosing a rafting guide, be sure to go with an experienced and knowledgeable guide who emphasizes safety above all else. Always wear a life vest, a helmet, and sturdy footwear (no flip-flops), remain alert, and keep your eyes on the water.