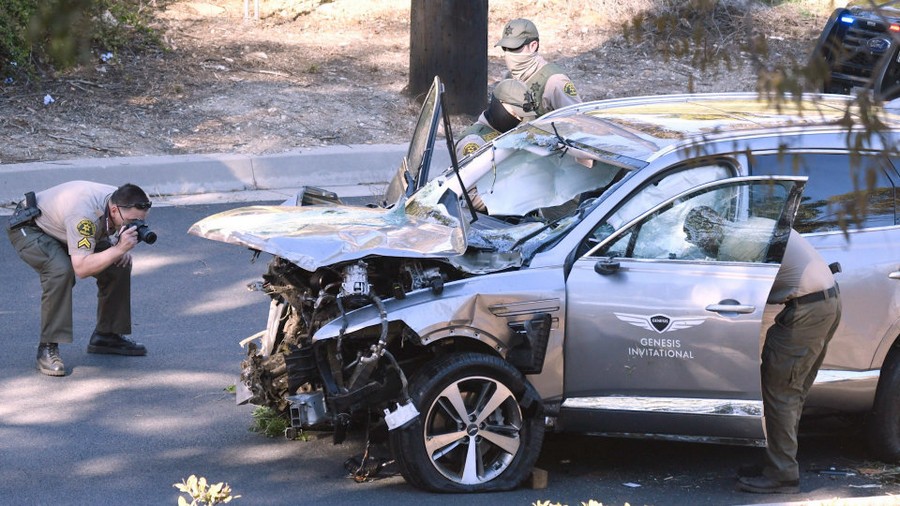 Tiger Woods is a popular American professional golfer. His full name is Eldrick Tont “Tiger” Woods. Currently, he is tied for first in PGA Tour wins. Also, he has created lots of golfing records. He is widely regarded as the best golfer of all time. He is forty-five years old. From 2009 to 2010 he took a break because of his personal problems and injuries. Unfortunately on February 23, 2021, he met with an accident. He was hospitalized with serious injuries after a single-car collision. He underwent emergency surgery for his fractures.

After this, he revealed in an interview his full-time career in golf is over. But he shared that he will continue to play a few events a year. Know all the details about the popular golfer Tiger Woods and Tiger woods car accident.

The early life of the golfer

The birth date of Tiger Woods is December 30, 1975, and he is from Cypress, California. His parents are Earl and Kultida. His father was a retired U.S. Army officer. He got the nickname Tiger to honor his father’s friend a South Vietnamese Colonel Vuong Dang Phong. He was also nicknamed the Tiger.

The first person to reveal about the accident was Steven Gregory, an iHeartRadio correspondent. Then the news was confirmed by Los Angeles County Sheriff’s Department. The LA Lomita station responded to the situation.

The LA County Sheriff Alex Villanueva shared with the reporters on Tuesday that the responders arrived on the scene at 7:18 a.m. PT. The first person to be there on the scene was Carlos Gonzalez. He called the LA’s fire department to help Woods out of the vehicle. Then the fire department came on the scene to rescue Woods. They removed him from the car. His injuries were described as trauma level as his vehicle rolled many times before crashing. The responders decided to transfer Tiger Woods to Harbor-UCLA Medical Center. It was the nearest hospital with a trauma center. Woods was rushed to the hospital in an ambulance and underwent surgery.

Also read: A Guide on the Different Types of Car Accidents

The official Twitter account of Tiger Woods shared updates about his status. He underwent a long surgical procedure and also experienced “significant orthopedic injuries to his lower right extremity”.

Woods had open fractures in his upper and lower portions of the fibula and tibia. A rod was inserted inside the tibia and the other injuries on the foot and ankle were stabilized with screws and pins.

Daniel Miller from Los Angeles Times reported that Woods suffered a shattered ankle and two fractures. When he entered the hospital the Golfer was in a serious yet stable condition. The first concern of the doctors was to stabilize his injuries. They saw it from an orthopedic and vascular standpoint. The surgeons also presumed that it will take a long time for Woods to recover from the injuries.

The cause of Tiger Woods car crash accident

The police on the scene shared that Woods was traveling at a “relatively greater speed than normal” on the northbound on Hawthorne Boulevard. The place where he crashed was notably steep and curvy and has a speed limit of 45 mph.

They shared that Wood’s car made contact with the dividing median which destroyed the wooden sign that has the writing “Welcome to Rolling Hill Estates”. Then it crossed two southbound lanes and it hit the curb and the trees. The car rolled several times in the embankment and rested on its side thirty yards from the road. There were no skid marks or signs of braking near the crash site.

The factor not considered in the crash is the weather. The responders also did not notice any sign of impairment from Woods. The doctors did not draw blood from him to see if it had alcohol or not.  But the LA department is going to perform more investigation on Woods’ crash. They will wait till the injuries of Woods heal.

The car driven by Woods during the crash

Woods was traveling in his 2021 Hyundai Genesis GV80 which is a mid-size SUV. The vehicle was offered to him by Genesis Invitational as the car has tournament logos. The golfer hosted the tournament at the Riviera Country Club in Pacific Palisades, California. It was not uncommon for the players to keep the courtesy car for a few more days.

The SUV was totally destroyed in the crash. But its interior was still intact. If Woods was not wearing his seatbelt this accident would have proven to be even more fatal. The front end of the car was completely ruined. The bumpers were destroyed and the airbags were deployed in the car. The interior of the car withstood the crash that gave Woods a cushion to survive the car accident. The responders shared that Wood is lucky to be alive.

The Twitter account of Los Angeles County Sheriffs wrongly stated that the first responders used Jaws of Life to save Woods. But an office later clarified that they used an ax to break the windshield. Then they used a pry bar to take off the seating from Wood’s legs. After removing Woods from the vehicle they put him on the backboard and quickly carried him to the trauma center through an ambulance.

The reason for Tiger Woods traveling to LA

Woods stayed in LA after the 2021 Genesis Invitational. He took part in the two-day content shoot with Golf Digest and GOLFTV. He gave celebrities golf lessons at the Rolling Hills Country Club in Rolling Hills Estates, Calif. Some of the popular personalities who were part of it are NBA star Dwyane Wade and actor David Spade. They shared their experience with Tiger Woods on their respective social media pages. But unfortunately, these happy circumstances ended with a disaster. Tiger Woods was driving the car beyond the speed limit because he was getting late to meet Saints quarterback Drew and Chargers quarterback Justin Herbert for a shoot.

Tiger Woods is a great golfer. He is talented at what he does. But now because of the car accident, he has to limit his golf time.

You may also read: 5 Things to Do After a Chicago Car Accident