The History and Evolution of Headphones 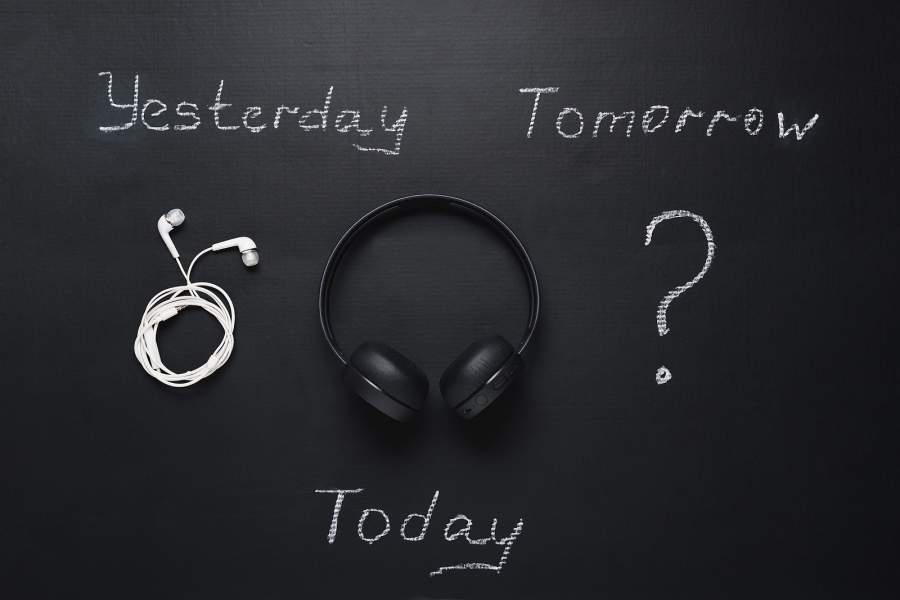 Do you remember using those bulky headphones with tangly wires? In an age of wireless headphones, it’s hard to think of the old-age counterparts. We’re looking a timeline much before iTunes and iPods, and even before The Beatles. The answer to the question, “Who invented headphones?” will be a revelation to how wrapping your ears, away from the noise, has become an increasing necessity over time. Besides, you do enjoy being a good conversation starter, don’t you?

Who invented headphones? The Flashback

Believe it or not, the first-ever headphones were not made for listening to music. Telephone operators in Britain around 1880 used them, where a single earpiece hung on their shoulders, much like boom boxes you know of. Then Ernest Jules Pierre Mercadier, a French electrical engineer patented the earbuds technology in 1891 to be used as telephone receivers.

Come 1910, it was Nathaniel Baldwin from the States who invented headphones at his home’s kitchen. Back then, private investors ignored the benefit. Thanks to the US Navy, which ordered around 100 pairs from him, headphones got popular.

Revolutionizing Baldwin’s concept was Beyerdynamic, a German audio equipment manufacturing company that developed dynamic headphones, none other than the historic, DT-48 model in 1937. There have been various upgrades done on this model until 2012.

During WWII, headphones were getting produced more for the public. Jumping on the bandwagon was Austrian audio manufacturing pioneer, AKG, who came up with the K-120 headphones that looked incredibly modish back in the day due to their sleek headband.

2. The Beatles and Flower Power

Headphones were still not able to dominate the market on both sides of the Pacific during WWII. It was around the late 1950s when avid Jazz artist from the US, John Koss, invented the Koss SP-3. These were the first stereo headphones, which he called ‘stereophones’. These were specifically marketed to audio engineers. So, when The Beatles were getting increasingly popular across the globe in the mid-60s, Koss produced the Beatlephones. These were sold out globally and yeah, celebrity endorsement at its best!

3. Enter the time that defined portability

Who can leave out Sony when talking about headphones! It was in 1979, when the iconic portable cassette stereo player, the Sony Walkman came to the fore. This player also included the cool MDR 3L2 headphones. The headband was so slim that renowned audio manufacturing brands, such as Philips and others started making the same. These headphones were simply stylish for another two decades. If you are going for the 1979 Sony Walkman for your retro vibe today, make sure both the pockets run deep.

4. What? Can’t hear anything even if someone is screaming his lungs out!

5. Can’t become a DJ without that thump and swank!

It’s true. Every DJ gig is bass-heavy. Even while listening to your favourite DJ on playback must feel the same. This is what legendary DJ, producer and founder of V-MODA, Val Kalton also feel. Back in 2004, his brand specifically made headphones that had booming bass with high-quality materials. It was among the key players for the evolution of good deep bass in headphones. Also, the brand popularised stylish headphones, if you didn’t know. This was soon followed by many other brands, among which the more prominent names, you may know are the Beats headphones by Dr Dre and the head rattling headphones by Skullcandy.

6. Bolt from the Bluetooth

Bluetooth headphones have been a total game-changer in this decade. But they were introduced in 2004. Considering the needs of the modern-day individual, wireless headphones have made way into everybody’s life super-fast. There are about 5 versions of Bluetooth connectivity today and each update offers greater range and less consumption of energy.

More than ever, the competition among different brands offering superior Bluetooth headphones is on the rise. It is not just about wireless connectivity, you see.

You can check out a newcomer in the market, the high-tech wireless headphones, PLAYGO BH70. Now, this newbie has updated features that other brands don’t even have yet. They have an AI-algorithm that can give you a far superior listening experience by detecting the frequencies you can’t hear. So much so, these are Active Noise Cancelling headphones with four different in-built mics to fathom and block any kind of noise.

The use of earphones with Bluetooth connectivity has increased ever since Apple introduced its AirPods and ditched the sockets. But they are so expensive! World of PLAY’s budget-friendly Bluetooth v5.0 neckband in-ear headphones gives you great sound quality at a very affordable price. The brand is proud and sure about the quality of its wireless audio devices. It’s worth a try, you’ll be surprised by the audio experience.

Selling Like Hotcakes: The Ever Elusive Sony Ps5 Restocks Once Again

MP3 Juice Downloader: How to Download from Mp3 Juice?

Top Abilities of A Data Scientist and How to Improve Them