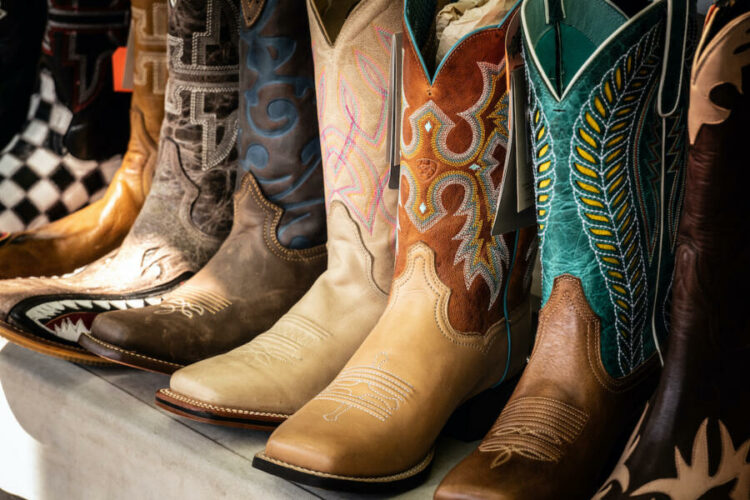 The era of the American frontier is long gone, but the spirit of the Wild West lives on. You can hear it speaking through elements of culture. Traditions, cinema, fashion – the language might be different, but the message remains the same: “the Wild West lives on”. Ages may pass, but cowboy boots and hats won’t vanish from the store shelves as long as there is a place for them in people’s hearts.

It takes a fraction of a second to recognize cowboy’s signature attributes, but how much do we know about them? When were they introduced, and what are their origins? How much have the movies influenced the way we preserve Western wear?

The answers to these questions and a brief tour of styles and design of cowboy’s traditional trappings in our today’s article.

Cowboy Boots: When and Why

Riding boots have always been an indispensable part of the equestrian lifestyle, but no other design has managed to go down into history the way cowboy boots did. Even after a hundred years, the companies that initially made such boots continue their trade, with new passengers hopping on that Western-style train every now and then.

The choice of brands is wide, and sometimes it might be hard to tell the difference between the boots of the two companies. Whether you prefer Corral boots or have already given your heart to Twisted X doesn’t matter. What matters is that you don’t let the spark of the Wild West fade away.

Though enjoying the fame of a distinct attribute of the American frontier era, cowboy boots were inspired by traditional riding footwear of another culture. The “vaquero” tradition, originating in Spain, was brought to the Americas by conquistadors and Spanish settlers. With them came new cattle-rising traditions and, most importantly, horses that had been extinct here since the end of the prehistoric ice age.

The change wasn’t immediate, of course. It took decades for the culture of vaquero, who first came to Latin America, to transform and spread to the territory that is now the Southwestern United States. The fact that the climates of Spain and the American southwest are similar facilitated the process: the grass was sparse in both regions and thus cattle needed more area to obtain sufficient forage. The areas were too large for a person to cover on foot, which gave rise to the culture of the horseback-mounted vaquero.

The design of traditional cowboy boots was influenced by both boots worn by cattle herders from North Mexico and military footwear tailored for cavalry riders. Functionality was the main priority, and many features prove that fact. The footwear was designed for riders and catered to their needs. The slick leather sole allowed the rider to easily insert their foot into and remove from the stirrup. The toe was rounded for a comfortable fit and slightly narrowed for easier insertion.

Heels were another crucial aspect of cowboy boots. Their tall angled design ensured that the rider’s foot wouldn’t slide forward through the stirrup, preventing possibly lethal danger. In fact, many features of cowboy boots were introduced to address this particular issue. Traditional designs had no laces as they increased the risks of a foot getting stuck in a stirrup. Cowboy boots were also known for a comfortably loose fit – a feature that some later disciples of western fashion didn’t appreciate.

This feature was added to allow the body weight of the rider to pull them out of the if they get unseated lest they should get stuck and be dragged by a panicking horse. The tall shaft compensated for a somewhat loose fit and helped to hold the boot in place without lacing. It also served as universal protection. A tall shaft protected a leg from rubbing on the stirrup when a rider was mounted and from brush, thorns, and rattlesnakes when dismounted.

Before the Industrial Revolution, all boots were custom-made. The introduction of advanced sewing machines allowed for the mass production of certain styles of boots. The Wellington boots (shorter cavalry-oriented) were popular with cowboys until the 1860s when they passed the crown on to boots featuring a traditional design. The cattle drive era of 1866-1884 also changed how cowboy boots were worn.

Because of the workload, the footwear wore out much quicker, so cowboys acquired more decorative dress boots to wear in town. This event brought even more variety into boot design. Stitching, cutouts, and various geometric and natural patterns made their way onto cowboy boots. Embellishment wasn’t a novelty, but it became more widespread.

The next significant change to cowboy boots’ design came with the advent of rodeos. The process of calf roping and other rodeo activities were quite different from the regular cowboy routine and thus required a change in footwear design. The roper boots featured lower heels and shorter shafts, which made running more comfortable.

However, these boots were more likely to fall off unintentionally, and a lace-up design was soon introduced to resolve that problem and provide additional ankle support. Roper boots never fully replaced traditional design but grew into a separate style.

The cinematography also left its mark on cowboy boots. The Western movie frenzy of the 1940s altered the way people perceived cowboy boots. A very narrow, stylized pointy toe was introduced. Such a modification had little to do with practicality. It made boots less comfortable, but since they were meant for movies and decorative purposes rather than functionality, this modification lingers in many modern boot designs.

Modern cowboy boots take after their ancestors but are much more diverse in their designs. Though spurs that often came together with them are now rarely seen, other features of both traditional and roper-style boots are not forgotten. The choice of materials, which had been gradually expanding, has now reached the point where even such exotic hides as alligators and stingrays are no longer exotic enough.

Western Style: What and How

Cowboy boots are often called western boots for a good reason. They are an indispensable element of Western wear – the style inspired by the clothes worn in the 19th-century Wild West. This style is not homogenous as it includes both historically accurate reproductions of American frontier clothing and garments popularized by movies and television. Despite popular opinion, it isn’t a style reserved only for country music performers. Western wear remains a fashion choice in, unsurprisingly, western states.

Apart from western boots, it traditionally comprises one (or all, depending on the dedication) of the following elements.

It remains a big mystery which attribute of a cowboy is the most recognizable: a hat or boots. Regardless of the answer, cowboy hats are undoubtedly a signature element of the western style. You might be surprised to learn that the hat we consider traditional wasn’t in use until the 1870s. Before that time, westerners favored bowler hats because they were less likely to be blown away by the wind.

Stetson introduced the progenitor of the modern-day American Cowboy Hat – Boss of the Plains – in 1865. Similar hats then featured stampede strings that prevented them from being winded away. Ten-gallon hats are also popular, though their origins come not from historical figures but from the movie industry.

The distinctive feature of Western shirts is a stylized yoke on both sides of the shirt. An attentive eye might spot some similarities with late Victorian fashion since the two periods overlapped. The Western dress shirts were also elaborately decorated with piping and embroidery. Such splendor comes from the fact that these shirts were often worn by rodeo cowboys to be more easily differentiated.

Another popular shirt choice is the shield-front shirt that was often worn by US Cavalry troopers. They lacked intricate embellishments but featured yellow piping and brass buttons.

Jackets and coats are another element of a western outfit where choice is anything but scarce. The renowned fringe jackets, dusters, and ponchos were used by the original cowboys. At the same time, several garments were reinterpreted. Those include leather waistcoats and jackets featuring the piebald color of cows.

Though wool was the primary material for pants during the early days of the Wild West, it is denim that became a hallmark of the western style. It wasn’t for no reason, though. Denim overalls became extremely popular with Gold Rush miners because of their cheapness and breathability. By the 1870s, Levi Strauss’ modified design was adopted by cowboys. The renowned Levi’s jeans were often accessorized with belts featuring large decorative buckles.

Leather chaps were another popular accessory that was used for protecting the lower part of the pants from cacti spines. The two varieties were tight shotgun and wide batwing chaps.

Cravats and neckties remained common accessories of respectable Westerners until the 20th century. Working-class people used simpler bandanas for the same purposes. And we simply can’t but mention the favorite accessory of Colonel Sanders that also originates in the Wild West. The bolo tie was another popular accessory that remains strongly associated with the West.

Also read: How to Choose the Right Color Boots for Winter

How To Fold a Shirt Quickly

The Most Popular Church Dresses for Women

Trousers for Women: How to Style Different Trousers?