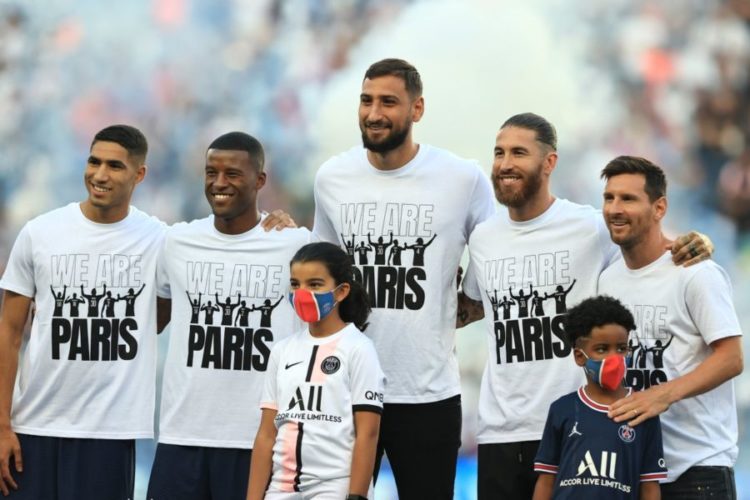 On paper, Paris Saint-Germain Football Club (PSG) were by far the biggest winners of the 2021 summer transfer window as they secured sensational moves for Georginio Wijnaldum, Achraf Hakimi, Gianluigi Donnarumma, Sergio Ramos and Nuno Mendes. As if that was not enough, they completed one of the most talked-about signings of the summer and perhaps in football history when they announced the signing of Lionel Messi.

With only Hakimi joining on a permanent transfer fee (and Mendes on loan) the rest joined as free agents and Europe stared in astonishment at the ridiculously talented squad available to Mauricio Pochettino.

The French champions were savvy in all their dealings as they embraced the psychological advantage of keeping Kylian Mbappe despite Real Madrid’s reported world-record offer. The French superstar would be completing a fantastic attacking trio alongside Neymar and Messi and the Paris side looked well-equipped to win the much-coveted Champions League.

Being the unpredictable spectacle that football is, the early weeks of the season were complicated by late-returning players following international commitments over the summer. An unsurprisingly slow start has been endured but inconsistencies remain and doubts are beginning to creep in concerning the team’s balance.

Although they sit ten points ahead on the Ligue 1 table and are in with a chance of top spot in their Champions League group, the PSG team is underperforming individually and in-play trends show that they are not as dominant as they should be.

So why have PSG’s new superstars not been performing at their optimal level under Pochettino? We take a look at the most prominent reason why they have struggled so far.

A palpable lack of identity

Their Argentine head coach has been under fire for the absence of any clear playing profile. The lack of cohesion has left PSG relying on Mbappe’s individual brilliance in front of goal.

Six-time Ballon d’Or winner, Messi, is alarmingly yet to register a goal or assist in five league matches having played consecutive games only once. The 34-year-old was clearly not signed to win PSG another league title, but his lack of impact has raised concerned eyebrows.

Messi himself weighed in on his Ligue 1 goal drought with an honest assessment of the French top-flight. “Ligue 1 is a more physical league, where games are hotly contested, where there is a lot of back and forth,” The ex-Barcelona man said. “The players are strong and fast. Physically, it changes a lot.

“In Spain, all the teams try to play a lot more and they keep the ball from you if you don’t press well. The biggest difference, though, is physically.”

Although he has notched three strikes in the Champions League, this is the first time it has taken Messi more than eight match days to score a league goal since the 2005/06 season.

He is struggling to get his rhythm after an up-and-down summer with winning the Copa America, the unforeseen emotional rollercoaster of having to leave Barcelona and moving to PSG.

Messi is human after all and taking time to adjust to the physicality of the French top-flight, as well as the challenges of playing for a new team for the first time in his career.

On the pitch, Messi is averaging nearly 40 percent less touches of the ball than he was with Barcelona last term and also down in chances and shots. The off-field adaptation is as important as gelling on the pitch and the culture shock of moving homes – for the first time in his career – undoubtedly took a toll on the Messi family.

However, the same cannot be said of Hakimi who has taken to the PSG side like a duck to water, which is no surprise given the Moroccan is arguably one of Europe’s finest full-backs. Hakimi has three goals and two assists in 12 league games while on-loan Nuno Mendes has been reliable at the back and continues to betray his stature as a 19-year-old left-back.

Wijnaldum was expected to bring a unique box-to-box presence that PSG lacked in midfield, as his energy would guarantee some attacking bite behind the superstar forward trio.

The Netherlands international was an integral part of Jürgen Klopp’s Liverpool side that won the Premier League and Champions League but has so far struggled to settle into a role in Pochettino’s team. Nevertheless, he looks to be making progress with two trademark predatory finishes against RB Leipzig in their latest Champions League game.

Elsewhere, Gigi Donnarumma is often rotated with Keylor Navas and it is only a matter of time before he usurps his teammate. But worryingly of all, Sergio Ramos is yet to kick a ball in anger for the Parisians as he continues to struggle with fitness issues which have plagued him since his final months at Real Madrid.

There are a combination of reasons why all of PSG’s star-studded lineup has yet to combine into a cohesive unit, and eyebrows have been raised at the man in charge of what is the most high-profile managerial job in Europe.

In conclusion, the Parc des Princes side have little worries in terms of their season’s progress, as results keep ticking over while their new recruits get to terms with matters on and off the pitch.