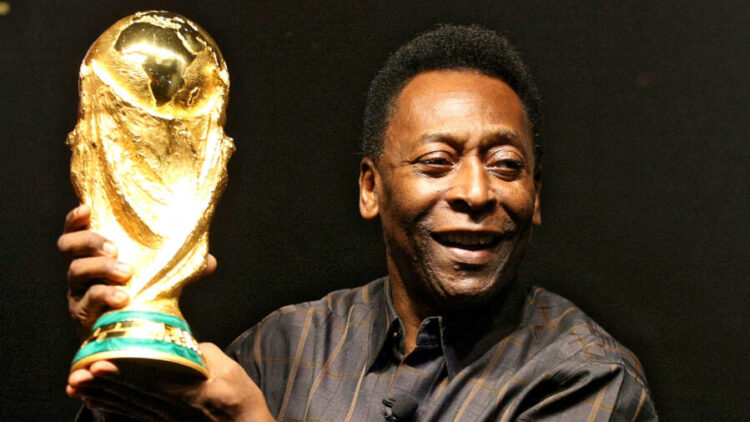 Pelé was a 14-year member of the Brazilian national team. Brazilian footballer Pele who won three World Cups and was named International Olympic Committee Athlete of the Century.

Edson Arantes do Nascimento, better known as Pelé, amassed a fortune as a professional football player.

Celebrity Pelé’s net worth is expected to reach $100 million by the end of 2022, according to Net Worth. Pelé earned more money than any other athlete on the planet during his prime. According to reports, he earned around $150,000 per year in the 1960s.

Since his poor upbringing, the protagonist’s life has undoubtedly improved. Pelé was born as a child labourer in the Brazilian state of Minas Gerais in 1940. His father had also played professional football and had taught him the fundamentals of the game at a young age. Pelé trained with a grapefruit instead of a soccer ball because his family couldn’t afford one.

When he was in his teens, Pelé began playing for youth clubs in Brazil. At the age of 15, he impressed the coach of Santos FC with his game and was signed by the sports club a year later.

He won his first World Cup in 1958, scoring two goals against Sweden in the final. Brazil won the World Cup again in 1962, despite the absence of Pelé due to injury. The team had a disappointing World Cup run in 1966, but won it again in 1970, with Pelé named Player of the Tournament.

The footballer continued to play for Santos FC in leagues, helping them win the 1962 Intercontinental Cup and the 1963 Copa Libertadores. Three years later, a record-breaking crowd of 62,000 gathered at Giants Stadium to watch him play.

Over the years, Pelé has donated to a number of charitable organisations, including Action for Brazil’s Children, The Littlest Lamb, Gols Pela Vida, SOS Children’s Villages, and Prince’s Rainforests Project.

In 2016, he raised £3.6 million through the auction of over 1600 items from his collection. In 2018, he founded the Pelé Foundation, a non-profit organisation dedicated to empowering impoverished children worldwide.

The player was also embroiled in a number of financial disputes. In 2001, he was implicated in a corruption scandal involving the theft of $700,000 from UNICEF. In 2016, he filed a lawsuit against Samsung Electronics for ‘false endorsements and violation of his right to publicity,’ seeking $30 million in damages.

Pelé also made significant real estate investments. He paid $156,000 for a Hamptons home in 1979, which he sold for $2.85 million in 2018. During his tenure, he transformed the property into an opulent mansion spanning over 3,500 square feet.

Edson Arantes do Nascimento was born in Três Coraces, Minas Gerais, Brazil on October 23, 1940. Dondinho, his father, was also a professional football player. Moreover, Pelé grew up in a footballing family.

Pelé was given the nickname after mispronouncing the name of Bilé, a goalkeeper who played for Vasco de Gama when he was younger. In no language, including Portuguese, does the word “Pelé” have any actual meaning.

Pelé grew up in a poor neighbourhood in Bauru, Sao Paulo, barely scraping by. Pelé learned to play football at a young age despite spending the majority of his childhood working to support his family. Because his family couldn’t afford a soccer ball, he practised with a grapefruit. Pelé began to play for several youth teams in Brazil as he grew older, and he excelled while playing indoor football (futsal).