This is Manchester City’s Premier League Title To Lose 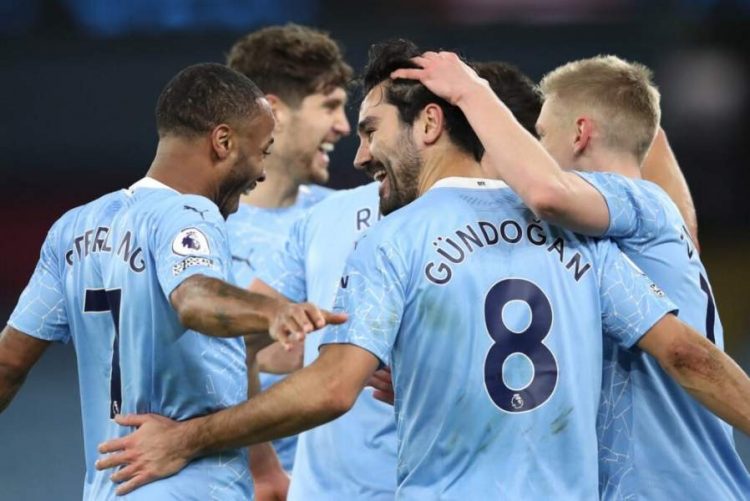 "Manchester City" by Sam Lee is licensed under CC BY 3.0

The English Premier League delighted fans when it made the decision to run the 2020-21 season despite the ongoing COVID-19 pandemic. No fans are happier with that decision right now than those of Manchester City who find themselves in pole position for what will be their seventh domestic league title. Pep Guardiola’s Manchester City team are currently perched at the top of the Premier League table and have a five-point cushion between themselves and arch-rivals Manchester United, who they have a game in hand over. City is the overwhelming favourites to win the Premier League with the best sportsbooks in the world.

City Are Unbeaten In Their Past 21 Fixtures

City is unbeaten in their last 21 games in all competitions. Jose Mourinho’s Tottenham Hotspur was the last team to beat them and that happened all the way back on November 21. Since that 2-0 away defeat, City has embarked on a streak that has seen them win 10 consecutive Premier League games. They look unstoppable. Not only are City brushing aside anyone who dares stand in their way, but they’re also managing to do this without the likes of the club’s all-time leading goalscorer Sergio Aguero and their talismanic midfield general Kevin De Bruyne.

Guardiola’s men are known for their attacking prowess and rack up goals like no other team. They’ve managed to score 43 goals in 22 games despite Aguero only managing five appearances and City often playing without a recognized striker on the field. Thirteen different players have found the back of the net during the league campaign to date, showing the team is working hard for one another.

German midfielder Ilkay Gundogan has been a revelation this season. Guardiola utilized the German in a more defensive role in the previous season but has played him in a more advanced position recently. It has been a master-stroke by the Spaniard because Gundogan has nine goals in 17 Premier League outings, after scoring 15 in his previous 102 games.

Flair Up Front, Solid At The Back

The blue half of Manchester are best known for their attacking flair that produces plenty of goals, but it is their rock-solid defence that has caught the eye this season. Guardiola’s men have conceded a miserly 14 goals this season, eight fewer than any other team in the top flight.

A resurgent John Stones is one of the main reasons for this. Many football pundits wrote off Stones after several shaky performances over the past couple of seasons. The ball-playing defender has looked unsettled since Vincent Kompany left City at the end of the 2018-19 season. Several centre back partnerships simply haven’t worked out, leaving Stones to play in a defensive midfield role or be left out of the starting 11.

Stones has now forged an amazing partnership with Portuguese superstar Ruben Dias. This pairing works perfectly together. Dias, a £61.64 million summer signing from Benfica, has been a revelation and has put in some strong defensive performances. He is a rock in the heart of the City defence and him being there has allowed Stones to get back to his brilliant best.

It is difficult, if not impossible, to look past Manchester City winning the Premier League title this season. They are scoring goals for fun despite a lack of striker options, they have the best defence in the league by some distance, and they still have Aguero and De Bruyne waiting to come back into the side.

They play second-placed Manchester United on March 6 and third-placed Leicester City on April 3. Guardiola’s squad of superstars will have one hand on the coveted Premier League trophy if they come away from those two fixtures with at least a share of the spoils. It really is Man City’s Premier League title to lose this year.