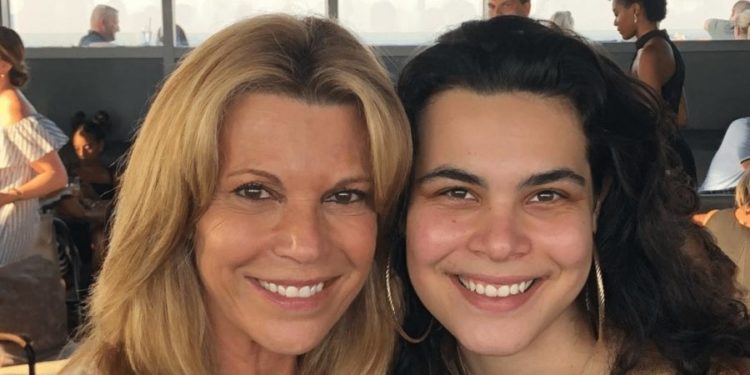 Many people are fans of the show called Wheels of Fortune. If you are a fan of it then you may know about the beautiful Vanna White? She is a well-known American personality who hosted the Wheel of Fortune for many years. Her age is sixty-four now. Do you know that she has a twenty-three-year-old daughter named Gigi Santo Pietro? But she does not use the fame of her mother to get famous herself. That is why there are only a few details available about Gigi Pietro. If you want to know more information about her then read this article.

Where is Gigi from?

Who are Gigi Santo Pietro parents?

George Santo Pietro is a restaurant owner who married Vanna white in 1990. White was mourning the death of her fiancé John Gibson who was a dancer turned actor. But he died in a plane crash in 1986 after getting engaged to White in 1980.

Then Vanna White and George Santo Pietro met and fell in love. She became pregnant in 1992. Then she announced her pregnancy to her fans in the Wheel of Fortune show. In one of the episodes of the show, the answer to a puzzle was “Vanna’s pregnant”. But she miscarried the child after the episode. She again got pregnant and gave birth to her son Nicholas in 1994. Then she gave birth to Gigi Santo Pietro in 1997. But White and San Pietro decided to divorce and finally got it in 2002.

Vanna White revealed in an interview with Larry King that her daughter Gigi always comes along with her to watch the Wheel of Fortune taping. Her daughter has seen the taping many times more than anyone else. So it seems as if Gigi Santo Pietro likes to watch her mother work in the show.

Gigi Santo Pietro was interested in acting and modelling from a very young age. But she focused her younger years on studies. She enrolled at New York University’s Tisch School of the Arts and graduated from it in 2019. Also, she is a physically active girl because she performs gymnastics and soccer.

Then after completing her studies Gigi appeared in “Beaches Resorts Week 4” in 2010. Also, she was lastly seen in the episode of “CBS News Sunday Morning” in 2020. Now she is also active on Instagram. She posts interesting content and pictures on Instagram daily. Further, more than 1000 people follow her.

How is Gigi’s relationship with her mother Vanna White?

Gigi Santo Pietro has a close relationship with her mother. After her parents’ divorce, she stayed with her mother. Now her mother is married to John Donaldson who is working as a contractor. She began to date him in 2012 and got introduced to each other through mutual friends.

What is the net worth of Gigi Santo Pietro?

As Gigi Santo Pietro is a celebrity kid, she is rich. But her net worth details are not available as of now. But her parents are wealthy people who want their kids to experience every comfort.

Gigi’s father is a restaurateur and real estate developer and he has a net worth of 14 million dollars. Also, the net worth of Gigi’s mother is $60 million. She earned most of the money from hosting the popular show Wheel of Fortune. Also, she has acted in a few movies too. She set the Guinness world record for being the “most frequent clapper”. Therefore being the daughter of rich parents Gigi is living a luxurious life.

Gigi is a well-known celebrity kid. Many people know her as the daughter of Vanna White. But she likes to keep her life low key. She never presumed to use her status to get things easily in life. Also, Gigi is a lover of travel and animals. That is why many people are drawn to her down to earth attitude.

You may also like: Robert Ellis Silberstein Married Life and Net Worth