What is A Barndominium? Should I Buy One? 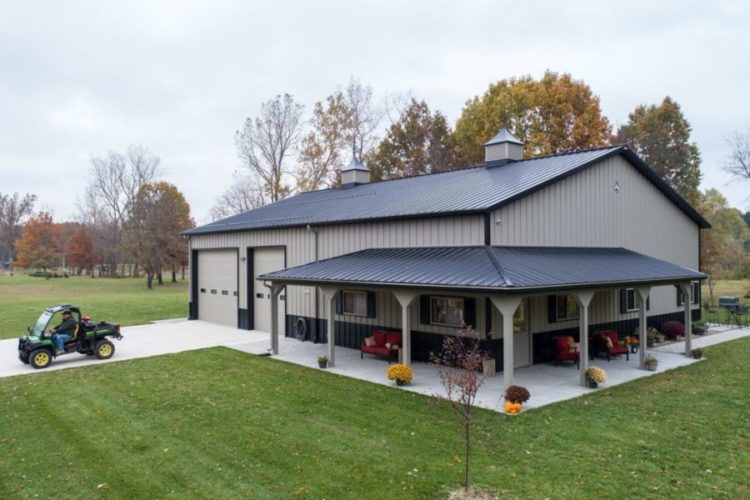 Barndominium is becoming the fastest growing trend in home styles in the United States. It is considered both practical and aesthetic and at the same time offers the homeowners a space to practice their hobbies and interests. Without constructing a separate physical structure they can create space in their home. Many years ago this was the space that helped people to store pantries and other items.

The barns or sheds were under the homes and above it the homes were constructed so these were one structure. Now, this style is coming back as many are finding it a convenient style. Here you can find all the details of the Barndominium.

Barndominium – What it is?

The Barndominium is a combination of a barn and a condominium. The style is a mix of living areas built above or near a large open space that can be used as a barn, workshop, shed or others. The homeowners can use this space for performing their hobbies. This is the same as any rustic style homes but most of the Barndominiums made today are large metal structures.

What is the origin of the style of Barndominium?

The concept of the Barndominium style was invented hundreds of years before. For instance, the Low German House for example is a kind of vernacular architecture popular in Germany and the Netherlands that is a combination of the living quarters, barn and byre. The Amish and Mennonite communities living in North America still attach their homes, barns and workshops in a single building.

Barndominium is a term that appears to have first resurfaced in1989. The real estate developer Karl Nilsen in the 1980s created planned communities with the theme of raising horses. Many country club homes were constructed around the golf course and Nilsen wanted the horse owners to have their communities with a lot of space for their equine companions.

Further in the 1989 New York Times article, the horse lover’s community of Nilsen planned to sell the homes with fenced pastureland for the families to manage their horses near their homes. Instead of constructing a separate stable, Nilsen thought of building a structure and that idea led to the Barndominium concept.

The living quarters were placed on the top of the home structure and the stable was built under it. Though this project did not take off as planned the idea of modern homes that had living quarters for both humans and their animals became popular.

Most of the Barndominiums today are large and open structures. They are built from a steel frame and a sheet metal sliding. The spacious and open nature design offers the building the appearance of a barn or storage building. The interior living space of the building is designed above or around the open area.

For the people, the Barndominiums offer great space and comfort. Along with that, they can also enjoy various amenities in their living space that gives more room to live to do their hobbies without any constraints.

Where are the Barndominiums available?

One of the famous regions where the Barndominiums are present is in the Western states like Texas, Wyoming and Montana. As these places have many large and open areas and also the residents in the areas like to keep their horses near them. Driving by horses is still a trend in these states. So because of this, Barndominiums are preferred by many people. These types of home designs offer extra space for the homeowners and also space to keep their horses. Also, they can enjoy lots of open areas.

Homeowners living in the Barndominium style of homes can keep their RV or brats on their property. They can repurpose their open space into a huge indoor garage. At the same time, they can use it for their hobbies like pottery, carpentry, woodworking and more.

Today many companies are also building and selling wood-framed structures that they name Barndominiums. These are also available in sheet metal and steel framing but if homeowners prefer they can also get wood Barndominiums.

What are the advantages of Barndominiums?

One of the major benefits of owning a Barndominium is that it offers lots of room for customization. The builders can design a Barndominium based on the needs of the homeowners and it is easy to do it. It can fit the requirements of any homeowner who likes to have this on their property.

The living quarters of the homeowners are located in the second story above the barn, storage area or workshop. But single storey Barndominiums are also becoming popular.

The homeowners will also be able to have long windows on the south-facing side. This design is useful for passive solar heating which allows heat from the sun to come inside the home. Then the heat is stored in the thermal mass of the floors.

Other important aspects of the Barndominiums are

As the Barndominium is built with steel framing it is durable. It will last a lifetime and also can withstand outside exposure.

The Barndominiums can be used as a living or workspace so it is a great option for the people who need to work from their homes. The open interiors of the home can also help in making renovations easy and convenient. It allows homeowners to build homes and workspace that can last a lifetime.

Answer: The taxation for Barndominiums is a difficult question to answer because it depends on the tax regulations of the area. The tax offices may look at square footage and comparable houses. You can speak with a local assessor to check how the Barndominiums can impact your property tax.

Question: Do Barndominiums have value?

Answer: The Barndominiums are the same as a traditional house when it comes to value. The things that are considered to decide its value are the time of sale, square footage, age, architectural features, construction quality and more.

Question: Is it safe to live in a Barndominium?

Answer: The Barndominiums are made of solid wood timbers, and metal and steel components. That is why it is safe to live in Barndominium. Many think that it is much safer to live in a Barndominium than a traditional house.

Question: How much does it cost to build a Barndominium?

Question: How to build a Barndominium?

If you want to have a Barndominium then you can choose the services of a professional company. But there are also DIY steps available for you to build one on your own.

Best Medicine Cabinets of 2022 for your bathroom