What is DeVonta Smith’s 40 Time? Here is What We Know 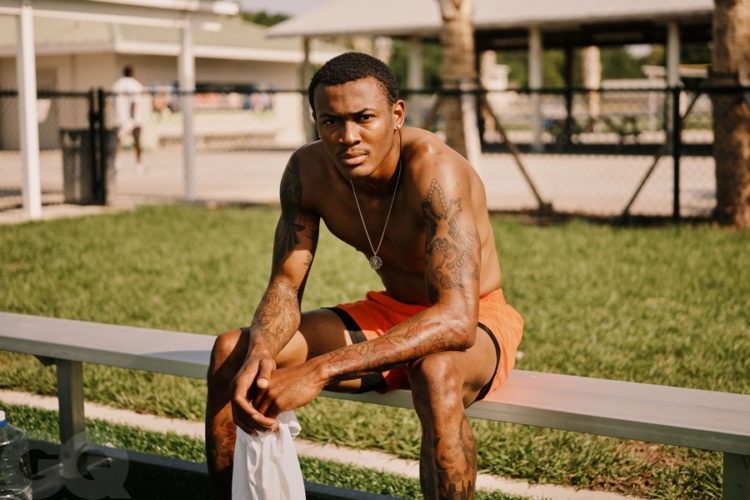 The Alabama receiver DeVonta Smith is selected as the tenth overall pick in the first round of the 2021 NFL Draft on Thursday. Here is what we know about DeVonta Smith. DeVonta Smith is a senior at Alabama in 2020 and he has over 1,800 yards with 23 touchdowns. He won Heisman Trophy for this achievement. He also got two College Football National Championships when he was in Alabama. Now he is twenty-three years old. Here find out more details about him and Devonta smith 40 time.

DeVonta Smith is from Amite City, Louisiana. From his childhood, he was interested in basketball and football. He attended Amite High Magnet School and then went to the University of Alabama. He played college football in the university.

Where did he get drafted?

DeVonta Smith is drafted to The Philadelphia Eagles. The team traded up with the Dallas Cowboys to move from No. 12 to No. 10. They wanted to select Smith in the first round of the 2022 draft. Then Smith signed a four-year rookie contract worth $20.1 million. In the first week when playing against the Falcons Smith scored the first touchdown of his career.

Further, Smith had a solid rookie year. He recorded 64 receptions for 916 yards and 5 touchdowns. The player’s 916 yards became the Eagle’s record for the most receiving yards in the season. Smith struggled during the wildcard round because of the team’s 31-15 loss against Tampa Bay Buccaneers. He ended the game with 4 catches for 60 yards.

What is DeVonta Smith 40 time?

In March, DeVonta Smith shared with the reporters that he will not take part in on-field drills at Alabama’s Pro Day. It includes the forty-year dash which means that Smith officially does not have Devonta smith 40 time. But in 2018 the players’ Smith and Henry Ruggs III had a friendly argument about who is faster. Smith shared that he will win a 40-yard dash and a 200-meter race. Ruggs declared that he will choose 100 meters.

His slender frame quickly became an afterthought and now the greatest Alabama WR of all time.

One time for Smitty.

It's not just Black History, it's Alabama football history 💪 pic.twitter.com/FiceNl06qo

His former teammates shared that Smith has clocked a time between 4.30 and 4.50 in the 40.

What is the height and weight of Smith?

Smith’s height is 6 ft 0 in and his weight is 77 kg. His weight is an issue in NFL because during the drafting process the teams debated if he can hold up in the games or not. The hand size of Smith is 9 3/8 inches and his arm length is 31.5 inches. DeVonta Smith is called the “Slim Reaper”. He earned his nickname at Alabama for his slim and athletic frame. He also has a consistent performance in his record-breaking college career.

What are the strengths of DeVonta Smith?

DeVonta is one of the youngest players in the NFL with lots of amazing skills. He has long relaxed strides and he is a fantastic route runner. His performances in the matches have received lots of praise from experts and the audience. He uses quick foot, forward lean, and shoulder rotation. He is a good hands catcher. His exceptional body control helps him to maintain his place in the game.

Smith has set the most Alabama single-game receiving touchdowns record. It took him only one half to do it. Also, he obliterated the previous record of three catches. It was held by many players and the last one was set by Washington NFL wide receiver ArDarius Stewart. Further Smith is considered a five-star recruit. His college football report was excellent. He was ranked five stars in Scout and 247Sports. He chose Alabama instead of LSU, Miami, Oklahoma, and TCU.

Who are Jalen Hurts and his association with Smith?

DeVonta Smith and Jalen Hurts played college football together in Alabama. They are good friends. But due to their careers, their pathways separated for some years. Now the pair has again reunited to play in Eagles in Philadelphia.

When people questioned Smith about Hurts, he responded quickly that the former teammate played an important role in his coming to Tuscaloosa.

When did he play Rock Paper Scissors?

DeVonta Smith played a Rock Paper Scissors game with Jerry Jeudy for route dibs. They played it during a match and it seems that Jerry won the game. It looked really interesting to see the players playing the simple game. This moment was captured in a video. Jerry Jeudy is a fellow wide receiver. Their little game was meant to decide who is going to run the route to catch a touchdown.

What is the net worth of DeVonta Smith?

DeVonta Smith is a great player. He has achieved several records at a young age. He is a phenomenal wide receiver, a good addition to the Eagles.

Also read: Technology in Sports: How Innovations Change The Game