What is The Easiest Way to Get Rid of An Old TV?

by Marie Miguel
in How To
Reading Time: 6 mins read
0 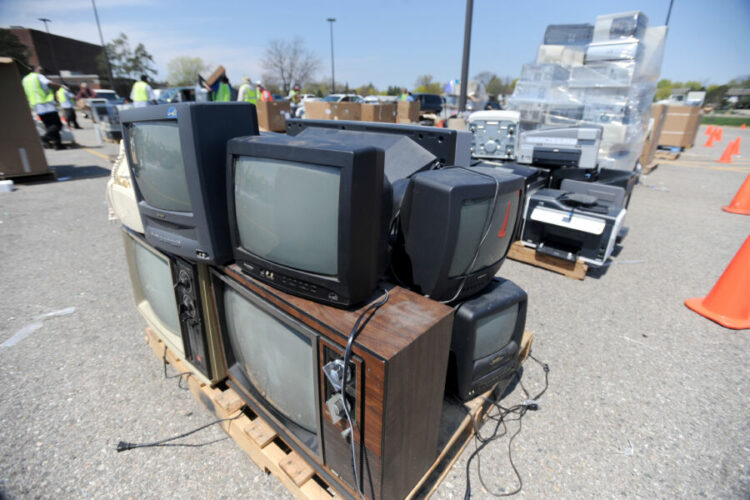 Finding the best way to recycle or properly dispose of electronics can seem complicated, but it’s essential. Even if you might go through several OLD TV in the lifetime, there is only one planet in the universe. There are much better ways to dispose of these complicated devices that have given you hours of comfort and joy than tossing them unceremoniously on the sidewalk. Regardless of whether you’ve recently replaced the old TV with a fancy new OLED or QLED TV or have a boxy CRT TV gathering dust in the basement or garage.

Here are a few of the quickest and safest ways how to get rid of an old TV.

You might consider giving old TV if it’s still functional. Look into the donation policies for thrift shops and charities in your area to see if they accept televisions. Different thrift shops and charities have different regulations. If so, ask if there is a pick-up service available. The fact that someone else is performing the labor-intensive work (literally) makes this one of the simplest methods for how to get rid of an old TV.

2. Check to see if the TV maker will accept it back

You might be able to return your old TV to the maker in some circumstances. It’s possible that some TV makers might like to reuse or repurpose some of the parts in your old television.

If you’re unsure whether your TV manufacturer offers this service, start by looking for information on their website. You can also give them a call to inquire about recycling. You might even receive credit from some manufacturers to use toward the purchase of a new product.

3. Sell it or provide it without charge

To let others know that your functional old TV is for sale or up for grabs, use social media, your neighborhood’s purchase Facebook group, Facebook Marketplace, a mass email to local family and friends, or another technique of your choice. Make it clear that the TV must be picked up at the house in order to make it as simple as feasible for you (or wherever is most convenient for you) to how to get rid of an old TV.

4. Take it to a recycling center for e-waste

You may find a nearby e-waste center where you can drop off old TV and other unwanted devices for recycling by conducting a fast web search of your area’s electronics disposal regulations. If there isn’t one in your city or county, inquire if the institutions in nearby communities that have them accept donations from non-residents.

5. Bring it to a community electronics disposal day

Suppose there isn’t an e-waste plant nearby. In that case, there might be designated days (sometimes a few each year) when locals can drop off electrical devices, including TVs, at fire or police stations or other public buildings for recycling. Once again, you may always see if nearby communities hold e-waste recycling events and, if so, whether non-citizens are permitted to participate.

6. Hold a garage or yard sale

Why not hold a traditional yard or garage sale if you need to get rid of certain things anyhow? There’s a fair possibility someone may want a functional TV if you still have one, especially if it’s a modern LED TV rather than a CRT. Furthermore, you might earn a few dollars.

The only catch is that you might have to provide proof that the old TV still functions. If necessary, you may connect the TV to an extension cord outside. Most TVs are fine to operate outside for a few hours, barring rain or snow. Additionally, you should look for the remote control and put some fresh batteries in it because you’ll be much more likely to sell it.

What exactly is hazardous TV waste?

Since the 1940s, Americans have been purchasing televisions. After bringing a new TV home, it can be challenging to get rid of the old TV. Many of us still recall the enormous television cabinets that were commonplace in homes during the 1960s and 1970s. Most of them appeared to occupy half of the wall in the living room!

And getting it out of the house required a minimum of two people when one of them died or Dad purchased a new set to replace it.

There was a tendency toward increasingly compact, portable systems as the 1980s arrived. Unfortunately, it was too simple to put one of them into the trash can when it died or replace it with a newer one. However, all those minuscule CRT devices still contained harmful, hazardous materials that could even injure someone if they exploded close to them.

America also started to amass hundreds of thousands of big computer monitors, which were essentially just specialized CRT devices, in the 1980s. And as people already mentioned, when it came to disposal, these created the same health and environmental issues.

The CRTs entry on Wikipedia states

It’s possible that older color and monochrome CRTs have phosphors made with harmful materials like cadmium. Modern CRTs’ rear glass tubes often include leaded glass, which poses a risk to the environment if it is disposed of inappropriately. By the time personal computers were manufactured, the glass in the front panel (the part of the CRT that is visible to the user) was made of barium rather than lead, even if the CRT’s back was still leaded glass.

Bromine, chlorine, arsenic, lead, and mercury may be present in more recent flat-screen televisions. It’s almost certain that your mobile device does. The point is that once the appliance or gadget containing these components is disposed of, poisonous compounds and elements like lead and mercury turn into hazardous waste products.

However, how to get rid of an old TV requires more effort than just tossing it in with the regular trash at the curb. Disposal procedures for electronics in general, including safe TV disposal, are crucial yet frequently ignored. Given that certain televisions contain toxic substances that might harm the environment, discarding them in the trash where they will wind up in a landfill is not advisable.

E-waste, commonly known as electronic garbage, is overflowing landfills. E-waste production is to be around 50 million metric tonnes a year. Deciding to dispose of your television in an approved way is a crucial step in helping to solve the e-waste issue facing our world.

How to Protect Your Data When Sending Files Online‍

How To Screenshot on Windows: The Different Methods To Do It