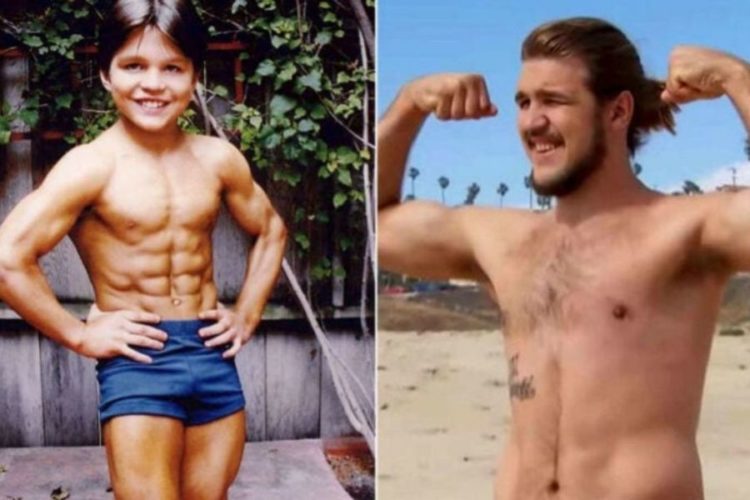 Have you heard about a boy called little Hercules? He is an internet sensation who became famous for having six-packs at a young age. At that time he was six years old. His name is Richard Sandrak. At eleven years he was able to lift three times his body weight. Many are wondering what he is doing now. He was called little Hercules twenty-one years before but today he is no longer interested in bodybuilding. He finds it boring. Here you can find all the details about Richard Sandrak bodybuilder.

What is Richard Sandrak doing now?

Sandrak is not lifting weights now. “No, I don’t lift weights. If anything it just got boring. I’m very proud of my past,” he shared in an interview. He did not like it when people thought of him as a freak of nature. But he has seen many kids who have the same physique as him. Rather than lift weights now Sandrak is staying fit with chin-ups. He is also riding his skateboard around Los Angeles.

In 2015 he started to work as a stuntman for Universal Studios’ Hollywood Waterworld. He set himself on fire and dived into the water which is a dangerous stunt. As part of his job, he set himself on fire five times a day. Then he dived into 50 feet of water. But he did all of this with a grin on his face. Many people alleged that the family used steroids to build his body but they passionately denied the claims.

Further, his father went to jail because of domestic abuse. It seems he bet his wife frequently. This incident made Sandrak leave bodybuilding for good. He changed his career. Sandrak also had a dream to become a Quantum scientist. He wanted to work for NASA.

Where is Sandrak (Little Hercules) from?

Richard Sandrak (Little Hercules) is from a small village in Ukraine. He was born on 15 April 1992. Now he is twenty-nine years old. His parents are Pavel Sandrak, a martial arts champion and Lena Sandrak an aerobics competitor. In 1994 he and his family moved to Pennsylvania where his parents thought Sandrak will have a good life. He started his training after he arrived in Pennsylvania. His father helped him to train in Taekwondo.

He introduced his son to many stretches and lightweight training. Then the family moved to California with the decision to make the fitness business big. They met the trainer Frank Giardina when they were touring his gym. They hired him to get publicity for their son.

Sandrak’s parents began his journey by training him in light exercises and martial arts. Then he soon progressed to bodybuilding. When he turned six he was able to lift 180 lb (82 kg) on the bench press. It helped him to claim the title of the world’s strongest boy. Many nicknamed him Little Hercules. When he turned eight he was bench-pressing 210 lb (95 kg).

Sandrak started to work with his father by doing 600 pushups and sit-ups a day. He dedicated all of his time to training. That is why he never got the time to play with his friends. He did not experience normal childhood like the other boys his age. His father put him on a strict diet so he was not able to eat junk foods or sweets.

After growing up he recalls that his father used to eat pizza in front of him. He was left to eat lettuce. His trainer shared that Sandrak was made to do intense exercises as a form of punishment if he made any mistake. But Sandrak stated that his father never forced him to do anything. He did everything by his own will. Mostly it was his choice because he joined his parents when they were training.

Because of his popularity, Sandrak traveled to many places. He participated in competitions, appeared in ads, posed in photoshoots for various magazines. The bodybuilder also appeared in shows like The Howard Stern Show. But as he grew older his appearances waned. He debuted in Hollywood with a 2009 film Little Hercules in 3D.

What happened to Little Hercules fame?

Sandrak’s trainer Giardina quit his job as he thought Pavel’s parenting was cruel. But Pavel tried to kill him. After that Pavel was imprisoned because of physically abusing his wife. Richard Sandrak was the one who called the police after his mother became injured because of the abuse. In 2007 Pavel was released from prison and was urged to undergo psychiatric guidance. Then he faced the possibility of deportation. Afterward, Lena Sandrak and Richard Sandrak left Pavel Sandrak.

A year later Sandrak appeared in a documentary titled The World’s Strongest Boy. In the video, he shared about his ability to do splits and bench-press. Many people said that steroids were involved in developing his muscles. But Richard and Lena denied the use of substances.

At the age of fifteen Sandrak continued to train many times a week. He also started to eat typical teenage food like Pizza. His live-in manager Marco Garcia assisted him to have a normal life. Then Sandrak acted in many movies and devoted his time to raising awareness against childhood obesity.

Then in 2015, Sandrak shared that he quit bodybuilding. He shared that he became bored after his father went to prison. Now he is doing cardio exercises such as chin-ups, stake boarding, and stair climbing.

What is the Little Hercules net worth?

Richard Sandrak experienced fame at a very young age. That is why he got bored of it soon. He earned money through promotions, acting, and more. Now his Little Hercules net worth is $100,000. He starred in the films like the Legends of Nethiah in 2012 and Assassin Priest. He also appeared in some of the episodes of Hogan Knows Best, Ripley’s Believe It or Not!, and Inside Edition. At the moment he is working as a stuntman in Universal Studios Hollywood.

Little Boy Hercules is a big boy now. Now he is enjoying his life by doing the things he loves.