Who was Gladys Presley? A Heartbreaking Story! 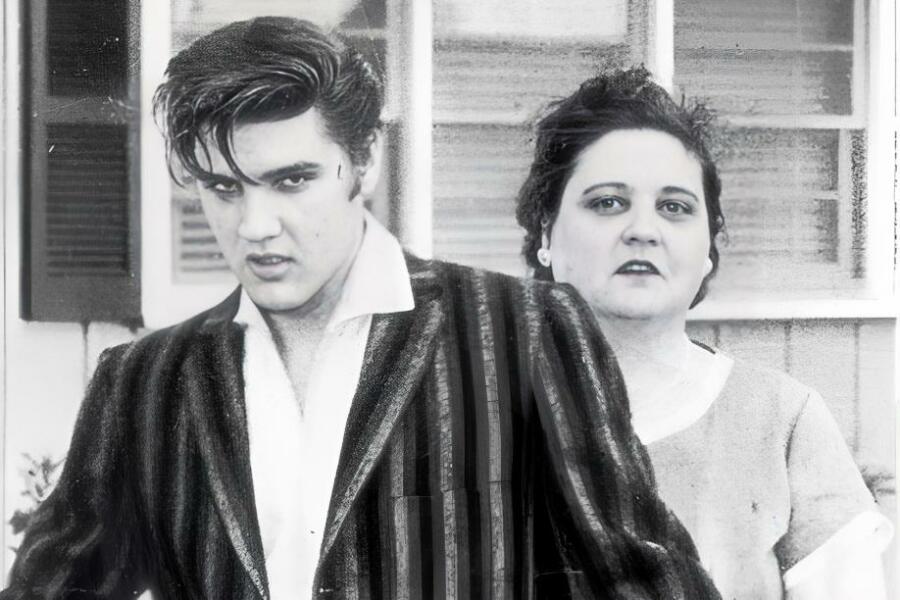 As an American superstar for a large portion of his career, Elvis Presley won the hearts of innumerable women. However, some say that the legendary crooner had nothing but affection for his mother, Gladys Presley.

Elvis’ relationship with Gladys was adorable. She lavished her ambitions and love on her only son, being both overly protective and adoring. However, she withered in the harsh light of the spotlight when he rose to fame and prosperity.

Elvis was utterly shattered by her sudden death in 1958 and predicted his own tragic passing nearly exactly 19 years later.

Gladys Presley and The Birth of Elvis

Gladys Presley, who was actually Gladys Love Smith when she was born on April 25, 1912, had a life far from the celebrity and wealth that her son would one day enjoy. She was born in Mississippi and grew up as a cotton farmer’s daughter.

Gladys met Vernon Presley at a church in the 1930s by coincidence. To get married in 1933, they lied about their ages. She was four years older than him and Vernon was 17 years old, which was not of legal age for marriage. Gladys soon became pregnant after the marriage.

However, tragedy struck when she was about to deliver the baby on January 8, 1935. Gladys gave birth to twins, but the first child, Jesse Garon Presley, died after delivery. Only Elvis Aaron Presley, the second boy, lived.

Gladys Presley raised Elvis close throughout his childhood—possibly disturbed by the death of his twin brother. Even as a young child, she carried him in a bag with her while she worked in the cotton fields.

Due to their extreme poverty, mother and son shared a bed far into Elvis’s adolescence and frequently called each other by different pet names, and talked to one another all the time in baby speak. Gladys Presley and her son got even closer after Vernon spent a brief period of time in jail in 1938 for forging a cheque.

Elvis claimed that he dedicated his mother’s song to the first one he ever made. To record “My Happiness” as a birthday present for Gladys in 1953, he traveled to Sun Studio in Memphis at the age of 18. That song served as a spark that eventually ignited into stardom.

The Down Phase of Gladys

Gladys, on the other hand, Elvis’s rise triggered Gladys’s fall. Even though Gladys was proud of her son, she found it difficult to deal with his celebrity status. Gladys was advised by Elvis’ handlers to cease feeding her hens on the lawn when neighbors at his Memphis house, Graceland, made fun of the way she washed her laundry outside.

She once called a buddy and said, “I wish we were poor again, I really do.” Gladys described herself to her relative as “the most wretched woman on Earth.”

Gladys Presley started drinking and taking diet pills as a result of her son’s stardom, which left her feeling depressed, alone, and confused. She was infected with hepatitis by 1958.

News of Elvis Presley’s mother’s illness surfaced in August 1958. Elvis, who was at the time stationed in Germany while serving in the American Army, made a hasty return trip to see her. He made it just in time. Gladys Presley passed away at 46 on August 14, 1958. Although a heart attack was the initial reason, it was later discovered that alcohol poisoning’s detrimental effects on the liver were also a factor.

Elvis cried nonstop during her funeral. “Goodbye, my love. At Gladys Presley’s tomb, the singer proclaimed, “We loved you. Oh my God, all I had gone. For you, I lived my entire life. I cherished you so much.

Following his mother’s funeral, Elvis could hardly walk. And many people who were close to him claimed that once Gladys passed away, Elvis changed forever, grieving her loss for years, and considering her in relation to pretty much everything he did.

On A Wrap: Elvis in Deep Shock

Elvis Presley’s mother had a significant presence in his life even after her passing. He talked endlessly about Gladys when he first met Priscilla, his future wife. It’s even thought that he noticed similarities between the two of them. Elvis’ mother was the real “love of his life,” according to Priscilla, who would subsequently make this remark.

While many people regarded his tight friendship with Gladys to be endearing, others questioned how “unusually” close they were. Even Elvis’s father Vernon, who was close to his son, seemed astounded by the deep bond between mother and son. Elvis would never forget it.

Even Elvis’ passing seemed to follow his mother in some strange manner. Elvis Presley passed away on August 16, 1977, just about 19 years to the day after he laid Gladys to rest.

Also read: Everything We Know About Elvis’ Father, Vernon Presley!