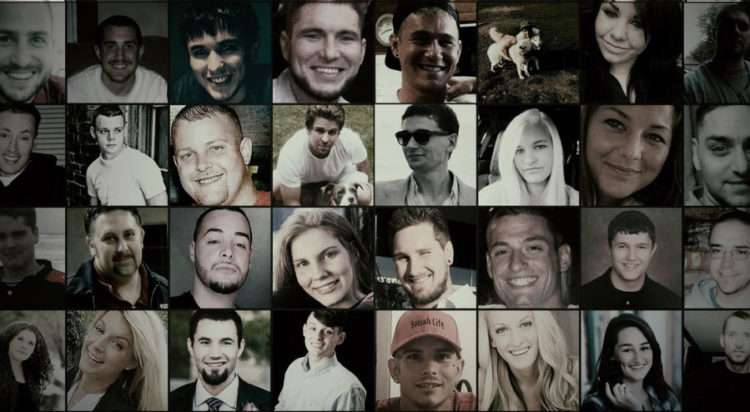 Starting from Marilyn Monroe to Heath Ledger, many stars have drowned in the world of darkness due to drug overdoses. The showbiz world might look too glamorous and perfect from the outside; however, it is not entirely so. There are many such aspects due to which we have lost some of our famous celebrities. Probably to escape from the world of pain and suffering, they used to drown themselves in drugs, not realizing that it could eventually lead to their death.

Prodigies like River Phoenix and Brad Renfro to pop culture fixtures like Marilyn Monroe, Heath Ledger, and many others have left behind their blazing legacies after their untimely deaths. In fact, these stars would indeed have long careers; however, their drug overdoses brought it to an end.

So would you like to know more about those famous stars who lost their lives due to drug overdoses? Stay with us until the end, as we will share some of the significant aspects of it here. Let us have a look!

Since you are reading this article, it is evident that you are curious to know more about all those celebrities who died after a drug overdose. Well, you are at the right place as we will share some of the significant issues here. Let us find out.

So when we lost the famous comic legend John Belushi due to a speedball overdose in 1982 at just 33 years old, his death scared a whole lot of people. In fact, it also caused a big exodus from drugs. However, the unhealthy use of substances continued to stalk Hollywood. You will be surprised to know that the legendary actor Robert Downey Jr. used to take drugs at one point in time. But he recovered soon after and came out of the addiction. Let us now look over some more names who fell prey to this dangerous addiction and lost their lives.

There are probably very few people who do not know who River Phoenix is. Well, with popular movies like “Stand by Me” and “My Own Private Idaho,” he became one of the most famous actors in the late 90s. In fact, he had also secured an Oscar nomination at 18 years of age for his role in “Running on Empty.”

As per the sources, Phoenix and his girlfriend Mathis were at The Viper Room in Hollywood on October 30, 1993. Mathis stated that she found Phoenix convulsing on the pavement outside the club. Even though Phoenix’s brother immediately called 911, they could not save him. Phoenix died of cocaine and heroin overdose at just 23 years of age.

One of the most shocking deaths in the Hollywood film industry was Heath Ledger’s death. In 2008, the 28-year-old exceptionally talented actor lost his life. In fact, in his final on-screen performance, he brought the DC Comics supervillain the Joker to life. Yes, it was in Christopher Nolan’s “The Dark Knight.” Moreover, Ledger also won a posthumous Oscar for being the best supporting actor.

Needless to say, Ledger has some of the most iconic films to his credit. However, on January 22nd, 2008, months after the release of “The Dark Knight,” the police found Ledger found dead at his New York apartment. This was due to an accidental overdose. The autopsy report showed the presence of multiple drugs in his blood.

The world was probably never as shocked by any celebrities death as it was due to the superstar Marilyn Monroe’s death. This iconic lady enjoyed a short career of about a decade in Hollywood. Starring in Hollywood classics like “The Seven Year Itch,” “Some Like It Hot,” and others made her instantly famous. She died due to drug overdoses.

Despite her stardom, Monroe had a troubled childhood. She initially began her career as a model and later on shifted to acting. However, later on, she began using drugs and alcohol. So on August 5th, 1962, the police found Monroe dead of an apparent overdose in her Los Angeles home. Her death is indeed shrouded in mystery.

Needless to say, people revered John Belushi highly on the American comedy scene. In fact, he was one of the original seven from NBC’s sketch comedy “Saturday Night Live.” Therefore, gaining success in the show with his friend and frequent collaborator Dan Aykroyd. Moreover, Belushi enjoyed spirited success through the 1970s, even as a persistent drug problem loomed in the background. Belushi “loved” what cocaine did to him.

Hollywood was rattled when Belushi died of an overdose on March 5, 1982, at 33 years old. The coroner’s report confirmed his death from intoxication resulting from cocaine and heroin. In fact, singer Cathy Smith also confessed to injecting Belushi with lethal substances. Therefore, it is still a mystery if this was a murder or simple drug overdose death.

Dana Plato was one of the most famous child actors from the 1970s and 80s who gained fame as Kimberly Drummond on the classic sitcom “Different Strokes.” The celebrity had multiple roles in television and film before success in “Different Strokes” in 1978.

However, she became addicted to drugs and alcohol as a teenager. In fact, she also suffered from a drug overdose when she was just 14 years. Plato was 34 when she died of an overdose on May 8, 1999, in Oklahoma.

Logan Williams is probably the youngest one on the list of deaths by drug overdose. He was just 16 years old when he passed away in 2020. People used to know this teen star for his television work, most prominently on the CW shows “The Flash” (as young Barry Allen) and “Supernatural.” Needless to say, Williams had a painfully short-lived screen career.

As per the sources, the young actor had started taking drugs when he was 13. However, on April 2, 2020, Williams passed away due to an accidental overdose of fentanyl, a powerful opioid pain reliever.

So as we conclude, we can say that it is not as easy to survive in the showbiz world as it might seem. There are a lot of aspects that might haunt you here constantly. Especially if you are facing a crisis in your career where you are not getting a lot of work, this can cause you to destroy your life with such addictions as drugs and alcohol. So, we can say drug overdoses. Therefore, if you know anyone near you going through this phase, make sure you help them out.