2020 Army-Navy Game is Going To Be Held This Year? 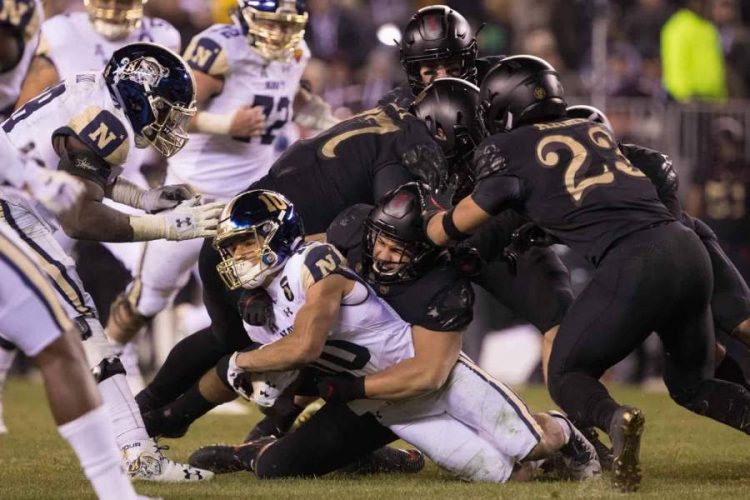 As the college football matches for this season are still in a state of indecision we do not know if the 2020 army navy games will happen or not. The army-navy teams do not know what the result will be. The games planned to happen on Dec. 12 at Philadelphia’s Lincoln Financial Field. But because of the COVID 19 situation, everything is uncertain now. Yet both of the teams are eager to take part in the games. They are confident that the games will happen this year without fail. Find all the details of the game here.

The history of the game

The game is in existence from 1930. The Army-Navy Game is a game between Army Black Knights and the Navy Midshipmen. It is one of the traditional games in college football. Most of the US presidents attend the game as it is one of the significant games in America. It gets televised on TV in channels like CBS, NBC, and ABC and always gets high ratings. The game conducted in many locations such as Chicago, California, New York area, and a few more.

The first game between Army-Navy held on November 29, 1890. Some players who played in the games have become professional players of football. For instance, the players like quarterback Roger Staubach and Alejandro Villanueva.

Navy Midshipman named Joseph Mason Reeves wore the first football helmet. He wore it during the 1893 game. As his doctor recommended him to prevent any injuries to his head, Reeves asked an Annapolis shoemaker to design a leather helmet for his use.

Although the matches between Army-Navy are friendly in nature the games can also turn intense. The people began to use phrases like “Beat Navy!” and “Beat Army!” which are popularly used to denote the competitive spirit. It is not only a competition but a service for the country. These phrases also included in informal letters between the teams.

There is also another well-known tradition in the game performed before the matches. It is the “prisoner exchange” a formal activity. The cadets are the prisoners and the midshipmen study in the sister academy. When the exchange is over both the teams enjoy a game with their companions.

The choirs in the United States Military Academy and United States Naval Academy sing the national anthem. A recording artist or a band does not sing the anthem which usually happens in the other football games. Then at the end of the game, the alma maters of the teams get performed. Moreover, the winning team will face the losing team to show mutual respect to each other. The alma mater of the winners gets played for which the phrase “to sing second” came into existence.

As the date and venue of the 2020 game planned earlier the tickets have sold out. The Navy AD Chet Gladchuk shared in the interview about the game. In the interview, he told that he is hopeful about the game as many are ready to watch it and the players are ready to play. But the only matter that can disrupt the game is the pandemic. He also shared that they are planning everything in detail if there is an unexpected scenario. So even if they could not accommodate many people they will refund the money. They are fully prepared to face all issues. So we can also hope that the rivalry will continue.

As the game has a rich history and tradition behind it many are waiting for it. But because of the COVID 19 pandemic, we do not know if it will happen or not. The Patriot League cancelled the fall sports because of the pandemic but Army-Navy Game may happen because many are positive about it. The conference decided to exclude this prestigious military game from the list of the games cancelled this year. Therefore, the Commander-in-Chief’s Trophy will get held at the time stated and that is on December 12. The game is now a priority on the list.

We have to wait to receive further news on the 2020 Army-Navy game. As the game is set to happen in Philadelphia the city has to give permission to make the game happen. The people who do not get the chance to watch the game in the stadium may have to see the televised game.