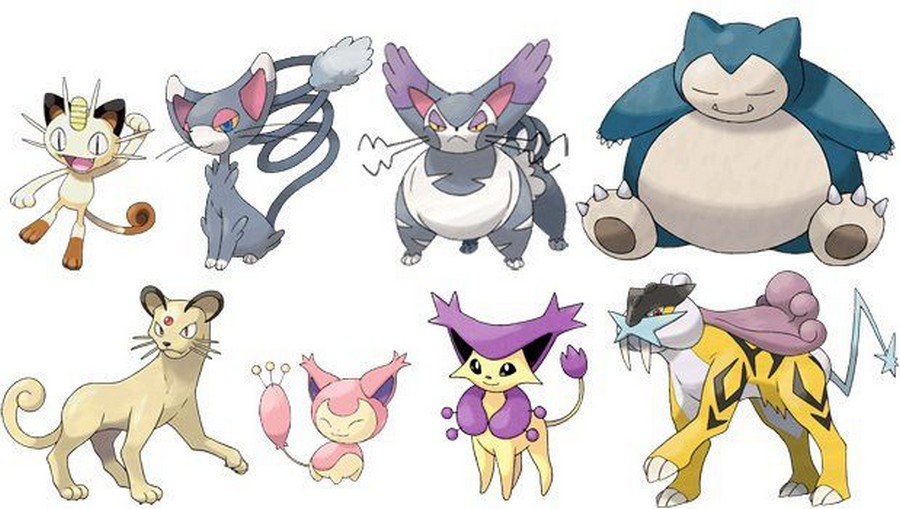 There are many cat-inspired Pokemon in the Pokedex. They are found in many areas in the Pokemon Universe. These Pokemon characters are loveable because they have the qualities of the cats. Besides they are also popular for their power and skill. But still, there is some variation between the types of cat Pokemon. Some types are strong while others are docile.

Cat Pokemon have sharp teeth and claws when we look beyond the cute factor. Plus they have large eyes, large ears, whiskers, and more. They are carnivorous too. Are you eager to know about the different types of cat Pokemon in the Pokedex? Then continue reading to know more.

The Persian cat breed is popular for its soft hair and cute eyes. There is also a Persian-type cat Pokemon that is well known for its adorable appearance. Meowth can evolve into a Persian. It is classified into classy cat and It is a large cat-like Pokemon that has Siamese cat features. It is a sleeker Pokemon that looks more elegant than Meowth. It can learn many moves and also has a vicious temperament. This cat Pokemon also has a fickle personality. It scratches things for no reason like a cat.

Meowth is one of the popular Pokemon in the Pokedex. It looks like a cat with big ears, whiskers, paws, tail, and retractable claws.  It is quick and more active at night. Further, it likes to sleep during the day like a cat. It loves to play and likes shiny items. The Meowth loves to tear things apart. That is why Meowth is known as the “Scratch Cat Pokemon”.  It is part of Team Rocket in the Pokemon.

Skitty is called the “Kitten Pokemon” because of its cat-like qualities. It is a super cute character that has a pink coat and pointy ears. It also always maintains a happy expression. That is why it has a big fan base. It has the power to make the other Pokemon get infatuated with it because of its cuteness.

Umbreon is a character that evolves from Eevee. Umbreon is a nighttime evolution while Espeon is a daytime evolution. Hence Umbreon is called the Moonlight Pokémon. This cat Pokemon has an elegant face. It is black and looks like a mix between cat, fox, and rabbit.

The face of Delcatty is cute, feminine, and loveable. This is an evolution of Skitty so it is called the Prim Pokemon. As the name suggests Delcatty has got many cat-like attributes. It likes to sleep, eat similar to a cat. It also likes to keep its fur coat in great condition.

The Purugly is a cat Pokemon that evolves from Glameow. It changes from a glam cat into an ugly one. Apart from this Purugly looks like a fat angry cat. But it has the power to resist fire and ice. It is not afraid to attack others and gets many treats from its owners.

If you want to look at a cat Pokemon that looks like a house cat then here is Glameow. It is a sweet and humorous cat that has white-tipped ears. Plus it has a white patch on its face, grey body, and four whiskers. On the whole, it looks like a Siamese cat. The trainers use the cat to enter Little Cup competitions. But Glameow is a very demanding cat. Sometimes it can be temperamental.

The Purrloin is a mischievous cat. It can walk on its hind legs and also on its four legs. The cat Pokemon has striking purple fur and doe-like eyes. Hence it looks loving. Many people get fooled by its charm but it is a dangerous cat. It has a masked look making it appear like a typical cat. One has to invest a lot of time to train Purrloin.

Espurr Pokemon can evolve into Meowstic. It is a cute Pokemon with large ears and a big tail. Further, the cat is powerful too. It also comes with physic powers that can prioritize attacks. Meowstic is considered a Constraint Pokemon.

Litten is called the Fire Cat Pokemon. It looks like a cute cat with cool red and black fur. The cat is aloof and is quite similar to a house cat. The Litten has large eyes, cute pointy ears, and more that make it similar to an ordinary cat.

Raikou comes under the category of big cat-type Pokemon. It is a legendary type Pokemon and looks like a Saber-tooth tiger. The cat Pokemon has 2 large fangs, a black face mask, and thick fur. Like many cats, this Pokemon does not trust humans.

Shinx is a cat Pokemon that evolves into Luxio. It is a brave and powerful cat Pokemon. It has a black mane. Hence it looks scary and intimidating. Sometimes it can cause fainting because of its electrical discharge. Luxio is a spark Pokemon that looks like a cat on business.

Litten can evolve into a Torracat. It is a large cat that is ready for action. Also, it enjoys fighting and also spits fire. But Torra cats can become spoilt in hands of a bad trainer. If trained properly they are great in battle. The cat Pokemon has a red and black coat style with yellow eyes. It also has a yellow bell around its neck that serves as a flame sac.

Shinx is called the flash Pokemon. It looks like a cute lion cub. Like a cat, it has large round ears and big eyes. Further, it also has a black collar that develops into Main. But overall it is a scaredy-cat. It only uses the flash ability if it feels threatened.

Luxray is a final evolution of Luxio. It is the toughest Pokemon of the three. It has a full black mane with fierce eyes and a slender build. Further, this Pokemon is considered the Gleam Eyes Pokemon. With this, it has the power to see anything with the x-ray type vision. If Shinx is a lion cub then Luxray is a grown adult.

It is called the Lion Cub Pokemon. Litleo is an adorable cat with round ears. It is a cute Mohican with a clump of fur. It is a fire-type Pokemon that is playful and curious. The male Litleo can evolve into a maned Pyroar. On the other hand, the female turns into Pyroar without a mane.

Incineroar is a final stage after Torracat in the Litten family of Pokemon species. It is called the Heel Pokemon. This cat can stand on its hind legs like a human. It looks like a pro wrestler. Besides, it looks fiery, strong, and tough. Many trainers think that Incineroar is selfish so it ignores its orders. More than a cat it looks like a big cat tiger.

Eevee is a Pokemon that can evolve into different types of cat Pokemon. Eevee is a mix of many animals but predominantly it looks like a cat. It has cute eyes with pointy ears. This cat from Pokemon is not fit for a fight. But there are eight different Eevee solutions to choose from.

It is one of the evolutions of Eevee that arrives after using Thunder stone. It is called the lightening Pokemon. It can absorb volts. Further, it is a cat Pokemon with large pointy ears, purple eyes, sticky-up electrified fur, and more. But Jolteon is not a house cat as it is a great sweeper.

Vaporeon is a “Bubble Jet Pokemon”. It is one of the evolutions of Eevee using water stone. It is a cat-like water-type Pokemon. That is why often the sailors mistake it for a mermaid. This Pokemon looks like both an aquatic animal and a cat. Some of its qualities that make it feline are short muzzle and triangular nose. But unlike many cats Vaporeon loves water.

Flareon can evolve from Eevee after using the firestone. It is known as the Flame Pokemon and it creates fire. The body temperature of Flareon can reach 1,700 degrees F.  The cat-like Pokemon is a good companion for people who love the outdoors, hiking, and camping.

Snorlax is a cute cat that is the size of a cat. It is called the sleeping Pokemon. The normal day for Snorlax is eating and sleeping. They are docile and behave like lazy house cats. They are active during dusk and like to live in the mountains.

Mew is one of the rare Pokemon in the Pokemon universe. It is known as the “New Species Pokemon”. The DNA of Mew has the genetic codes of all Pokemon. This makes it the ancestor of Pokemon. This cat Pokemon is intelligent and playful. It is pink in color with a cat-like appearance. It has psychic abilities too.

This cat Pokemon looks like a cat as well as a weasel.  It is a “Sharp Claw Pokemon”. Hence it is known as a vicious predator and steals the eggs of unguarded Pidgey nests. The Sneasel is cunning, accurate, and fast.

The Entei is a volcano cat and is one of the Gen 2 legendary beasts. This cat Pokemon is elusive and can be caught only once in the game. The Entei has lion-like features too. It has the heart of the big cat lion as it is powerful.

Suicune looks like the feline leopard. It has a lot of power and has a slender build. Many trainers use this cat Pokemon for battle. But this Pokemon is hard to catch eventhough many desire to possess it.

Zangoose is considered the Cat Ferret Pokemon. The trainers do not think of it as a pure cat Pokemon. But its feline features make it a cat from Pokemon. Its attack does not cause that much damage.

This cat Pokemon is called the disaster Pokemon. It looks like a snow leopard and lives in the mountains.

This is a cat-like Pokemon that has teal-colored fur, pointy ears, and clawed paws. It likes to eat and travels to find sustenance for survival.

It is a later generation evolution of the Eevee Pokemon. It is called the Verdant Pokemon. It provides a great defense against attacks but it is not effective in attacking. The Leafeon also purifies the air.

This is one of the best evolutions of Eevee. It looks like a cat. The Pokemon lives in cold weather and provides ranges of attack. It appears docile and calm.

It is known as the Thunderclap Pokemon. It has abilities like speed and power. It can inflict a lot of damage. The Pokemon looks like a fierce cat. It releases electrical energy so not the best Pokemon to be around.

Skitty is a playful Pokemon that looks like a cat. It gets fascinated by many objects like cats. It also chases after its tail.

This cat-like Pokemon is called a steel Pokemon. It is known as the Viking Pokémon. It is the evolution of Galarian Meowth. The Pokemon has good battle armor and tough claws.

Solgaleo is a cat Pokemon that creates Ultra Wormhole. The wormhole is used by the life forms and energy to travel to other planets. It has a full metal body. Its weaknesses are dark, ground, and ghosts.

This cat-like Pokemon was released in Sun and Moon. It has eyes and ears similar to a cat. It can also stand on hind legs. This Pokemon is well known for its intelligence.

This is another cat Pokemon that walks on both legs. It has the features of a cat with psychic abilities.

These are the thirty-eight Pokemon species that look like a cat. You can find them in the Pokedex. Some are rare Pokemon while others are powerful.