90 Day Fiance Couples That are Still Together 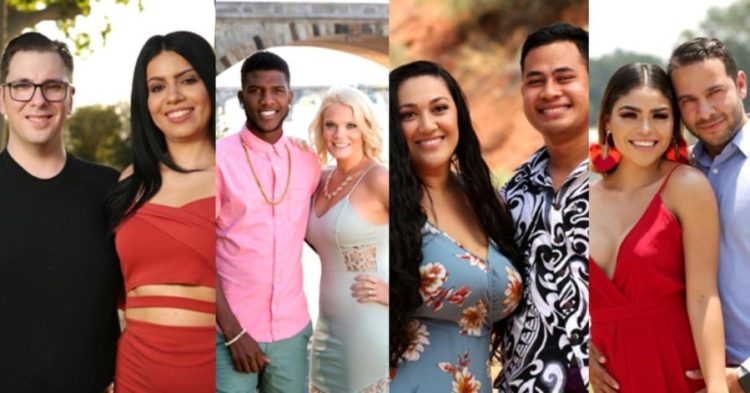 The TLC reality series 90 Day Fiance has been captivating its audiences since its premiere in 2014. Therefore, it has achieved much success throughout the years. Moreover, this show has become a platform for people who are looking for long-lasting love. Recently, the show has wrapped up its eighth season. So, what’s this show all about you may ask. This expansive and ever-growing show chronicles the life of couples who have applied for k-1 visas and must get married within 90 days.

Through this show, dating across the borders has become possible. While many of them went through some tough times after their initial marriage and ended up taking a divorce, there are also couples, who have found a means to stay together. So, in this article, we will discuss those couples who are still going strong, together.

Love is truly in the air, as a lot of couples from the 90 days fiance are still together. So, if you are a fan of the show, you’d surely know these names. So, without further ado, let’s take a look at some of the couples now.

First, on the list of successful 90 days fiance couples, we have Alan and Kirlyam. So, it’s interesting that Alan met Kirlyan on a Mormon mission in Brazil. Moreover, Alan is an American, who’s from Los Angeles. Currently, they also share a child, Liam. Moreover, they are currently living in North Carolina.

Next, we have the couple from 90 days fiance, Mike & Aziza. So, Mike met her on a dating site. Therefore, mike’s family from Cleveland were skeptical of their son’s fiance, who was pretty much younger than him. However, they are in better peace of mind now. Currently, the duo is married and also welcomed their baby daughter Olivia in 2019.

On the third list, we have the guy from Oklahoma, Russ who fell in love with Paola during a Colombia trip, years ago. Eventually, they found the recipe of love in each other. So, what are these 90 Day Fiancé couples now doing?

Well, in the TLC spinoff series ‘Happily Even After’ Paola expressed her desire to move to Miami and pursue a career in modeling and personal trainer. Currently, they are in Florida and also have welcomed their son, Axel.

In the second season of the show 90-day fiance, we saw this couple. Brett is from Washington and Daya from Philipines. Even though they faced a few family problems, eventually they settled together. Currently, they are quite happy, and also welcomed a baby daughter Isabelle in 2017.

This duo also has an interesting story to tell. So, this duo met at a hot dog stand in Columbia and hit it off from there. Currently, they have tied knots and living together, happily. Moreover, they also share a child as well.

The list of 90 day fiance couples still together won’t be complete without mentioning these lovebirds from season 2. So, they met on a study trip, which was like a blessing for them. Currently, they are living in Texas with their son, Jedidah, who’s just five years old. In fact, they also share a daughter, who’s 3 years old, Anna. furthermore, Amy is also expecting a third child, soon.

The 90-day fiance show moved on to the 3rd season, and we saw a lot of couples in there. So, there was a controversial couple, Mark & Nikki, who are possibly together. There’s no confirmation since they aren’t active on social media. However, fans said that the couples are still together.

Next, we have the couple from 90-day fiance Carolina and Fernando from season 3. Fernando, who is from Florida met the love of his life Carolina, who is from Colombia. They met on a trip to Columbia, and since then, they have started dating. Currently, they are still together, and also have a child.

So, next, we have another couple from season 3 of the show, who are still together. This duo met on the social media site, Facebook, and since then, have shared a wonderful time together.

We have another couple from the s3, in Loren and Alexei. It’s worth mentioning that Alexei met Loren on an Israel trip. They are not only happy together, but also have a baby boy as well.

So, next, we have on our list are these guys, they are a pretty sweet Russian-American couple who has managed to capture the hearts of the audiences. So, the couple also has children now.

The third season had a lot of contestants who made it big. So, Melaine met Devar on a visit to Jamaica. Since then, they have shared a happy time together. Currently, they are also blessed with a baby daughter, Avia.

In the fourth season, we have Nicole and azan. Despite initial struggles, they remained together. It’s true that their journey wasn’t smooth. However, fighting all odds, the couples are believed to be living together.

Next on the list, we have the Nigerian-American couple. They met on a dating service and hit it off straight away. Currently, they are living in the US where they have welcomed their first child.

So, in the fourth season, we have had a lot of successful couples. One of them is Matt and Alla. in the 90-day fiance TLC show, we saw how they quickly fell for each other and also became fan favorites. So, currently, they are still happy and going strongly together. Moreover, they have also welcomed their sweet baby daughter Emmalyn.

You may also like: 7 Power Couples Of Bollywood Who Will Make You Fall In Love Again

This duo is also one of the 90 day fiance couples of season 4, who are going strong. They are not only happily married but also have their own spin-off show as well. Though there were a few family issues between the two, things are alright now.

Moving on to season five, we have the beautiful couple Elizabeth and Andrei.  Despite their past struggles, the fans witnessed how their love story worked out. They had an outdoor wedding and also welcomed their baby daughter in 2019. Currently, they are really happy together, as a family of three.

Next, we have the couple who had a lot of initial struggles. However, the fan-favorite couples of season five are not only together but also enjoying much happiness and prosperity. Moreover, the 90 Day Fiance couple has now settled onto a pretty good career for themselves as well.

Love is truly in the air for Evelyn and David from S5, as they are still happy together. In fact, they have also seen success in their individual TV endeavours, outside the franchise. For example, Evelyn went to the peak of success by securing a top 14 spot in American Idol in 2019.

In season 5, we had another successful couple, Josh and Aika. Josh the man from Arizona saw love in her beautiful Filipina wife, Aika, in L.A. Currently, they are pretty happy together and in love. However, there’s no info about them having any child yet.

Despite a few controversies, they have found love in each other. In fact, the couples faced a backlash from the fans for treating Eric’s daughter harshly. There was also the involvement of the cops as well. However, things seem to have settled down, and they doing better than before.

In the sixth season of 90 Day fiance, we saw these couples who are also one of the fan favorites. Currently, they are pretty happy with their two sons. So, it’s really cool how they have found love in each other and doing well.

So, we have another couple from the sixth season of the show who have embraced their love for each other. It’s really sweet as they had a happy ending at the end of the show. Moreover, they are also a family of three now, as they are blessed with a son.

Anna who is from Nebraska fell in love with Mursel from Turkey. Currently, they are pretty happy to share a wonderful life together. In fact, they tied knots when Mursel was in the U.S on his k-1 Visa.

Next, we have another one of those beautiful couples from 90 Day Fiance 7th season, Blake and Jasmin. So, fans probably remember the man from California and his Finnish wife. It’s true that they have found the secret of love in each other.

Though there was an age difference between the two, that didn’t stop these couples from forming a bond. The American guy with his Brazillian has defied the critics and is pretty happy together.

It’s true that they were part of initial hiccups, but that seems to have been taken care of. Tania and Syngin share an awesome bond, and that’s why they are still together.

Here’s another couple, who got a happy ending in the show. In fact, they have overcome some familial drama and went on to lead a happy life together. Currently, they have also welcomed their baby girl Brenda in 2020.

It’s beyond doubt that these couples are fan favorites in the 90 Day Fiance show’s seventh edition. Moreover, they have also featured in the eighth edition as well. Currently, they are in the 8th season, and we are seeing the progression of their love story.

So, the final 90 Day Fiance couple on our list has to be Angela and Michael, from the 7th season. As a couple, they are pretty happy to have found a successful life together. Moreover. They have celebrated their first anniversary on Jan 27 as well.

So, these were a few couples from the 90 Day Fiance TLC show who have found the secret of love. It’s really beautiful how far they have come and are living peacefully.

You may also like: Where Are ‘Married at First Sight’ Couples?