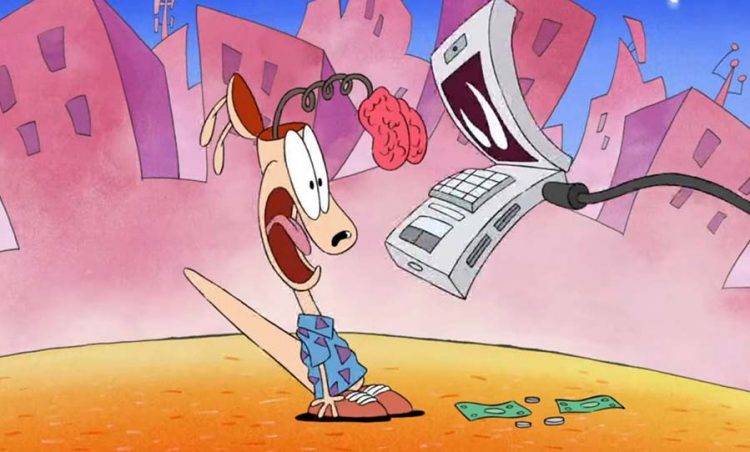 90s cartoons are the highlight of the 90s kid’s generation. Many wonderful memories surround animated cartoons & 90s cartoons characters. Do you remember the time when we came from school, hurriedly put on our casual clothes, told mom to bring the snacks and watch those awesome classic 90s shows? Thinking about those golden times brings us a wave of nostalgia. If you have forgotten some of the old cartoon shows, we have listed out the name and information about them for you.

These will revive your memory and bring you back the memories stored safely in your brain. Enjoy reading about it here.

Who can forget one of the exciting 90s cartoons The Powerpuff Girls? This is the cartoon that made the Cartoon Network channel famous. It is about three courageous girls with different temperament who fight bad guys. Also, it is one of the animated cartoons that showed the world the significance of girl power.

90s Kids sure love X-Men. But we are more acquainted with the animated X-men series. Undoubtedly it is the favourite series of 90s geeks. There are human, extra-terrestrial and mutants in the gang of X-Men who fight bad guys. That is why many 90s kids are rewatching it now.

The Animaniacs is a funny animated series created by Steven Spielberg and Warner Bros. It is about the exploits of three wackadoodle characters named Yakko, Wakko and Dot. But mostly this animated show helped us to know lots of stuff about Presidents and other famous personalities.

Duck Tales is another funny 90s cartoon. It is the story of our favourite Donald Duck who looks after his nephews Huey, Dewey, and Louie. He gets caught in many adventures because of his nephews who warm up to him gradually.

Dexter is a boy genius who is the favourite of many 90s kids. He hides a secret laboratory in his home where he invents and experiments. How can we forget mentioning his hyperactive sister Dee Dee? She is the one who enters the laboratory of Dexter and wreaks havoc in it.

Recess is a story of six fourth-graders who enjoy their life. This 90s cartoon is one of the popular ones on television. Also, it taught us many things about individuality and social order. So it was more than just a cartoon. This is one of the examples of quality 90s animated series.

This series was also a major part of the childhood of our 90s generation. The story is set in New York City where the Teenage Mutant Ninja Turtles reside. They use their excellent ninja skills to fight Shredder, Krang and also other villains. Did you collect the action figures of Ninja Turtles? Then you have enjoyed your childhood well.

The Tiny Toon Adventures is a cartoon created by Warner Bros. Animation and Steven Spielberg. The story is set in the town of “Acme Acres” where the Tiny Toons and Looney Tunes reside. Moreover, there are Bugs Bunny, Daffy Duck, Porky Pig and more in the series.

This is an American Sitcom that satirised American life. It was one of the popular TV shows of the 90s generation. Also, the series is well known for its future predictions that have become famous memes now. The Simpson family go through lots of mishaps in their life that made our childhood fun.

This is an American-Canadian series based on a book. It is about the adventures of Miss Frizzle with her class who experience lots of adventures together. Furthermore, each episode of the series has an amazing plot and also lots of things to learn.

This is an animated series created by Stephen Hillenburg for Nickelodeon. It is one of the award-winning series of the channel. Moreover, it is now famous because of meme contents and reboots. It is set in the underwater fictional city of Bikini Bottom. The underwater creatures of the sea are the main characters. You will certainly be aware of the characters SpongeBob, Patrick, and Squidward.

90s kids love Batman: The Animated Series. There was lots of complexity in this series that many could only understand after they grew up. But it was one of the best 90s cartoons series of our generation. Also, this series depicted the life of Batman well.

13. He-Man and the Masters of the Universe

This cartoon had action, adventure and more. The series is set in a fictional place called Eternia where Prince Adam lives. He was our childhood superhero. Also, he has the power of a sword that transforms him onto He-Man. Moreover, who could forget the creepy villain of the series Skeletor?

The series is about an anthropomorphic dog who resides with an elderly couple. He comes across lots of paranormal or supernatural-type experiences. It is now quite scary to think that our generation has watched this comedy-horror series.

This is also one of the unforgettable 90s cartoons. The show is about an adolescent boy named Douglas “Doug” Funnie who comes across problems in his school. Also, this show taught us a lot about school life such as romance, bullying, self-esteem and more.

Pokemon is one of the best 90s cartoons which is popular even today. It opened our eyes to a world filled with dazzling creatures. If your kid is a big Pokemon fan, he/she might enjoy playing Pokemon trading card games. Pokemon cards in Toronto have recently gained huge popularity among kids. You may easily get them from any kids play store or even online.

The handsome guy of the 90s kids is Johnny Bravo. He is a guy who tries to impress a woman but his plans never succeed. Moreover, each episode in this series is full of fun and humour. That is why many people love it.

Arthur is a feel-good series of our childhood. It is an educational series about Arthur Read an eight-year-old anthropomorphic aardvark. Furthermore, he and his friends learn life lessons.

This is one of the hallmark series of the 90s generation. All the short episodes of Tom and Jerry gave us wonderful memories. Moreover, the fight between them was our sole enjoyment.

It is one of the popular Disney Channel shows. We got to see all the famous characters of Disney appear in this series such as Louie the ape, Baloo the Bear, Sher khan the Tiger and more.

The animated Aladdin series was one of the best 90s kids cartoons. The adventures of Aladdin, Genie and Jasmine made our life interesting. Additionally, we got to learn more about the fairy tale characters through the series.

22. The New Adventures of Winnie the Pooh

This was one of the sweet and adorable series on The Disney Channel. The main characters in the series like Christopher Robin, Pooh, Tigger, Piglet, and Rabbit taught us a lot about life.

Hakuna Matata! This series taught us a philosophy in life with just this one word. Timon and Pumbaa are the side characters in Lion King Movie. But because of their interesting characteristics, they got a series of their own.

This was another DC animated series that made our childhood an enjoyable time. We got to see the amazing life of Superman who uses his disguise as Clark to hide his superhero identity.

Sabrina the teenage witch series was less dark and more humorous in the 90s. That is why it is was one of the feel-good shows. Moreover, all the episodes in the series show us how Sabrina learns from her mistakes.

Sonic is one of the favourite characters of the 90s kids. He is fast so he uses his powers to help people. Also, the story is now a cult-hit. There are lots of reboots available but nothing can come near the original.

We can never forget the creepy yet intelligent Addams Family. Now there are a number of The Addams Family series and movies available. But the 90s series never had the macabre nature of the family because the creators did not want to frighten the children.

This is another sweet 90s cartoon show that captured the hearts of viewers. The late Christopher Plummer served as the narrator for the series. Madeline is a troublesome girl who gets caught in problems but she is an adorable girl.

29. Where in the World is Carmen Sandiego?

This is one of the best mystery cartoon shows of the 90s generation. It is a game show where the contestants have to find Carmen Sandiego. She is a famous international thief who is hard to find.

It is a famous British show about a gentle and well-mannered train called Thomas. The daily adventures of Thomas and his friends are the main plot of the series. That is why it is one of the memorable 90s cartoons.

Hey, Arnold is a comedy series about a kid named Arnold. He lives with his grandparents. Furthermore, the main plot of this 90s show is about Arnold’s urban life problems and how he manages to fix them.

This anime was also the best part of the 90s kid’s life. We got to see the amazing adventures of Son Goku who defends the earth along with his companions from villains.

The Godzilla series was a very interesting watch. It showed us lots of details that were never shown in movies. That is why it was one of the best 90s kids cartoons.

Pinky and the Brain is a well-known animated series. The story is about genetically engineered mice who reside in Acme Labs research facility. Both Pinky and Brain are entertaining characters.

CatDog is a well-known 90s Nickelodeon series. It is about the conjoined brothers a cat and a dog. They both have different characteristics that put them in trouble. But they are best friends at the end of the day.

These are the 35 animated TV shows of the 90s generation. These 90s cartoons have given us lots of good memories. So we can treasure them always.