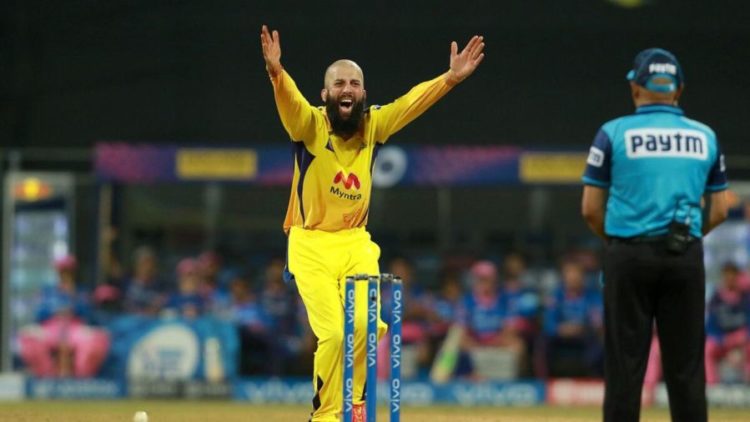 IPL matches are something that people of all ages enjoy watching. Especially when their favorite team plays, the craze is at a different level. Over the years, this tournament has become close to our hearts. Chennai Super Kings have always won our hearts with their impressive performances. Be it Captain Cool or his other teammates; they have never disappointed their fans.

So when we got to see Moen Ali’s great bowling, it did not surprise us much. In fact, Aakash Chopra also highlighted his three-wicket haul in Sunday’s match. Let us find out more about it!

What were Aakash Chopra’s Comments on Moen Ali’s Bowling?

If you have watched Sunday’s match, you must have seen how Moen Ali’s bowling sealed the match in the Chennai Super Kings’ favor. In fact, Ali’s 3/13 in his four overs help dismiss Delhi Capitals in 117 to pursue a 209 target. So the CSK off-spinner’s dismissal of the top order batsmen like Mitchell Marsh, Rishabh Pant, and Ripal Patel made the game easier for CSK to win the match.

You demolished the opposition, the heart and the heartbeat, everything finished.

In fact, none of the Delhi Capital’s batsmen could bat steadily on that day. Delhi Capitals had lost Warner’s wicket right at the start at Theekshana’s bowling. It was after him that Simarjeet’s ball took Kona Bharat as well. However, Mitchell and Rishabh Pant were playing very well, but with Moen Ali there, both of them and then Ripal, “he just finished it, game dusted, sealed, delivered.”

Many of you who watch IPL matches regularly will know that Aakash Chopra is one of the most popular commentators. However, unlike some, he never expresses his views about a match tauntingly; instead, he is always pretty blunt.

So in Sunday’s match between Delhi Capitals and Chennai Super Kings, Aakash was quite disappointed with how the players of DC played. The team had lost by a huge margin of 91 runs, similar to an innings defeat. According to Chopra, the Delhi skipper, Rishabh Pant, might be playing really well; however, the way he is getting out is indeed very disappointing.

Chopra ended his post by stating that the DC is presently overly dependent on David Warner and Rovman Powell in the batting department. Therefore, whenever they cannot play well, the others cannot take the match forward single-handedly. Moreover, the bowling is also not up to the mark, creating problems for the team to control the runs.

Also Read: Getting The Most from Player Stats in Fantasy Football