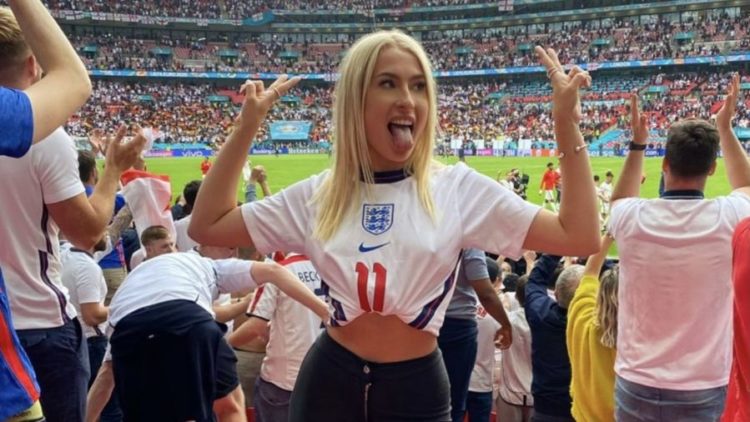 Astrid Wett is a known face on YouTube. People are aware of her love of football. We also know that she is a mad fan of Chelsea. In fact, she had been vocal enough about it. Football has given us some really crazy fan moments. YouTube is full of compilations of the crazy fan moments from football. In fact, the game of football is such a passionate one that this passion gets contagious at times, affecting the fans. However, at times, some fans get so much crazy that they do some really strange things. Chelsea seems to have found such a crazy fan in Astrid.

Astrid Wett is the self-proclaimed ‘queen of TikTok’. On TikTok, she has amassed 13 million likes. This number, therefore, speaks for her popularity. However, Astrid has yet another identity. She is an OnlyFans star. She is preparing to fight fellow OnlyFans star, Elle Brooke in the boxing ring this July. Astrid recently stated that she would upload four of her videos on Po*nHub if Chelsea wins the FA Cup this year! Well, does it sound crazy enough? Perhaps the Chelsea fans had some more reason to cheer for their club’s victory!

Read the article to know more about this.

What Astrid Wett Did?

Chelsea had a great run this season. Under the guidance of Thomas Tuchel, the Blues have won the Super Cup and Club World Cup. In the Premier League, they have finished third. Therefore, they have also secured a place in the upcoming Champions League. Moreover, they managed to reach the finale of the FA Cup. Winning the FA Cup would have seen them finishing the season with three trophies in their cabinet along with a UCL spot. Therefore, the fans were super excited for the final. Astrid Wett being a crazy Chelsea fan showed no exception to this. She seems super excited.

Recently she uploaded a TikTok video, where she is seen in a sports bra and lime green mini skirt. In that video clip, Astrid Wett jumped up and down, clapping her hands and saying that the ‘5th video might be on its way’ if Chelsea wins the FA Cup. In fact, her other adult films uploaded after Chelsea’s victories have already reached a whopping 10 million views. The latest of those videos got published when Chelsea became World Club Cup champions this year.

Earlier, in the previous season, after Chelsea’s Champions League triumph and Super Cup wins, Astrid Wett also uploaded her videos on the po*nographic website. Thus, when Thomas Tuchel’s men walked out onto the Wembley Stadium against Liverpool, Astrid fans prayed for Chelsea’s victory.

Was The Wait Fruitful?

As the Chelsea players took to the field in the FA Cup Final against Liverpool, all the Astrid fans prayed for the Blues’ victory. The game was a tight one. The scores were level even at the end of the extra time. The match thus crawled to the penalty shootouts. At the end of 5 shots, the score was 4 – 4. Mason Mount for Chelsea missed the sixth shot and Konstantinos Tsimikas sealed Liverpool’s victory with a decisive goal.

Astrid Wett hinted at uploading a new adult video if Chelsea had won the FA cup. However, her statement received some negative feedback. In the comments below her video, someone wrote a statement asking Liverpool to stop her from posting the video. Many others jokingly remarked that as Chelsea fans they did have enough of Astrid’s videos and asked her to leave the fan base.

Yet some others went further by claiming that Astrid will not be able to post the video as Liverpool will be beating Chelsea. Well, these fans seem to have good foresight as they predicted the results beforehand. They might feel sad that they didn’t monetize their prediction skills!

Also Read: What are The Aims for Manchester United Now?