Band Saw Vs. Scroll Saw: Which is the Best for Your Needs? 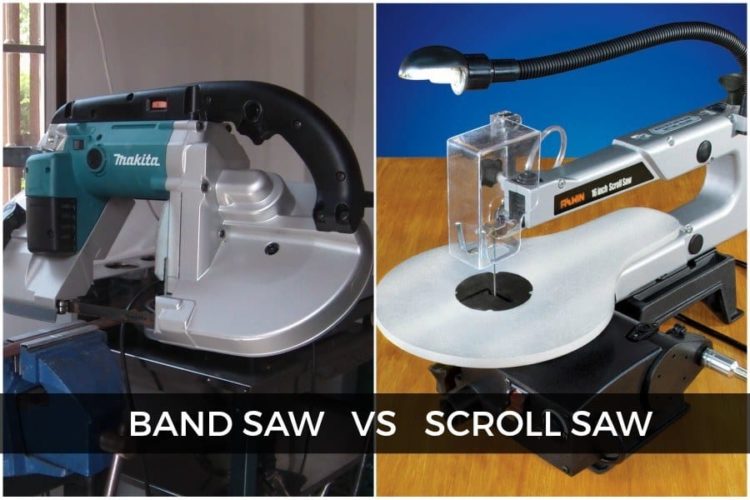 A Band Saw and a Scroll Saw both perform the same function of sawing but they are needed for different cutting needs. People have this doubt about which saw is best for their woodworking needs. It depends on various factors that we are going to discuss in this article.

A Scroll Saw is a normal sawing machine that is used for doing intricate works on woods and other similar materials. To get much accuracy while cutting the wood, you need to use this type of saw. Thus, the saw is best to carry out small projects. With great accuracy and speed, you can cut the wood materials easily with the power of an electric scroll saw.

Not only for wood, but one can also use this scroll saw to cut thin metals, plastics, and plexiglass. To make inside cuts, the scroll saw comes as a perfect option, as it will help you to cut in a detailed way.

Coming to the design of the scroll saw, it has a small worktable where you can place the materials to be cut. Then, the saw uses thin and short blades for effective cutting tools and such blades will move both in an up and down direction. Here the variable speed knob or pedal is used to control the speed and the saw is run by electricity.

This is somewhat more powerful than the Scroll Saw, as it will even cut the metal when used with the right blade. But this saw is mostly used to cut wood materials. For starters, this saw seems to be larger and heavier to work with it. A band saw has a blade that rotates on the band. This is in contrast to the up and down movement of the blade in the scroll saw.

Here the blades are much thicker and hence durable than a scroll saw blade. Thus, it is easy to cut things but the blade makes some coarse cuts. Here, you can do intimate cuts of the wood but it will cut the wood super-faster even if it is thick wood. This is not possible in a scroll saw, as the blade will cut only thin wood.

For manufacturing furniture, the band saw is one of the must-needed tools among others. It is easy to make curved legs using the band saw for tables and chairs.

Difference Between the Band Saw and a Scroll Saw

The main purpose of the scroll saw is to do detailed work like intricate cut patterns in the wood. Also, to create a finishing touch to the material, this saw is a must Coming to the band saw is used to cut thicker wood materials. The main purpose is to make curved cuts and angles for using the wood things in chairs and tables.

For handling big projects, you need the help of band saws. They are used to cut the big wood materials and also for woodworking using the right blades. It comes as floor-standing and bench-top models. But, now they are coming as portable versions too. During the early days, they are placed in workshops and garages generally.

Scroll saw comes as a table-top model and benchtop with wheeled designs. They are best for smaller projects. To carry out detailed work on wood and other similar materials and also to do inside cuts, this saw machine comes as the best option. Thus, the scroll saw is best for cutting smaller objects.

Coming to the weight of scroll saws will range from five to sixty pounds. Thus, scroll saws that are low weight are extremely portable. Band saws are huge and tough and they range around 250 pounds. Thus, they will not come as portable as a scroll saw.

Which is the Best for Your Needs?

If you are dealing with small projects with thin layers of wood materials, then Scroll Saw comes as the perfect option. Some of the best examples which you can use in scroll saws include wood ornaments, cutting letters, DIY jigsaw puzzles, etc. Here, in the scroll saw, you will get the most precision.

Furthermore, the important point is that a band saw is much more dangerous than a scroll saw. This is because of its huge size and power. The thing is that you need to concentrate while placing your hands on the device at all times. Additionally, ensure that you use the proper eye protection while using the saw.

From this article, it is clear that based on your requirements, you need to choose the right saw for getting your job done perfectly.

Also read: Why Were Chainsaws Invented?

Best Medicine Cabinets of 2022 for your bathroom