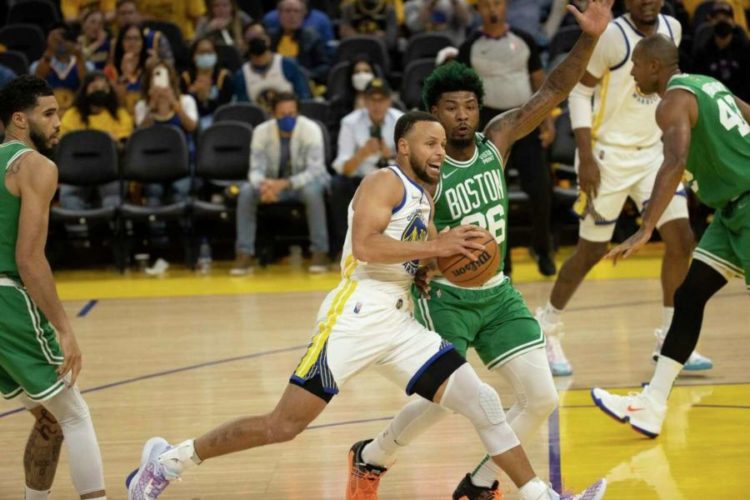 This NBA playoffs have been rather one-sided. However, the Game 1 of the NBA Finals between the Boston Celtics and the Golden State Warriors seemed to offer hope of change. We as NBA fans, always love to watch tight-ended games. We love to witness hard fights on the pitch for every single possession. Especially we expect NBA Finals to be highly competitive. The Celtics and the Warriors offered the same in their Game 1 clash in the NBA Finals.

It was a crisp and tightly contested game. As morning shows the day, Game 1 similarly hinted that this is going to be a highly competitive series. The Boston Celtics took the game home with a  120-108 scoreline in their favor. But the game was not as simple as the scoreline might suggest. In fact, the game witnessed two highly determined sides landing blows, finding counters, and grinding out possessions in a close affair.

Therefore tighten your seat belts. This article will take you back to the roller-coaster Game-1 between the Celtics and the Warriors.

The High Voltage Clash in Game 1

The Golden State Warriors have a fixed technique for the playoffs. In the first games of every playoff series, they catch the opponents off-guard with their unique motion offense. They started doing a similar thing in Game 1 against the Celtics.

In this 40-pointer fourth quarter, aberrational shooting played a big role for the Celtics. However, one cannot also overlook their superior ball movement and execution during the final eight minutes of the game. This has really been one hell of a match for the Celtics.

Boston Celtics: Players Who made The Difference

Jaylen Brown is the one who ignited the fiery performance of the Celtics. In fact, he was involved in the first 14 points of the Celtics in the fourth quarter, either by scoring or by assisting. It was also Brown who forced Steve Kerr to bring Steph Curry back into the game, earlier than usual. However, Curry did not have a memorable outing due to White and Smart. They chased down Curry, while Tatum made the right decisions on both ends.

However, AI Horford has been the standout performer for the Celtics in Game 1. With his effective defensive mobility, connective playmaking, and 3-point shooting, Horford changed the complexion of the game in the final quarter. Horford played Game 1 on the eve of his 36th birthday. In the game, he scored 26 points with six rebounds and three assists. Moreover, his shooting was great with a stat of 9-of-12. This also included his career-best shooting record of 6-of-8 from the deep.

Apart from this statistical brilliance, he also brilliantly opened up Boston.s offense. The Celtics brilliantly defended the passing, cutting, and moving without the ball technique of the Warriors. This is evident in the way in which the Warriors used Curry in ball screens.

The Warriors’ Tactics That Worked in Two Quarters

The Warriors started using Steph Curry in ball screens. They took advantage of Robert Williams’ limited mobility on the perimeter. They used his man to screen Curry. This also canceled out Williams’ role as a rim-protector. At the same time, these tactics also forced the Boston Celtics to either give away open shots to Curry or scramble to take him away.

This technique seemed to work well for the Warriors in the first and the third quarters. This also helped Curry to get going from the deep. However, the Celtics were able to shut off Curry due to Grant Williams. But as Horford went off the floor in the second half, the Curry effect restarted. The Celtics tried switching  Williams onto Curry. This isolated Curry. Ime Udoka countered this by taking off Williams and sending in Derrick White.

The Boston Celtics forced Curry to do more on-the-ball work. Thus Curry had to do more heavy lifting to get his shot off. As a result, he scored only once after Horford’s return to the pitch with 6:34 remaining. On the other hand, Horford scored two three-pointers and led the Celtics to a glorious win.

At times strategies fail to make the mark against great teamwork. The first game of the Celtics against the Warriors will remain an example of this. Horford, Brown, and others put up a brilliant performance to take the Celtics on to a blistering start. Now it remains to see how the Warriors respond to this.