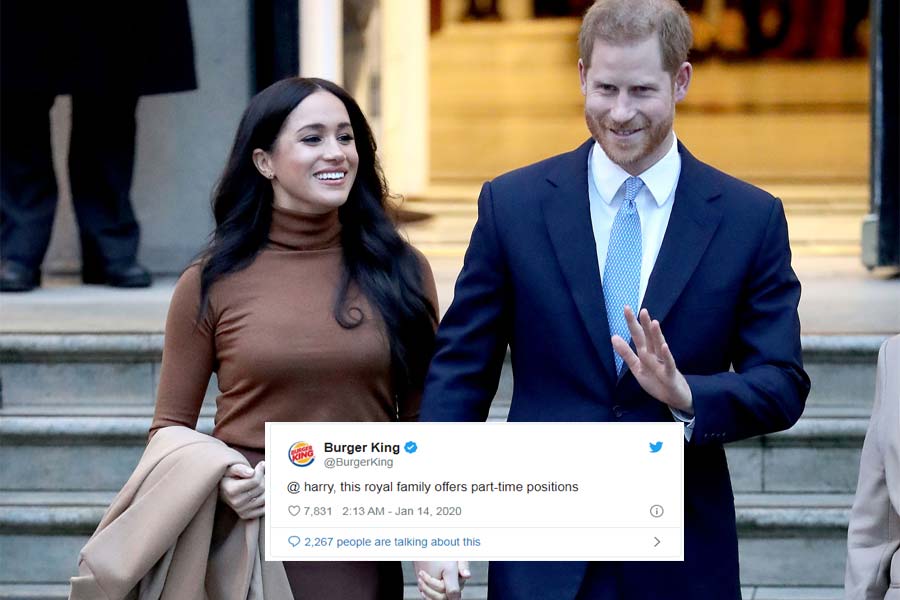 You have heard enough of Brexit, now it’s time to talk about Megxit. Didn’t get it? People have started talking about Megxit after Prince Harry and Meghan Markle has announced to step down as senior royals. People are calling it ‘savage’ as they are being trolled by the US-based fast-food chain, Burger King. They have launched a cheeky campaign where they have offered a job to the senior members of the Royal Family, Prince Harry.

you always have a job in our kingdom https://t.co/D9h23URFXz

It seems like they are trolling these royal people by offering them a part-time job. However, their savage tweet has won all over the internet and it has received around 1.5K retweets and 6.7K likes so far. The people on Twitter have also flooded the tweet with thousands of comments. Some call it ‘savage’ while some are applauding them for winning the internet.

One user tweeted, “Harry could buy out your whole corporation”

Harry could buy out your whole corporation if he chooses too so the jokes on you. ?? That is why McDonald’s fries is better than yours anyway. ??‍♂️

Another user commented, “Prince Harry deserves better than this kind of bullying and mockery.”.

You’re company is also in the business of degrading a persons personal choice. Prince Harry deserves better then this kind of bullying and mockery. Never liked your burgers anyway.

Do you know why do burger king has offered a job to them?

It is because they want to be financially dependent. So, after Burger King came to know about this, they have made them a job offer and people are making fun of it. Recently, Queen Elizabeth has also given her blessings to grandchildren, Prince Harry and Meghan Markle for their independent future.

She said, “My family and I are entirely supportive of Harry and Meghan’s desire to create a new life as a young family.”

She has also granted both of them a period of transition to split their time between Canada and Britain till the final decision is taken regarding their stepping down from the royal family.

In the official statement released on Instagram on the official account of The Duke and Duchess of Sussex, Prince Harry and Meghan Markle have announced that they have finally decided to step down as seniors from the royal family. However, this announcement has left British royals in a shock.

After that, a meeting was also held at the monarch’s private Sandringham estate where the Queen has said that further discussion is required to resolve the situation and to bring some solution forward in the next step.

I completely respect their decision! None of us knows what they have to deal with. Plus I believe that Harry is right to protect his family from the same horrible stuff that his mother had to go through! *have a heart*

How about u cook vegan food correctly first. Shame. pic.twitter.com/3SnOiKdbFq

I just want yall to improve the service. Everyone that works at my local Burger King is necer polite. C’mon now your food is great but not the dervice