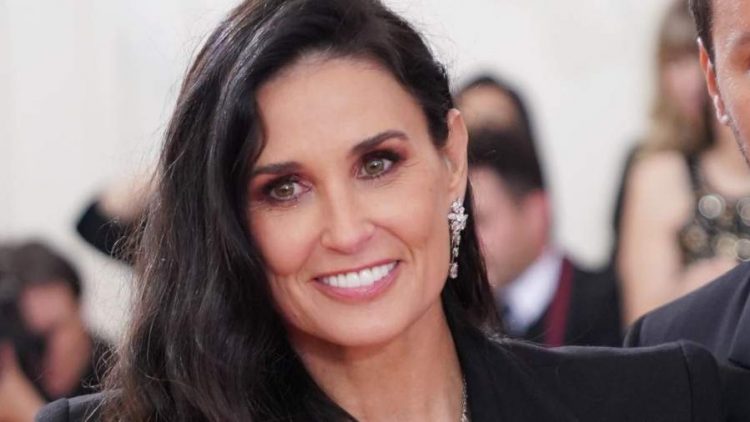 Demi Gene Moore is a popular actress and film producer. She made her debut in the film industry in 1981. Then she acted in General Hospital a soap opera and gained a lot of recognition for her role on Blame It on Rio, About Last Night, and St. Elmo’s Fire. Then she played the female lead in Ghost which became a commercial success. Now also Moore is acting in many films and has few future projects. Demi Moore age is fifty-seven. Know all the details of Demi Moore Biography here.

Moore’s birthplace is Roswell, New Mexico and her birth date is November 11, 1962. The name of her father is Charles Harmon, Sr. who is an Airforce airman and the name of her mother is Virginia. But her father left her mother when Demi was very young. Then her mother married again to Dan Guynes. Moore has a step-brother named Morgan.

She suffered from strabismus and two operations done on her eyes to correct it. When Moore was fifteen she went to live in West Hollywood, California where her mother got a job at a magazine distribution company. She went to Fairfax High School and moved out of her home at her teenage years.

Moore joined the Elite Modeling Agency and then went to drama classes to pursue an acting career. Demi Moore oui gave her recognition as she posed nude. Then she got a chance to act in the teen drama directed by Silvio Narizzano called Choices. After that, she got the chance to act in Parasite in 1982. Later she got a role in General Hospital. She played as a prostitute in We’re No Angels.

In 1990 she acted in the film Ghost which became the highest-grossing film of that year. The film got nominated for Academy Award for Best Picture and Moore the nomination of Golden Globes Award. Some of, Demi Moore movies are A Few Good Men, Mortal Thoughts, Nothing but Trouble, Indecent Proposal, Striptease and more.

Some of her films that released after the 20s are Passion of Mind, Charlie’s Angels: Full Throttle, Bobby, Half-Light, Happy Tears, Another Happy Day, Blind, Corporate Animals and more. In the future, she is going to act in Songbird which is a pandemic-themed thriller.

On February 8, 1981, she got married to Freddy Moore a singer. Then she got married to Bruce Willis on November 21, 1987. They have three daughters named Rumer Glenn Willis, Scout LaRue Willis and Tallulah Belle Willis. But they divorced in 2000. In 2003 Moore started to date Ashton Kutcher who is fifteen years younger than her. Then they married and divorced because of irreconcilable differences.

On August 1991, Moore posed nude on the cover of Vanity Fair while she was seven months pregnant. This drew lot of public attention and was the talk of the town. Many people called it an empowering move but others criticized it as sexual objectification.

What is The net worth of Demi Moore?

Demi Moore net worth is $200 million. Her pictures have appeared in many magazines that became popular such as Elle, Rolling Stone, Glamour, Marie Claire and more. The actress has played parts in many commercially successful films. She is also a film producer.

Demi Moore is a great actor. She is a determined and bold woman. She is a good mother and is supporting many charities in many parts of the world.

Also read: 6 Different Kind of Girls You will Come Across if You are Planning for An Arranged Marriage for Yourself