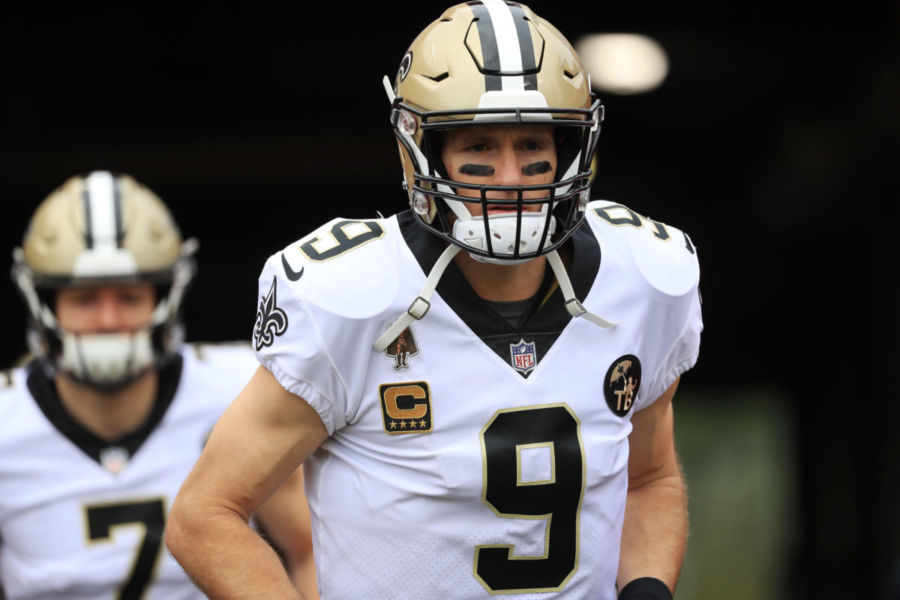 Drew Brees came under the spotlight recently, as rumors about his return to NBA gains ground. In the world of sports, instances of comebacks from retirement, are not rare. In the recent past, we have seen Lionel Messi coming out of his retirement to play for Argentina. Again In 1978, we had Johan Cruyff coming out of his retirement. Such instances abound in the sporting world. Again, apart from real comebacks, rumors regarding a player’s comeback can also be found in the media.

Some of these rumors were true, while most others were false. The recent addition to this list of rumored comebacks is that of Drew Brees. Back in 2021, Brees retired from the New Orleans Saints. Following his retirement, NBC hired him, to work on the network’s studio show, Football Night in America. However, his first stint with NBC has been mediocre. Thus, rumors are out that he will not be a part of NBC’s plan for 2022.

However, Brees said that nothing can be said firmly about that at the moment. Instead, he went on to hint at his possible NFL comeback. Read the article to discover more about this.

In 2021 when Drew Brees retired, following the 2020 season. He was one of the greatest quarterbacks of his generation. When he hung up his boots, Drew was the No. 2 QB in the NFL history, in passing yards, passing yards per game, passing touchdowns, completion, and attempts. The Super Bowl Champ is also a 13-time Pro Bowler. Thus, he had a highly effective presence in the field.

However, his effectiveness in the studio is something that does not go with his on-field effectiveness. On Football Night in America, his performance has been rather mediocre. Thus as NBC prepares its plans for 2022, it seems that neither Brees nor NBC showed any interest in working together. The New York Post reports that certain sources suggest that Brees will not be returning on the sets of Football Nights in America. They further report that the decision seems to be a mutual one.

Brees Tweets His Take on The Rumour

With the rumours about Drew Brees leaving NBC gaining ground, the famed QB took to Twitter to let us know of his mind at the moment. Click on the link below to see Brees’ tweet:

In the tweet, Brees claimed that his future with the NBC remains uncertain, as he himself seems to be undecided at the moment. However, in this tweet, Brees has also suggested that he may play football again, despite having retired in 2021. This is what has resulted in speculations and rumors about his possible comeback. Again, adding to this comeback narrative, Drew Brees tweeted another post.

However, amid these speculations about his future, an article in New York Post suggests that Bress could head to Fox as a color man. But his return to the foot is less likely to happen.

A Comeback is Unlikley for Brees

In 2021 when Drew Brees retired from football, the decision seemed just. It is true that he led the Saints to the playoffs in the last season, but his arm strength has decreased considerably. In the last two campaigns, Brees threw less than 3000 yards. This is considerably low when compared to his throws before 2019.

Apart from the age factor, a shoulder injury that Drew sustained during his final season in San Diego, seems to contribute to the loss of arm strength. Recently, Dew Brees had surgery on his shoulders, and as per reports from ESPN, he would not be able to play till September or October. In addition to this, if he returns to the field, New Orleans will be his only option. But the Orleans has a steady OB line with the likes of  Jameis Winston, Andy Dalton, and Ian Book.

Given the physical condition of Drew Brees, it will be difficult for him to return to the field. Moreover, the Orleans look settled in the QB and are less likely to alter their shape. Thus, a comeback for Brees seems less likely. But, nothing can be said for sure, as long as Drew himself remains shut on this matter. But if the Hall-of-Famers manages to make a comeback, that will be an interesting thing to watch.