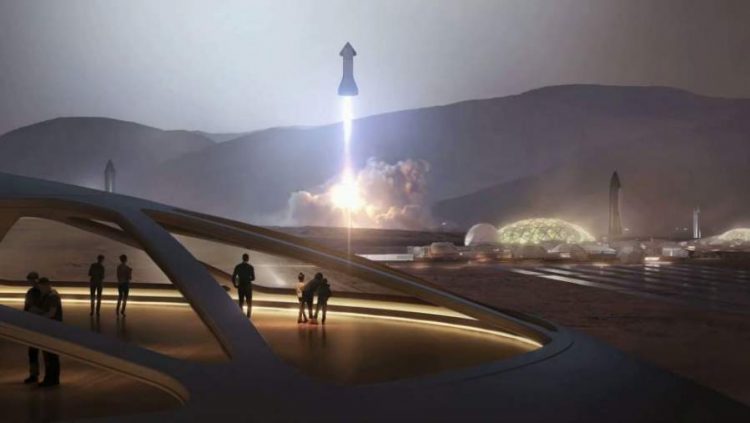 An artist's depiction of SpaceX Starships on Mars. (Image: © Spacex)

Elon Musk has got awarded by Axel Springer because of his creative inventions and his leadership in SpaceX. He also got interviewed by the media that asked about the vision of his company. So Musk has revealed some of the impressive details about SpaceX. He also has talked about his long time plans.

The SpaceX which is a large American space technology company is getting ready to send its SN8 Starship to Mars. This information created a stir in the science world. That is why the Axel Springer honoured Musk with Axel Springer Award 2020 for his advancements in space tech. Musk visited the headquarters of the company in Berlin, Germany to receive the honour. Then after the ceremony, he sat for an interview with Mathias Döpfner who is the CEO of Axel Springer. They talked about Tesla and SpaceX and Elon Musk shared a lot of valuable information.

He revealed the timeline and schedule of the flights to the red planet. He said that the spaceship will have two phases. There will be a mission without a crew and also a one that will get led by humans. This will happen in the next six years.

The travels of the spaceship termed as interplanetary. Elon Musk shared that the journey will take place with stainless steel spacecraft named SN8 Starship. It can hold up to a hundred people. Now the company is developing the rocket in Boca Chica, Texas and they are doing it quickly. Musk shared that the rocket must go on hundreds of missions before it reaches the milestone.

StarShip SN8 undergoing inspections prior to its flight attempt, as of now static fire is canceled and will be proceeding into the flight window beginning Wednesday; which will concur Friday. Still no posted TFR’s and all is subject to change. The anticipation is building up!? pic.twitter.com/I7RgvNA7ho

The earliest mission may happen in two years according to Elon Musk’s plans. This phase of the journey will happen without any humans. The next mission will take place in six years and this phase will contain astronauts, pilots, and engineers who will travel to the red planet. Musk did not share whether his plans are in a joint venture with NASA.

However, he was very clear about his plans with SpaceX. He hopes that he can lessen the travel time to Mars with his findings and inventions. Mars revolution around the Moon is double that of the earth so it takes the red planet twenty-six months to circle the sun.

Elon Musk is fully confident of his company’s missions. He said that humans will land on the red planet by 2026 and if fortunate in four years.

The inventions of Elon Musk’s company are taking the world by the storm. He has great ideas for the future. Many people are hoping that he can make his dreams come true.

Also read: Dubai’s “The Floating Seahorses” Villas are All You Need To Know About