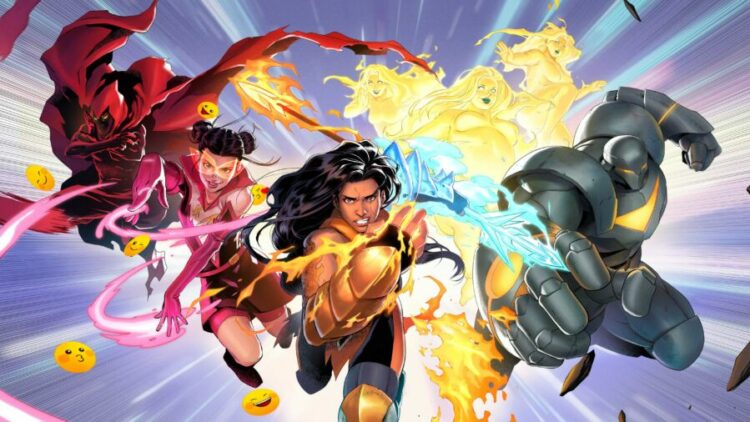 Emergents TCG is a Tezos blockchain-based Trading Card Game developed by the Web3-based digital entertainment firm InterPop that allows players to own their in-game products. The Emergents Super Hero Universe is the setting for this top-down design-driven game.

In the last week alone, Emergents TCG has onboarded over 6500 users. Is it thus one of the best blockchain games in its category? Continue reading for more information.

What is Emergents TCG?

InterPop debuted its first five comic book series on the Tezos blockchain last year, including The Nine, Emergents Presents, #ZOEMG, The Abyss, and The Rejects, creating a superhero world with all publications available digitally via its InterPop Comics reading platform.

The Emergents TCG not only draws on this expanding universe and its rich tales to provide an exciting playing experience, but it also uses the power of the Tezos blockchain to convert cards into digital valuables.

As a result, players may acquire cards, cosmetics, and other game assets with nearly any wallet in the Tezos network. This can save up to 1.5 million times the energy of other tokens.

Emergents TCG, a strategy-first card game on the Tezos blockchain, has launched its Public Beta, delivering a gameplay experience that is less punishing than free-to-play and less impenetrable than blockchain game economies.

The game focuses on gameplay experiences appropriate for the age of mobile gaming. The Public Beta is already underway, and from August 18th, players will be able to purchase a unique drop to mark the game’s premiere – The Super Booster. The packs, with original imagery not seen anywhere in the game, will be ready to open upon purchase, and it will play the cards straight away.

The all-promo “Super Booster” card pack had a ton of added content and was only available to the whitelist. Fans may join this list by purchasing any comic NFT from interpopcomics.com or any promo card from the future trading card game, which it can find at https://minterpop.com/emergentstcg.

Emergents TCG, being a Web 2.5 game, includes all of the social logins and paradigms players are accustomed to from Web 2, such as social logins and credit card payments while having actual ownership unlocked by the blockchain.

There are two types of packs available; players may buy them for 50 and 175 tez, respectively, or with a credit card. The two levels of packs will feature a variety of simpler NFTs objects, as shown below, however not all things will be included in each pack:

Emergents TCG blends the greatest digital TCG gaming with a fresh new economic experience. This allows the game to match the digital age’s demand for speedy action without sacrificing the depth of experience that many other card games in the genre do.

Anyone dissatisfied with the so-called “free to play” model of current Trading Card Games will appreciate the opportunity to sell and exchange the cards they purchase, which has been notably absent in FTP experiences. Other blockchain games have sought to fill the hole, but their economies are sophisticated and based on insider crypto expertise.

Meanwhile, you’ll be able to play Emergents TCG whether you’re new to Blockchains or acquainted with them because blockchain technology gives users total ownership and control over their cards. The cards on the blockchain function as distinct entities.

Players can trade, sell, and trace their card history. To enjoy the Emergents TCG, players will not need to understand how Tezos or Blockchain functions.

As previously stated, the Emergents TCG Super Boosters contain digital comics, player avatars, and a chance to win one of 28 pages of tangible, original comic book art, which can appeal to both comic book lovers and those who appreciate NFTs and digital art.

With such staff and creative skill, the firm hopes to bridge the gap between cutting-edge technology and traditional fandom events. As a result, they can create completely distinct experiences for users without jeopardizing the nostalgia of collectibles, comics, and gaming culture.

How does the Emergents TCG operate?

The Emergents universe, which serves as the background for InterPop’s comic series, sells NFTs cards and actual digital ownership. This ownership allows players to interact with the material and influence the story’s ending.

Through voting, you will influence decisions ranging from the cosmetic to the cosmic, with actual implications and a long-term impact on the Emergents. The cards represent the Tezos network. As a result, gamers may either sell the item for real money or use it in an Emergents game.

Players will be able to obtain new cards through auctions. As soon as they auction off the cards, gamers can buy them directly from the game or swap them with friends.

It saves a player’s NFT assets in the game in their digital Kukai wallet, an electronic wallet where users may store and deal using Tezos coins. You may also transfer your game asset NFTs from your gaming account’s Kukai Wallet to other wallets.

Emergents TCG is the next great Trading Card Game on the market, combining the complex strategy of traditional TCGs, the ease and rapid pace of digital TCGs, and the digital ownership of Web3. It gives users total ownership and control over their cards, and the game is also exciting and entertaining.

With the ease and speed of Hearthstone and the strategic complexity of MTG, it is simple to tell that Emergents TCG is a high-quality game created by the industry’s top minds. If you think this game seems like a lot of fun, you may begin playing immediately!

Also read: The Reason Why The Crypto World Keeps Wobbling is Hard to Define.. Or is it?