How To Find Out The Difference Between Male And Female Marijuana Plants? 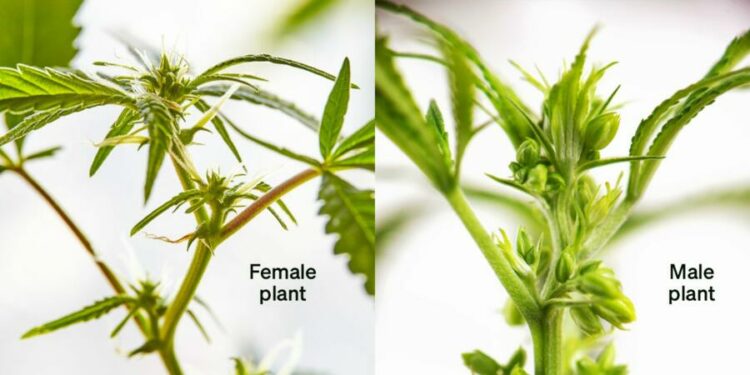 Do most people doubt the genders of the weeds? Do they even think about whether there exists a difference between male and female marijuana plants? Let us explore the same in this article.

Similar to human beings and animals, even plants have male and female genders. Coming to the weeds, male and female marijuana plants exist on this earth. While growing weeds, the type of weed plays a crucial role. It helps in getting the right value and quality in the final stage.

Main Difference Between Male And Female Marijuana Plants That You May Find:

Female marijuana plants have great value in the market for their high THC buds. So, it is clear that male weeds have fewer psychoactive effects. Though you consume it in a high quantity, it will not feel high.

How To Identify Male Cannabis Plants?

The early signs of a male plant are that it will produce male flowers within 3 to 4 weeks. Such flowers look like little balls and are pollen sacs carrying pollen grains in them. The male plants don’t have the capacity to produce buds. However, such plants help female plants with pollination resulting in more seeds.

Once these male plants’ pollen sacs are open, they will help for pollinating. Not only does this crop also help most plants to grow within the range of 5 km.

If you are looking for the early signs of a male plant, it will be taller. Also, male plants are not bushy like female plants. If you want to produce seeds in a controlled environment, you need to concentrate on pollination.

Thus, the thicker stalk will support the weight of the plants effectively. Furthermore, male plants have fewer leaves when compared to female plants.

Soon after determining the sex of the plant, you can get rid of the male plant. This will prevent spoiling your crop. Never remove the buds using a bare hand, as it will even decrease your crop.

Most growers simply throw the male plant while a few keep them for breeding. If you want to grow both male and female cannabis plants, then you can try out separate rooms for them. So the early signs of male plants are,

How To Identify Female Cannabis Plants?

Check For 4 – 6 Weeks From Germination:

Usually, the pre-flowers in female cannabis plants appear between 4 and 6 weeks from germination. In such a period, the female plants will get 5 to 6 internodes. Here the pre-flowers look like white hairs in V form.

You can notice such white hairs coming out from the green calyx. The structure of such white hairs is known as ‘pistils.’ Then, the pre-flowers lead to the formation of clusters named ‘Buds.’

Look Out The Stalk Of Female Plants:

Female Plants Are Shorter Then Male:

When you compare female with male marijuana plants, you will notice a major difference in their height. Usually, they are shorter than male plants but remain bushy with many leaves. So the characteristics of female cannabis plants are,

What Are Hermaphrodite Plants?

When a female cannabis plant grew in a stressed condition, it might have both male and female sex organs in it. Such a plant is the Hermaphrodite plant. Since it has both sex organs, it will pollinate and spoil the entire crop. So, it is better to remove this plant from the other plants when you discover it.

But it is difficult to monitor and remove such hermaphrodite plants from them. To prevent this condition, you can avoid plant stressors like

It is not so easy to grow a marijuana plant in a healthy condition. So, it is almost a rewarding process that requires much more care to get the best result.

Once you find out male and hermaphrodite plants in your garden, you need to remove them for safer results. Also, ensure that you take care of the cannabis plants in a healthy condition.

Also, you shouldn’t grow both male and female plants together. Ensure that you separate them and remove the male cannabis plants completely. It will act as a hindrance to the growth of female plants. Thus, it is better to eliminate them when you see the growth of male plants.

This article gives you an idea about how to differentiate male cannabis from female plants. It is easy to identify both weeds using some tips as discussed above.’