Get to Know The Tools & Editors in Unreal Engine in Detail 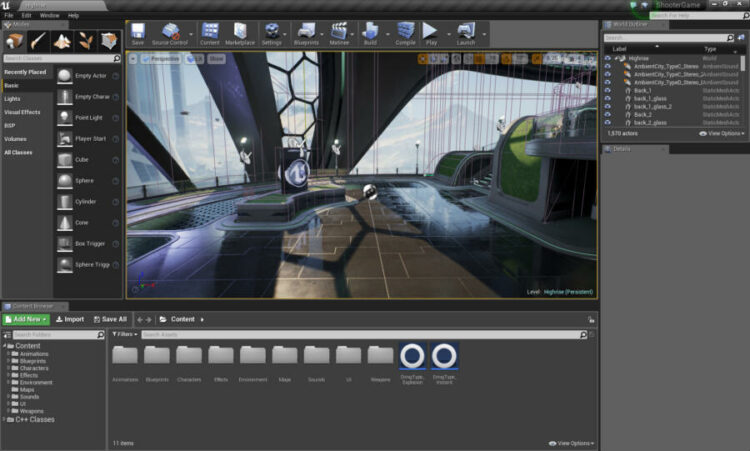 Unreal Engine is a powerful game engine used for creating games and interactive applications. It comes with a plethora of tools and editors that allow developers to easily create stunning visuals, immersive experiences, and engaging gameplay. In this guide, we will provide an overview of the different tools and editors available in Unreal Engine, as well as their functions.

Read on to learn more about the tools and editors available in Unreal Engine!

An Overview of Unreal Engine

Unreal Engine is a powerful game engine used to create interactive 3D and 2D experiences. It has been used in many popular games such as Fortnite, Gears of War, and Batman: Arkham Knight. Unreal Engine provides a wide range of tools that can be used to make stunning visuals and realistic environments. Its user-friendly interface makes it easy for developers to get started quickly in creating their desired projects.

Tool and Editors in Unreal Engine

The Material Editor is a powerful tool for creating and manipulating material assets within Unreal Engine. It allows you to create complex materials with multiple layers and parameters, as well as easily edit existing assets. The Material Editor also has a library of commonly used textures, patterns, colors, and other elements that can be quickly added to your project.

You have the ability to control how each layer of the material interacts with light sources, giving you complete control over the look of your scene’s surfaces.

The Unreal Motion Graphics (UMG) UI Editor is a powerful tool for creating and designing user interfaces in Unreal Engine. It allows developers to quickly create modern and visually pleasing user interfaces without having to learn complex coding languages.

With the UMG UI Editor, you can create menus, HUDs (heads-up displays), buttons, sliders, textboxes and more with just a few clicks. It also supports custom widgets and animations so you can easily customize your UI elements to match the look and feel of your game or application.

The Static Mesh Editor allows you to create, edit and manage individual static mesh assets. It consists of several features that make it easy to design, modify and optimize meshes for use in game or other projects. You can create new meshes from scratch or edit existing ones with a variety of tools such as transform, extrude, bevel, boolean operations and vertex/edge/face modifications. The editor also provides advanced options for UV mapping, vertex colors, materials and lighting settings.

Niagara Editor is the Unreal Engine’s powerful particle system editor. It allows you to create and animate your own custom particles, including smoke, fire, dust clouds, explosions, sparks and much more. With its intuitive user interface and comprehensive set of tools, the Niagara Editor makes it easy to bring your vision to life. Its visual scripting system allows you to quickly create complex effects without any coding knowledge.

The Font Editor in Unreal Engine allows users to create their own fonts with a wide range of customizable options. It is an invaluable tool for game developers who need to quickly create and edit custom fonts for their games. The Font Editor has several different tools such as the Vector Tool, Paint Tool, Text Tool, Texture Tool, and Glyph Tool.

These tools allow users to easily adjust font settings such as character size and kerning, as well as apply textures and other effects to create unique-looking fonts.

The Behavior Tree Editor allows users to create complex AI Behaviors in Unreal Engine. It is a visual scripting tool that enables users to easily define relationships between various tasks and set up logic for the environment. This editor lets users control how their AI characters will interact with their environment, as well as allowing them to customize behaviors based on input variables.

A game development company can make use of the Behavior Tree Editor to craft AI gameplay and create challenging experiences.

The Animation Editor in Unreal Engine enables you to create and modify animations for characters, objects, and other entities. It allows you to alter the motion of an animation, change the timing of a sequence, adjust the position or trajectory of a character’s movement, and more. You can also add new animations using the Capture Browser feature. The Animation Editor supports both 2D and 3D animation styles.

Unreal Engine provides an extensive suite of tools and editors that allow for powerful, accessible game development. Whether you are a seasoned game developer or just starting out in the industry, Unreal Engine has something to offer. Its intuitive workflow-oriented interface makes it easy to develop games quickly and efficiently, while its powerful features make it possible to create high-quality experiences that stand out from the crowd.

With a wide variety of options available, Unreal Engine is sure to have the right set of tools and editors to help you realize your vision.