8 High-School or College K-Dramas Based on Manga 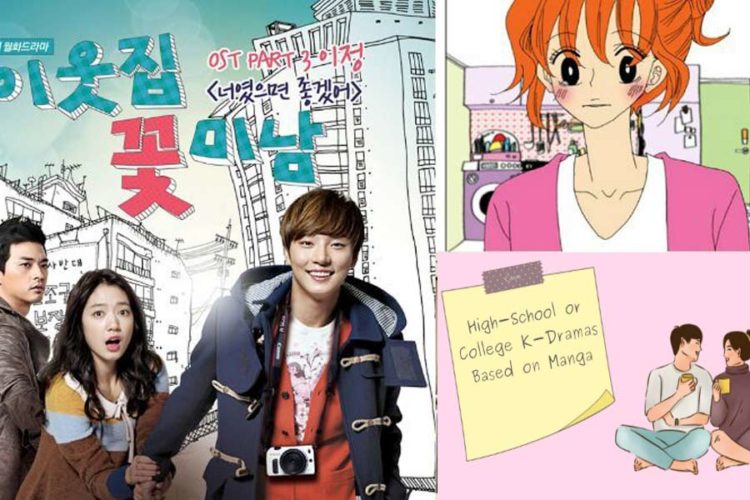 There are so many high-school and college K-dramas out there, but have you ever wondered which ones are based on manga? Manga has been around for a long time, and there are many different types of manga. Manga is a great source of material for college K-dramas about students, so we decided to make a list of the best ones. K-dramas may help you study and overcome challenges that come your way. If you’re stuck trying to rearrange your essay or rephrase your sentences, sometimes it helps to shift your gaze to something else, distract yourself and then take up the task with renewed vigor.

So, if you like manga and K-dramas, then this list is for you! Check the list of Korean dramas for students adapted from manga and pick one to read or to watch:

This college K-drama is based on the manga “Itzura na Kiss” by Kaoru Tada. It’s a classic love story that follows two high school students as they fall in love with each other.

The plot of “Playful Kiss” is about a high school girl named Oh Ha Ni who is not very popular with the boys. She falls in love with a boy named Baek Seung Jo, who is the smartest and most popular boy in her class. However, he does not seem to notice her at all. One day, after a huge earthquake hits her hometown, Ha Ni’s house is destroyed, and she has to live with Seung Jo and his family. Living together brings them closer, and they start to develop feelings for each other.

If you’re a fan of romantic K-dramas, then this is definitely one that you should check out!

Based on the manga “Liar Game” by Shinobu Kaitani. The story follows a college student named Nao Kanzaki who is tricked into participating in a game called the Liar Game. Nao Kanzaki is a very honest person, so, she has to use all of her cunning and wit to survive. She is also the only one who can recognize any of the lies and deceptions that go on in the game, owing to her unmatched honesty. The story is full of suspense and action, and it’s definitely a must-watch for any fan of K-dramas.

If you’re searching for a K-drama with lots of suspense and intrigue, this is one that you should try out!

Based on the manga “Nodame Cantabile” by Tomoko Ninomiya.

The story of “Nodame Cantabile” is about two music students named Megumi “Nodame” Noda and Shinichi Chiaki. They both attend the same music conservatory in Japan, and they fall in love with each other. Noda has a very carefree and playful personality, while Chiaki is a perfectionist who is always striving to be the best.

If you enjoy musical college K-dramas, this is one you should definitely watch!

Based on the manga “Dragon Zakura” by Mita Norifusa. The story of Master of Study is about a group of high school students who are given the opportunity to attend a prestigious university. The students must study hard and pass all of their exams in order to be accepted into the university.

It is quite possibly the drama with the biggest stars and the highest production value on this list.

Bae Yong Joon, better known to most as the “Korean Brad Pitt” stars as Kang Suk Ho. He is a lawyer who gives up everything to become the students’ teacher so that they can achieve their dreams. Yoo Seung Ho, who some may remember from the popular drama “I Miss You” plays the role of Kim Soo Chang. He is one of the students who is trying to get into the university.

This is a feel-good K-drama that will inspire you to study hard and follow your dreams!

Based On: Manga named “Hana Yori Dango” by Yoko Kamio. It is a story of love and friendship between four rich boys and a poor girl named Geum Jan Di who attends the school on scholarship.

The plot of “Boys Over Flowers” is about a group of four rich and handsome boys known as the “F-Four” at an elite high school. The boys are the sons of wealthy families, and they are used to getting whatever they want. One day, a poor girl named Geum Jan Di attends the school on scholarship. She is not afraid to stand up to the “F-Four”, and she quickly becomes their enemy. However, as time goes by, the boys start to develop feelings for her.

This is a classic K-drama that has been loved by many for years! If you’re looking for a drama with great characters and a captivating story, then this is one you should definitely watch!

6. To The Beautiful You

Based on: Hisaya Nakajo’s manga series “Hanazakari no Kimitachi e” (“For You in Full Blossom”), commonly known as “Hana Kimi.”

The story of “To The Beautiful You” is about a girl named Goo Joo Yeon who pretends to be a boy so she can enter an all-male high school. There she meets Kang Tae Joon, who is one of the students at the school. Tae Joon is a talented athlete with a secret. He has never been able to recover from the trauma of witnessing his mother’s death when he was a child.

Joo Yeon and Tae Joon become friends, and they help each other heal their emotional wounds. This is a heartwarming college K-drama that will leave you feeling inspired!

Based on: Manga and anime “Nodame Contabile” by Tomoko Ninomiya. It tells a story of music and love between two students at a music conservatory in Japan. The girl, Noda Megumi, aka “Nodame,” is a free-spirited piano student who doesn’t take anything seriously. The boy, Chiaki Shinichi, is a talented and perfectionist violinist who comes from a wealthy family.

Nodame and Chiaki meet by chance, and they quickly become friends. However, their relationship is complicated by the fact that Chiaki is secretly in love with Nodame’s best friend, Mine Ryutaro.

This is a beautiful K-drama that will touch your heart and make you appreciate the power of music!

8. My ID is Gangnam Beauty

The story of “My ID is Gangnam Beauty” is about a girl named Lim Ji Woo who has undergone plastic surgery to make herself look prettier. She meets a boy named Kyung Seok who is handsome but doesn’t believe in love. Kyung Seok starts to have feelings for Ji Woo, but he is afraid to admit it because he doesn’t want to be hurt again.

This is a great college K-drama for anyone who is looking for a story that is both funny and touching.

Manga script stories are often more lighthearted than their K-drama counterparts, but don’t let that fool you into thinking they’re not worth your time. These stories are usually easy to get into, and you’ll quickly find yourself invested in the characters and their lives. Manga is a great source of material for college K-dramas, and there are plenty of high school and college based manga to choose from. If you’re a fan of any of these genres, then be sure to give them a try. You might just find your new favorite show.

Manga script writers seem to have a knack for creating interesting and lovable characters, as well as plots that keep you guessing until the very end.