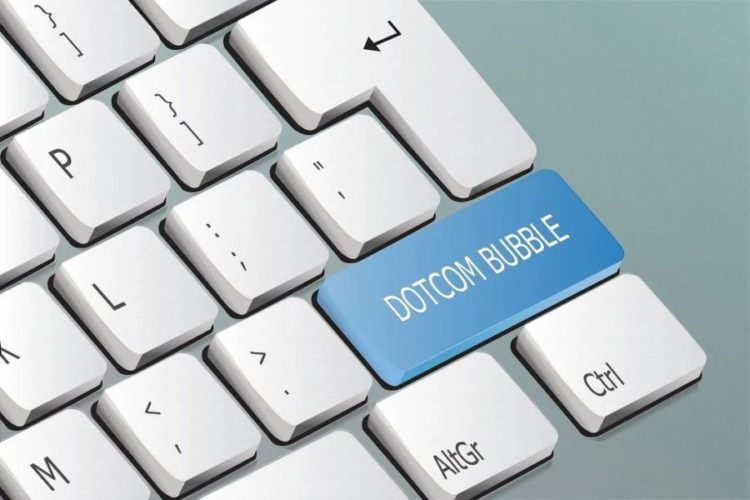 The Dot-Com Bubble is a stock market bubble that happened due to speculation in the dotcom and the internet businesses from 1995 to 2000. It mostly involved companies with a .com domain on their internet address. Its origins can be traced to the launch of the World Wide Web in 1989. It was the time when the internet was just the beginning.

This internet led to a euphoric attitude in businesses. Particularly the Dot-Com Bubble is a period between the years 1995 and 2000 when investors put their money on Internet-based startups. They had hopes that they will get a huge profit because they assumed that the future of the internet is great. The investments were made on dot-coms because of the .com domains. But it did not end well for all because many companies became bankrupt. Here you can know about the history, impact and cause and effect of the Dot-Com Bubble.

What was the Dot-Com Bubble?

The Dot-Com Bubble was one of the notable events in US history. There was a rise in the U.S. technology stock equity valuations backed by the U.S. technology stock equity valuations in the 1990s. The value of the equity market increased during this period. Plus it also dominated the Nasdaq index rising it 1,000 to more than 5,000 from 1995 to 2000. But things began to change in 2000 as the bubble burst. It was known as the Dot-Com Bubble Burst and it happened between 2001 and 2002.

In 2001 most of the stocks went bust. For instance, the share prices of the blue-chip technology stocks such as Cisco, Intel, and Oracle lost their value. After that, it took over fifteen years for Nasdaq to recover its peak and it happened in 2015.

So we can say that Dot-Com Bubble became popular because of fad investing. Investors poured their money into internet startups in the 1990s so they can profit a lot.  But they forgot about adopting a cautious approach to investing in it. Also, the startups were ready to become big and they started to spend a fortune on marketing. Some of them even spent 90% of their budget on advertising. Therefore there were a lot of bad decisions during the Dot-Com Bubble.

How did the Dot-Com Bubble burst?

The 1990s was a period of the coming of new innovative technologies. These are popularly used today no doubt about that. But one of the foremost techs that were commercialized to the core was the internet. They were known as the dotcom companies which fueled the stock market surge in 1995.

The bubble that resulted for the next five years was made trendy because of cheap money, easy capital, market overconfidence and speculation. The capitalists were overjoyed to find the next big thing because they thought that the internet was the future. They started to freely invest in the so-called dot.com companies. Plus the valuations were based on the income and the profits that will result from the business model if it is a success. Because of this, the investors were willing to forget about the traditional fundamentals.

Some of the companies were yet to get revenues and profits and even finished products. In the market, the IPOs experienced an increase in their stock. This situation lured the crowd of investors. On March 10, 2000, the Nasdaq index peaked and doubled when compared to the previous year. Many of the leading high-tech companies like Dell and Cisco put huge sell orders on stocks when their market peaked.

Further, it sparked panic selling among investors. But after a few weeks, the stock market lost 10% of its value. This led to the investment capital drying up so this stopped the lifeblood of the dotcom companies. The dotcom companies within a few months became worthless. Many publicly-traded dotcom companies started to fold and lots of dollars of investment capital evaporated. Therefore this was a time that distressed the investors and the booming internet companies. But in a few years, everything came back to normal.

How to avoid another Internet bubble?

One less in the internet bubble burst is not enough for the investors and the world around us. This is because still, investors are investing large sums in the tech giants. Now there are social media is dominating everything. So there may be yet another same like the dot-com crisis waiting to happen.

What are the platforms that can lead to Dot-Com Bubble Burst?

Facebook is valued at $84 billion and also may be worth up to $100 billion if its stock goes public. One time Facebook revealed its advertising revenue to be $1.86 billion. But they did not reveal their profit. It may be likely lower than the advertising revenues. Yet it is difficult to believe that it is worth $100 billion.

This company came to the public and the stock was $45 a share. Now its stock is trading at more than $90. This indicates that the investors want to get a high rate of return from the shares. But there is still evidence of the company heading for a bubble. It operates on a small profit margin and got $2 million in profit in 2010. But even though it has a modest profit, LinkedIn is valued at $9.6 billion.

This is another social media network company which is popular today. It has more than 200 million active users. Plus it is also keeping afloat because of plenty of investors. Yet many are also going as far as to say that it is part of a Ponzi scheme. The investors are not thinking about the income into account when valuing Twitter. It’s worth is between $8 and $10 billion. This is huge because there is no meaningful revenue stream.

Popularity is not profitability

We cannot always say that a popular platform or an object is profitable. It may receive a lot of attention from the crowd but it may not be worth investing in. So rather than focusing on what companies are having the buzz you have to check what companies are following solid business fundamentals. Sometimes popular companies can be overconfident and can make bad financial decisions that may result in business collapse. This can affect the investors too.

Lots of companies are speculative

The companies are valued by measuring their future profitability. But you have to understand that speculative investments can be dangerous. So do not be overly optimistic. One example of such is Facebook. In the future, Facebook may not be like this anymore because new innovations can mar its success.

Do not invest in a company that does not have good business models. They will know how to handle any unexpected issues in the future. You have to know how they are generating revenue and it has to be meaningful.

Correlation with the stock market

You have to know about the company’s beta coefficient. One best value is the historical correlative coefficient which states the degree to which the stock changes with the economy. You will know how much the stock increases when the market increases and form a correct value.

These are the details you have to know about the Dot-Com Bubble. It is really helpful if you know about how the stock market works and its impact on popular companies. Therefore you can become a wise investor.